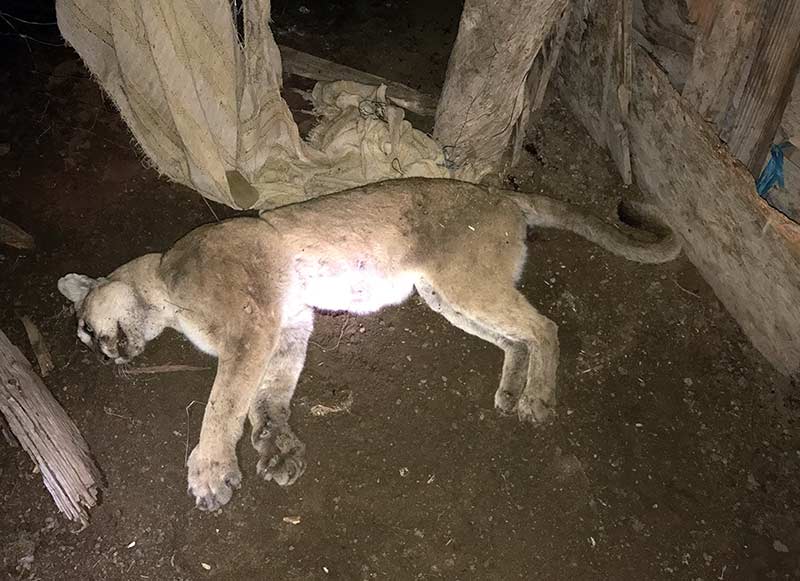 Submitted
A photo taken by Crystal Lee, the niece of Amos Redhair, shows a mountain lion that was killed by Redhair’s son, Joe Redhair, Wednesday night about four miles east of the Black Mesa Chapter in Black Mesa, Ariz. Thirteen of Redhair’s sheep were killed.

Livestock owners living in the Black Mesa, Ariz. area are on edge after a trio of mountain lions killed 20 sheep recently.

According to Amos Johnson, a Natural Resources Specialist supervisor stationed in the BIA Navajo Partitioned Land Office in Pinon, Ariz., at least one mountain lion has been killed. The two remaining lions are still on the loose.

Then on March 28, at the residence of Amos Redhair, 13 sheep were found killed and with two having been eaten. 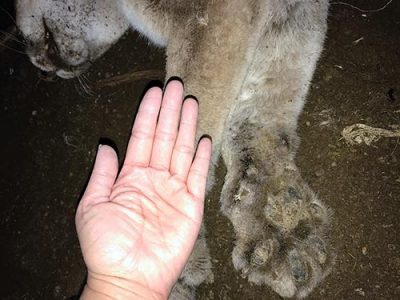 Submitted
Crystal Lee, the niece of Amos Redhair, uses her hand to show the size of the mountain lion’s paw Wednesday night. Lee said her cousin, Joe Redhair, killed the mountain lion when he found it trapped in a snare that was set by Navajo Nation Fish and Wildlife officials.

Johnson said he reported the attacks and killings to Tytus Sandoval and Dondi Begay, both with the Navajo Nation Fish & Wildlife Department. Predator Control Officer Charles Blacksheep was then called in to set snares for the lions.

The three officers settled into their campsite and waited. The officers had also brought nine hound dogs that specialize in tracking lions and bears.

Later that night, Begay said they were notified a lion was killed. Redhair’s son, Joe Redhair, shot and killed one of the mountain lions as it was trying to escape from one of the snares, said Johnson.

The Fish and Wildlife officers then took the deceased mountain lion with them after investigating the slaughtered sheep.

The lion that Joe Redhair had shot and killed was an 80-pound female cat, about eight years old, said Begay. He based the age of the female cat on how much teeth she had, which were mostly missing.

Begay would not confirm there were two other lions remaining because he did not see them, but did say that based on the evidence he saw at Redhair’s residence, it appeared there was more than one lion because a lion does not waste its energy once it has killed its prey. He did add that if there were other lions involved, then it probably was the old female’s cubs.

Johnson said the 20 sheep being killed troubled him and something had to be done.

“The (Black Mesa) Chapter is looking at hiring hired guns and trappers to go after the two (remaining) mountain lions,” Johnson said. “If they’re juveniles, then they have the taste of sheep and how easy it is to kill them.”

However, Begay, who is only one of five Fish and Wildlife Dept. officers who patrol the entire reservation, said the chapter would have to go through their office first and make their request because hunting is not permitted on the reservation without a permit because the Navajo Nation owns and protects the wildlife.

Black Mesa grazing official Francis Honie said about 50 homesteads in the Black Mesa Chapter area have animals. He said that concerns him because another mountain lion attack will inevitably happen.

Johnson and Honie said mountain lion attacks have been happening throughout past years. But with 20 sheep being killed by “a pack” of mountain lions that causes them to worry because the lions could eventually attack humans.

Begay said that in his 20 years as a Fish and Wildlife Officer, there’s never been a report of a mountain lion attacking a human on the reservation.

Begay said a majority of the time mountain lions will leave sheep and other domesticated animals alone, but did say people should understand that when people move into a remote area of the reservation, it is the people moving into the lion’s territory, rather than a lion moving into theirs.

Begay recommends that people living with livestock and sheep in remote areas, should protect their animals by keeping a constant eye on them.

“If you see claws, then it is not a lion’s because they retract their claws,” Begay said. “Dogs don’t retract theirs.”