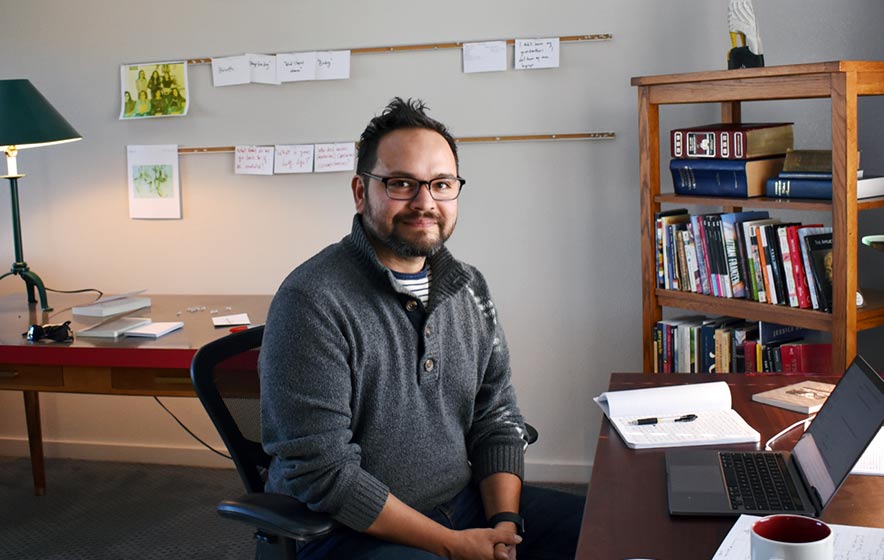 One of the few careers that has actually benefitted from the coronavirus pandemic is writing. Publishing houses have reported new manuscripts surging along with virus cases, presumably because being in quarantine (or losing a day job) has given prospective writers the time to finally focus on that unfinished novel or memoir.

One new piece that fans of Diné writers can look forward to is Brendan Shay Basham’s debut novel “Swim Home to the Vanished,” which he hopes to sell this year. Basham, Totsohnii born for bilagáana, is no stranger to writing — his poetry, essays and short stories have been widely published and read aloud on podcasts, and he has won several literary awards — but at 39, he finally felt mature enough to tackle full-length fiction.

“We have to live before we can write, right?” Basham asked rhetorically during a recent phone interview. Not yet into his fourth decade, Basham has lived enough for three lives. He was born in Alaska, raised in Northern Arizona, and followed a girlfriend to Puerto Rico where he started out as a chef and ended up running two restaurants before returning to the States in 2015 to launch his writing career in earnest.

He’s currently residing in Nashville, where he serves as the Writers in Schools coordinator with Southern Word, a literacy nonprofit. He does not at all consider the nine years he spent cooking wasted time: “It gave me a sensory vocabulary,” he said.

His Twitter handle is still @papayathief in homage to the hours he spent scaling pawpaw trees in search of the perfect green fruit for his trademark Asian-style salad.

Basham recently came off a residency at Ucross, a working cattle ranch in northern Wyoming that doubles as “a prestigious artist residency program and creative laboratory for the arts,” according to a recent press release. He had planned to use the time to complete “Swim Home,” but by the time the residency came around last fall, the manuscript was already finished and sent off to his agent.

“So instead I went down a rabbit hole and became a physicist,” he said with a chuckle.

Basham had long been interested in the uranium legacy on the Navajo Nation, but he had never really studied it. During his residency he learned shocking details of the 1979 Church Rock uranium spill, plotted locations of the reservation’s 520 abandoned uranium mines, and delved into the chemistry of radioactivity, the life of Marie Curie and the “long, varied and bloody” history of mining companies. He thinks he already has the seeds of a second novel.

“That whole thought process could not have happened if I didn’t have a residency,” Basham said. “Residencies like Ucross are great because you’re not expected to produce anything. You get the time and space to do whatever feeds your creative process.”

While his second novel may focus on generational trauma, “Swim Home” is a more personal story of adapting to grief and loss — quite literally adaptation in the case of the protagonist, who finds himself growing gills after the death of his brother.

“I didn’t realize until after my friends read it and pointed it out to me that it’s about the loss of my little brother in 2006,” Basham said.

Basham credits his mentor at the Institute of American Indian Arts, Tommy Orange (whose own debut novel, “There There” drew critical acclaim in 2018) for giving him the direction and encouragement to write full-length fiction. “He was always asking us, ‘Why are we (Native Americans) writing? What is the point?’” Basham recalled. “For me, I’ve decided I’m trying to remind Americans we’re still here. We’re present-tense Indians. I’m battling mythologies while creating new ones.”