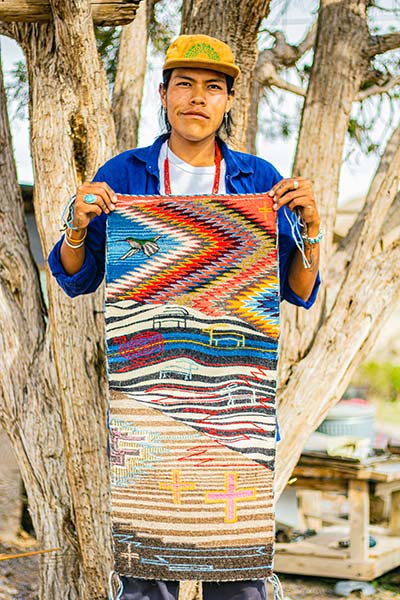 In the spring of 2020, just as COVID-19 was hitting the Navajo Nation, Teec Nos Pos master weaver, fiber artist and sheep herder Roy Kady and his grandson Tyrrell Tapaha collaborated on something very special – the first ever Churro wool and hemp blend traditional Navajo weaving titled “May beauty be restored.”

Kady said people “literally went wild” over the weaving, which immediately sold for $12,000 and yielded a commission for a second hemp-churro wool weaving.

The hemp was provided by producer Ira Vandever, owner of the Vandever Trading Company in Cubero, New Mexico.

“I’m very open to using all different kinds of fibers in a lot of my pieces,” said Kady. “We intend to continue working with this incredible fiber.”

Some of that openness comes from his travels abroad, including to India, where he learned how silk was grown and processed.

Additionally, Kady said in looking back at Diné ancestral preparation and utilization of different fibers, nettle was commonly used in weaving, which is comparable to hemp.

“I’ve worked with hemp before in its raw form and also worked with nettle and they’re very similar in the process and how it would spin up,” he said.

“Knowing that, and also some of the stories that I heard about the usage of them,” he said, “I came to the idea of utilizing hemp because of its sturdiness and strength, especially for utilitarian pieces like saddle blankets or a woven rugs that can be put on the floor.”

Then Kady met Vandever and learned that he was interested in pursuing hemp.

“That’s how the connection got made,” he said. “I asked my grandson by clan, Tyrrell Tapaha, if he would be interested in collaborating with me in weaving the first of its kind Navajo weaving made with Navajo Churro wool and hemp.”

Together, they experimented with different blends of hemp and churro wool, including 50/50 blends, two-plied yarns, and hemp or churro dominant blends.

“The whole weaving had a mixture,” said Kady. “It was experimental so we did all the different kinds of blending with it that became the woven piece.”

Kady expressed that he thinks there should be changes made to the Navajo Nation legislation that criminalized the cultivation and growth of hemp last October.

“It’s just too bad that the Navajo Nation went backwards on its legalization, because hemp would be very promising in the future economically,” he said. “Not just for the Nation, but for me as an artist. It’s a really huge mistake.”

He added that when you get to the stage where you can weave wearable fabrics with hemp, it’s very soft to the skin, even softer than silk, which is another benefit.

“This fiber is very pliable, spinnable,” he said. “It doesn’t take much to process it.”

Kady is working with a sustainable fashion designer, Angel Chang, to make a wearable piece for her collection for Paris Fashion Week in 2022.

“We’re using different fibers in the pieces that will be woven,” he said. “That will also include some of the Indigenous hemp that we have access to.”

Kady believes it’s important to get through misinformation regarding hemp to get the truth and wants to encourage other weavers to be open to using hemp fiber.

Unfortunately, the Navajo word for marijuana that means “the tobacco that makes you go crazy” has given hemp a bad name too, he said.

“That’s how it got the name and it’s just never been corrected,” he said.

He suggested since hemp does not make you high, it should have its own name reflecting that.

“Hemp is incredible,” he said. “It’s the future. It’s a great fiber and we should be allowed to grow it and not be backwards about it, and to educate our people correctly…”

Tapaha, 20, a sought-out weaver in his own right, grew up around weaving, which he started doing on his own eight years ago.

He said he appreciated the opportunity to work with hemp.

“It seems very open-ended right now,” he said. “Maybe it’s the young optimist in me, but I do have high hopes for the applications and the economy.”

Tapaha said there are very few hemp processing plants in the United States.

“For the most part, you have to ship it internationally, get it processed, and then get it shipped back,” he said.

All the more reason it would be an opportunity for the Navajo Nation to step in and start producing hemp.

“In my mind, it just seems like a perfect match,” said Tapaha. “Why don’t we create a manufacturing plant or a steppingstone at the very minimum for people’s benefit?”

Tapaha said even amongst his own peer group marijuana and hemp are seen as one thing when they are not.

“They aren’t thinking about the utilitarian applications of hemp,” said Tapaha. “It does go back to the legislation and the misinformation that continues to be perpetuated.”

However, Tapaha said that these days even just the idea of pursuing a career as a fiber artist and a weaver is overlooked, which is another hurdle he had to overcome.

“The majority of my life I just thrived and did really well in academia, but I was nineteen and 12 credit hours short of getting my B.A., I was like, there’s an empty hole in me,” said Tapaha. “There was no substance as opposed to what this profession allows me to do.”

He’s grateful today for the people who support and buy his work.

“As a young person, that excites me because I want to produce,” he said. “I want to make more.”

Tapaha said Kady has been a great person to have in his life in terms of exposure to new ideas and techniques.

“Hemp is a really different thing, especially with blending,” he said. “Weaving that piece was a really unique experience.”

Tapaha said the process was “humbling” because it was entirely reliant on his skill and ability to spin and maneuver the fiber and learn how the wool and hemp are similar or different and how to combine them.

“I’m a nerd when it comes to fibers,” said Tapaha. “That was very exciting and eye-opening. I was just blown away by how it handled and what it was able to do.”

As a sheepherder, Tapaha has already been hand-spinning and hand-dying all of his yarns for his weavings.

“Incorporating hemp that way was really different, even down to the dyeing process,” he said. “I like being able to work with fiber in that way because it is what I am building my practice on – experimentation.”

He said being open to new ideas is really important, not only for the benefit of fiber artists, but also the economy that hemp holds promise for.

“It honestly feels like we are being content with what we are being fed in terms of putting things in corners for the sake of that’s where they’ve always been,” he said. “I just want to peel all of that back and say, ‘Why is it like this, why do we have to do it this way?”

The process of questioning and learning is always part of change and development, he said.

“What I liked is how versatile the material is,” said Tapaha. “The fibers were really strong and lustrous and shiny.”

Through the process of spinning, carding, and dyeing the hemp fiber, Tapaha learned that it can be refined from its coarse original state to a fiber that is silklike.

“Having a fiber that can go to that extent is phenomenal,” he said.

While wool can be bred for different features like softness, flexibility, Tapaha said hemp can do all of that, just by the amount of processing you do on it.

“The idea that if I took a little more time to play with how the fibers interacted or even refining it more on my end with carting — it doesn’t necessarily change the fiber, but it does change the personality of it,” he said.

He said with a lot of other fibers, you are not granted that leeway.

“I think that’s something that really caught my eye in terms of working with hemp, is that the direction you want the fiber to go in is in your hands,” he said. “Most people don’t understand that that is how hemp works.”

As someone who is concerned with reducing the carbon footprint, Tapaha pointed out that hemp is also a phenomenal plant at sequestering atmospheric carbon.

He said it is also a uniquely rewarding experience to work with something that’s been sourced from the soil and the atmosphere, which is similar to the experience he gets from being a sheepherder who sources his weavings from his flock.

“To have that experience with a plant, but more specifically with a ‘super plant’ was incredible,” he said. “There are limitless applications of hemp as a fiber, hemp as an oil, and the byproducts that are affiliated with this one plant.”

Like his grandfather, Tapaha only used natural vegetal dyes that he makes to dye his yarns and said for the most part the hemp blends took the dyes really well.

“Plant and animal-based fibers behave differently in that environment,” he said. “Each dye was an entirely different learning experience, whether it was the straight hemp, straight wool or blended.”

He said once you “get on the train” of hand-producing all of your materials and dyes, it’s hard to turn back.

“This whole practice, this lifeway of being a herder, doing things from sheep to loom, it’s a reciprocation,” he said. “It’s a relationship.”

He said that’s how his ancestors looked at it and continuing the practices makes him feel connected to those who came before him and made his work possible.

Tapaha spoke to nettle, also called “Indian Hemp” because it looks like cannabis, as one of the main fibers used in Navajo weaving long before harvesting cotton or wool.

He believes that instead of speaking misinformation based on ideals that come outside of the Diné culture, fiber artists can expand upon what is already known and talked about in traditional stories.

“What I’m doing today is pretty much what our people have been doing for millennia,” said Tapaha. “Outside of being pastoralists like sheepherders, we have been fiber artists. That’s humbling to me because, despite my work being a little isolating and a little different, it is my practice and who I am as a person.”

Through his weaving, Tapaha said he’s proud to support hemp producers like Vandever and “back up the market” into the future.

“My work speaks to very many different crowds,” he said. “That is the premise of art, to speak louder than words.”