Learning the life of weaving: Program allows award-winning weavers to return to school

The Navajo Cultural Arts Program has grown in size and reputation since its inception in 2015. So much so, established and award-winning rug weavers like Zefren-M, whose given name is Ephraim Anderson, and Sue Begay, became students of the program. 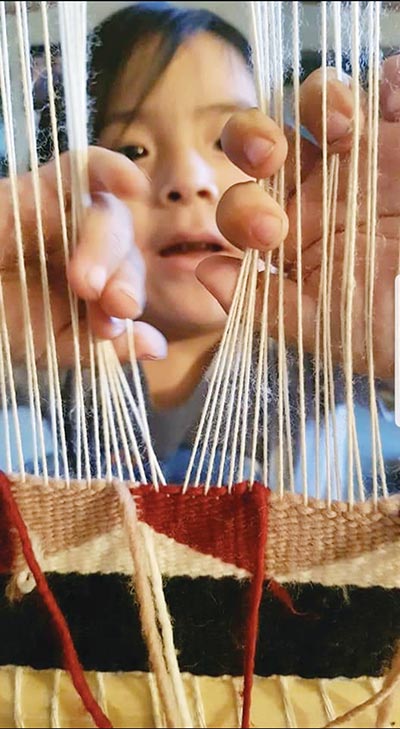 Courtesy photo | Sue V. Begay
Konner Johnny Platero, 4, who is rug weaver Sue V. Begay’s grandson, peeks through her rug in this undated photo. Begay said she got back into weaving when her grandson turned 4 years old.

Zefren, who is also an accomplished silversmith, already received tutelage in 2015 and in 2018 under renowned weaver Roy Kady from Goat Springs on the outskirts of Teec Nos Pos, Arizona.

He said the program helped him understand the gaps and inequalities he was taught, or not taught, at home where he primarily had a Christian upbringing.

He said his is a “clichéd story.”

“I’ve grown up here,” he said, referring to Shiprock, “in the valley, no water, no electricity, growing up with my grandparents. My parents were busy and were not in the picture when I was growing up.”

His upbringing was anything but ordinary. The former Navajo Prep football player said school is where he got his nickname. Now he uses it for his business name.

The mindset he was raised on was about giving back. But it wasn’t enough for him.

“My grandparents are very much Christian, Western mindset,” he said. “So I had a very interesting life being raised by grandparents that raised their children in the 1940s and 1950s, and having their mind mentality and mindset in the modern world always gave me a different reflection.”

He originally set his mind to become a mechanical engineer and was prepared to enroll at the University of New Mexico. But his father had a stroke, which changed the course of his life.

“My life plans and staying off the reservation changed to, ‘What can I do for my family, my father?’” he remembered.

He is currently a Diné College student and is working towards a bachelor’s in silversmithing. But he had to figure out how he was going to provide for his family and his father.

Zefren doesn’t go into detail about when exactly he decided weaving or silversmithing would become his life, but according to his website, his grandmothers Mary Hunt from Two Grey Hills, New Mexico, and Charlotte Anderson from Shiprock, were accomplished weavers.

It’s from them he inherited his rug-weaving tools, he wrote on his website.

He got into Kady’s weaving apprenticeship where he “wanted to learn the life of a traditional weaver,” he wrote.

He also visited museums like the Wheelwright Museum of the American Indian in Santa Fe to get more inspiration and to learn more about Navajo history.

As for silversmithing, Zefren said he learned from greats like Lyndon Sosi, Wilson Aronilth and Kenneth Begay.

Like with his weaving, he said he also incorporates historical techniques and modernizes them.

“In this case, bringing back the skill they had at heating large amounts of silver either to refine or to join,” Zefren wrote.

Currently, he is working on a bracelet for his bachelor’s in fine arts program, which he calls a triangle wire bracelet.

His professor is another renowned and legendary silversmith, Teddy Draper Jr.

“I should be finishing its final fabrication either tonight or tomorrow morning once it’s buffed,” he wrote.

Zefren said he’ll always be growing as an artist.

“Me as an artist, it’s still something that’s being created,” he said, “because through the Navajo Cultural Arts Program … it fill(s) in the missing gaps of traditional Navajo philosophy and culture.”

Sue V. Begay, who was named by a Goulding Seventh Day Adventist Hospital nurse in Goulding, Utah, when she was born 58 years ago, hails from Dennehotso, Arizona.

She got into NCAP when she saw an ad in the Navajo Times.

“I am so blessed my weaving has improved tremendously,” she said.

When she began having a family of her own, she set aside her weaving to focus on her family.

“I got back into weaving when my oldest grandchild was three years old,” Begay said.

Her approach to weaving as a young woman was to clear her mind, to pass on the teachings to her grandchildren.

These days her grandson, Konnor John Platero, helps her. He also helped her with class projects too.

“My grandchild Konner just loves it when I’m weaving,” she said. “He will bring in my loom if no rug is set up and brings me the supplies to put one up.

“He stays up with me and gets up in the morning to motivate me,” she said.

Seeing him help and sit with her brings comfort, she said.

Since reconnecting with weaving, Begay’s been remembering the quietness weaving brings. She especially missed the way the bee adzoí hits her diyogí.

When she was a NCAP student, Begay said she greatly enjoyed sharing her weaving experiences with other students.

“The Navajo Cultural Arts Program inspired me to learn more about the art of weaving,” Begay said. “The staff are very supportive and want you to succeed. After NCAP I have three classes to get my associates of art in Diné studies.”

Begay started working on getting her college degree in 1984 at Maricopa Technical College, which is now called Gateway Community College in Phoenix.

“So with that I have over 500 credit hours but no bachelor’s degree,” she said. “This is also part of my motivation.”

After she completed NCAP, Begay enrolled to get her bachelor’s with an emphasis in weaving.

“Now I am in that program,” she said. “I am learning to be an artist on canvas. So that means I have to learn the weaving and art language.”