On Saturday, at her homestead in a place called Tse Tso Si’ani, located just west of Dennehotso Market, Thora Yazzie celebrated her 100th birthday with her family.

Four generations came to celebrate – but in a responsible way with masks and hand sanitizers distributed.

Families showed up and designated their spot on a school running track in stifling temperatures that registered 108 degrees on personal cellphone weather app. 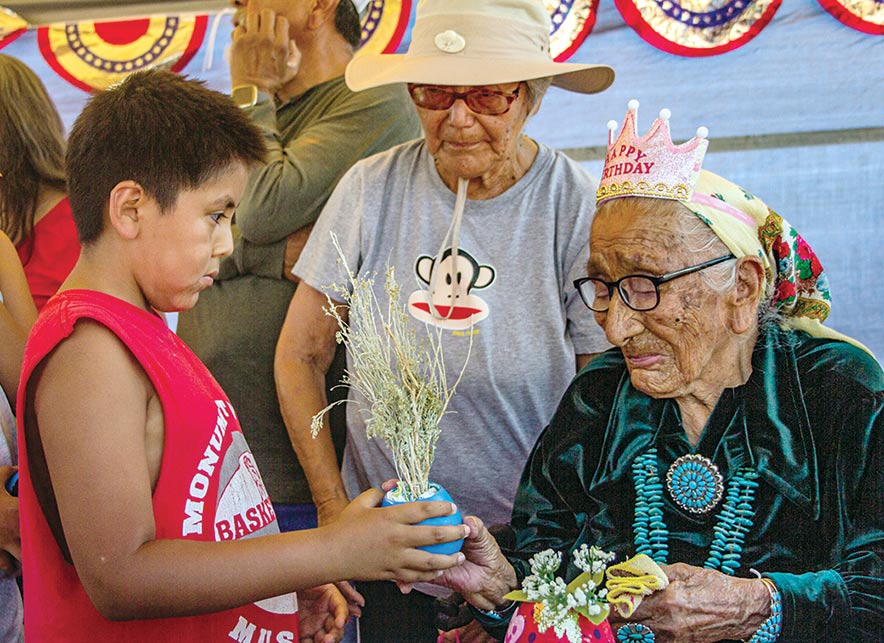 Her husband died from cancer due to working around uranium mines. They were married for 42 years.

Children who passed are Bobby Denny, Esther and Peter.

All together there are 475 grandchildren and nali’s.

Family members credit her traditional upbringing as the secret to her long life.

Service) is thin,” said daughter Dorothy. “The only records she has are for her prescription for her glasses.”

Daughters Dorothy and Bernice added that following the traditional Navajo diet and using herbal medicines and concoctions are the reasons for her longevity.

She had surgery to remove gall stones nine years ago but by the next day there was no pain and she was already home moving around doing things as normal.

“She walked out like it was nothing,” Dorothy said.

“She told us, ‘Doo inisht’ee da’ (there is nothing wrong with me),” Bernice said.

“The doctors asked her, ‘What is your secret?’” Dorothy added.

Yazzie’s parents were medicine people and herbalists who practiced ceremonies like the Blessingway, blackening and nine-day ceremonies as well as collecting herbs for remedies.
In fact, Yazzie contracted COVID-19 and survived.

“She’s a survivor,” Dorothy quipped. “She tested positive on April 7, 2020. “She got through it using herbal medicines.”

Dorothy and Bernice noted that throughout her sickness she used only herbal medicines. For all sicknesses, she resorted to herbal medicines and family members believe that medication and her faith in her traditional spirituality overcame the deadly disease.

Yazzie was not formally educated and served as a homemaker. Throughout her years she developed as an artist through moccasin making, beading and basket weaving.

For several years she served as foster grandparent through Dennehotso schools, teaching language and culture.

Bernice and Dorothy recall that early on the family had no vehicle and, withstanding weather elements, Yazzie walked from her home to and from the school with her children.
One of her passions was riding horses. According to her children Yazzie had a way with the horses.

Bernice and Dorothy described how a number of horses would embrace her touching of their faces. When a horse approached, she gently touched them and motioned with a welcoming gesture.

Part of her birthday celebration included a trail ride of riders who arrived at her home and greeted her on Saturday. The riders came out to participate in ushering in her 100th year around the sun.