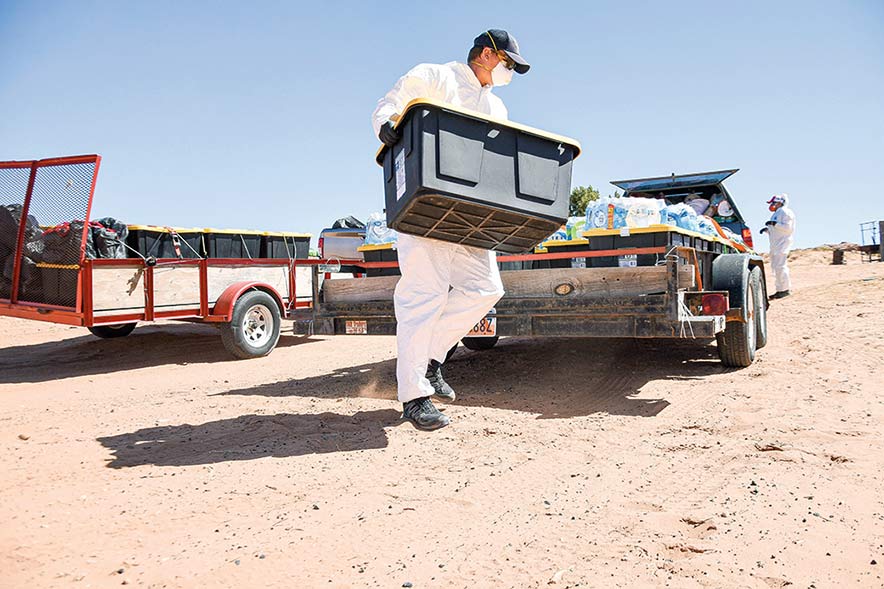 Special to the Times | Krista Allen
Nate Anderberg, a volunteer from Orem, Utah, carries a storage bin full of supplies to place outside a residence in Tonalea-Red Lake, Arizona. The volunteer, along with Curtis G. Frazier Jr., in April delivered more than 30 bins containing food, supplies, such as cleaning products, to families in Western Navajo.

Curtis Glen Frazier Jr. received a text message asking for help about 11:30 p.m. on a Saturday.

The text message from a young mother read: “Hello, if it’s possible, if me and my son can get help with a bin. We have hardly any supplies. No vehicle. I’m afraid to leave just for my son’s sake and mine. He’s autistic and I watch him alone. … So we’ve been home for 35 days now … My phone will be getting shut off tomorrow morning. We need help or at least a ride to the market. Thank you.”

Another text message from a man read: “My aunt, she’s 67. She has no water or electricity and takes care of four grandsons. They live in a brown house … She would really appreciate the help.

“I have others as well. My uncle is 77, but he has running water and electricity. My sister, she’s 55 and lives in a trailer with no water or electricity. Let me know if you need directions, I could lead you to their homes if you could help them. Thank you.

Frazier, Diné, who was born and raised in American Fork, Utah, has been receiving up to 30 text messages a day – a majority from people with stories like these – since April 20, when he posted on his Facebook wall that the coronavirus is rampant in his mom’s family in Tónehelį́į́h, where two of her uncles and an aunt passed on.

“I’m praying for the Navajo Nation right now,” Frazier wrote. “To my relatives on the (Nation), stay safe, stay home. Please reach out and let me know what I can do.”

When the virus hit the Navajo Nation in March, Frazier, a registered nurse and an operations manager at a community health center in Provo, Utah, wanted to do something and put his nursing skills to work.

“It seems like that kind of hit everybody,” he said. “I’ve had a lot of comments from people who (said), ‘Oh, I didn’t know it was so bad down there. We had no idea that 30 to 40 percent of the (Diné) don’t have running water.’ I just wanted to kind of make everybody aware and try and help as much as I can.”

Frazier then set up PayPal and Venmo fundraisers where monetary donations started coming in, which went toward purchasing food and hard-to-find items such as Clorox cleaning products, supplies and bleach.

“We got some people to go out to the Costco and the Walmart stores to hit up for the hard-to-get things,” Frazier explained. “They were willing to buy bulk. And water. On (April 22), people started showing up at my house.”

For three days, Frazier and his wife, Candee, received such a large amount of donations that he had to rent a long trailer to pack everything inside for transport. He also coordinated a number of drop-off locations because people wanted to help from across the state.

At the Cedar City location, a man and his daughter took donations for hay, livestock feed, and other items. At Enterprise, Utah, a woman took donations for firewood, food, and water, which were taken to Kaibeto last week on Wednesday.

And there is a man from Ogden who offered to pick up the firewood donations in northern Utah communities – Ogden, Layton, and the surrounding communities – to haul to Blanding, where Frazier’s parents, Curtis Glen Frazier Sr. and Teresa Jean Frazier, reside.

“I can’t believe how many people wanted to donate and help, whether it was supplies – I mean people were pulling up in their trucks and SUVs, unloading a lot of stuff and we’d just load it up in the trailer,” said the younger Frazier, who goes by “Bud.”

“And the generosity was huge,” he said. “These are people I don’t even know nor even heard of. They were just willing to help.”

A total of seven helped Bud transport donations to his parents’ homestead in Blanding, where all of the items were sanitized, separated into 48- and 27-gallon storage bins, and then sanitized again.

The Essential Oil company made 750 masks.

“I just really wanted to help,” Bud said, “and it turned into this big deal where a lot of people were donating a lot of stuff and so we’re able to help other people out.”

Some families received more than one bin, depending on family size, said Bud, who sanitized all items, including the bins, once more just before they were given to families – for extra precaution.

“Now that we have an idea of how this works and the best way to go about it, I think maybe we’ll tidy up the bins a little bit more or just get certain supplies for certain areas on the Navajo Nation, depending on what they need,” Bud said. “My family has been really supportive for sure. My parents in Blanding, my brother Tyler, a volunteer, Nate, and my brother Travis, who’s coordinating in the Shiprock area.”

Bud said he knows how hard life can be without running water and no connection to the electrical grid. And how hard it is not to be able to wash your hands or sanitize items.

“It can be a real problem, especially in the middle of a pandemic,” he said. “This COVID-19, it’s so contagious. I’ve been following the (virus cases) for the Navajo Nation. It wasn’t about money – it was about getting supplies down there.

“Both of my grandparents in Tonalea passed away, except my grandpa died in June, but his brother and sister, we were able to deliver packages to them,” he said. “But toward the end of their lives, they were struggling so hard to get water. They were old and frail.”

The distinctive smell of pork ribs wafted in the air as Bruce Greymountain grilled meat outside his home near Wildcat Peak.

Greymountain, originally from Naatsis’áán, lost his job in Las Vegas in March due to coronavirus concerns.

Now that he’s back home, he’s preparing his cornfield for this year’s growing season. He also maintains livestock and helps his wife, Janice Betoney, around the house.

Janice on March 27 lost an uncle to the virus and two weeks later, she lost an aunt, also to the virus.

“It’s kind of hard,” Greymountain said as he watched Bud and his volunteers distribute black and yellow storage bins for the seven families in the area. “But we don’t go anywhere. We just stay here. We’re trying to obey the (self-isolation and stay-at-home) order and everything.”

Janice added, “We just stay inside.”

Bruce and Janice said they needed cleaning supplies, especially hand sanitizer, which they’ve looked for on each of their supply runs to town, during which they always wear a mask and latex gloves.

Bruce and Janice installed a no-visitor sign near Navajo Route 21 to protect families in the area.

“She tries to stop every visitor that goes up there (to her mother’s place),” Bruce said about Janice.

At each residence, Bud and his volunteers suited up in DuPont Tyvek 400 protective coveralls and masks to distribute the bins. This was to protect himself, his volunteers, and the families his team visited.

“I wanted to make sure that we delivered these safely because I didn’t want to take any chances with, one, my parents being there. I didn’t want them getting out of the car.

“And, two, for other people,” he said. “We’re going from family to family. We don’t want to pick something from one family and take it to another.”

“I want my people to succeed and be strong and to endure this pandemic,” he said. “And I want to help as much as I can. So, that’s what I’m doing.

“The ability I have up here with my nursing background, as well as being able to be part of this community up here in Utah has helped with resources,” he said. “So I’m just trying to pass that along down south (Diné Bikéyah).”

Bud and the volunteers have also delivered supplies and water to Chilchinbeto and Tuba City.

He added, “I want to thank the community of Utah and the donors, they are the ones who have made this possible.”