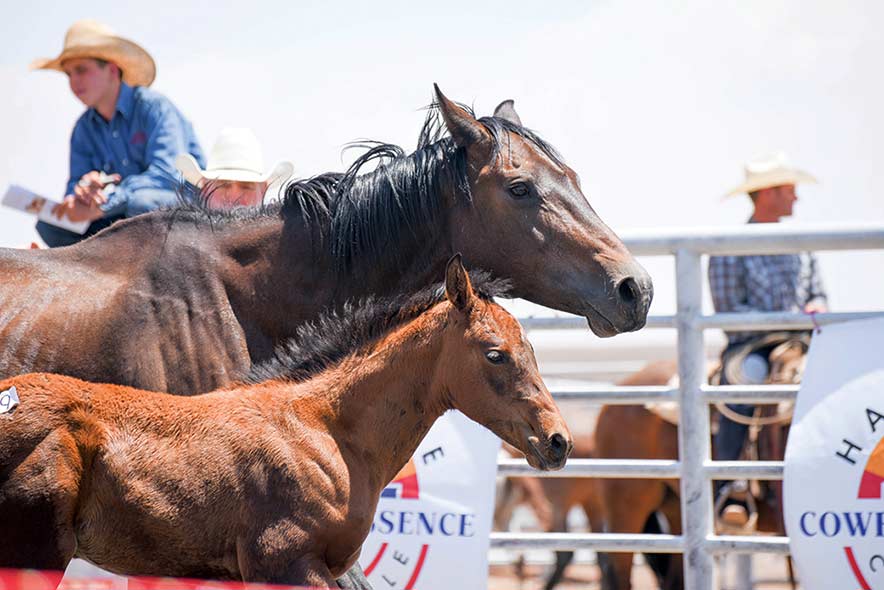 Navajo Times | Krista Allen
A foal runs alongside its mother during the 2021 Hashknife Colt Sale at Babbitt Ranches’ Spider Web Camp near Dził Łibéí on Saturday. The highest bid was on a black quarter-horse colt that was sold for more than $10,400

The bidding that hot morning was fierce. Auctioneers Ron Berndt and Reed Flake rumbled over the speaker, hands went flying up, and horses paraded out of a pen.

The buzz as the bidding ticks into the thousands can be compelling theater as people from across the country compete to buy an American Quarter Horse Association-registered colt or filly.

This annual battle of the deepest pockets happens at the Babbitt’s Spider Web Camp, north of Kinłání-Dook’o’oosłííd.

Singer ended the auction with a winning $8,700 bid.

“Just knowing what you’ve experienced and what you bought in the past,” said Singer, who owns two other Babbitt horses, both of which are registered with the AQHA. “Just looking for a great horse through the stud and the mom.”

Bidders say it’s so easy to raise a hand one more time, but a few hundred turns into thousands very quickly.

“You’ve got to be persistent,” said Bonnie Stevens, the public relations consultant for Babbitt Ranches. “It’s kind of like the real estate market. There’s going to be a price and then the market will drive it up.”

But every one of the Babbitt colts and fillies have some of the best bloodlines and can excel in their disciplines, said Clay Rodgers, who became ranch manager in March.

“I was looking for (agility) and speed,” said Singer, who owns two other Babbitt horses, both of which are registered with the AQHA. “I know it’s going to be a great horse.”

Singer, a two-time qualifier of the National High School Finals Rodeo, said she’ll use the horse to handle everyday ranch work before she trains it for roping.

The good, the bad and the ugly 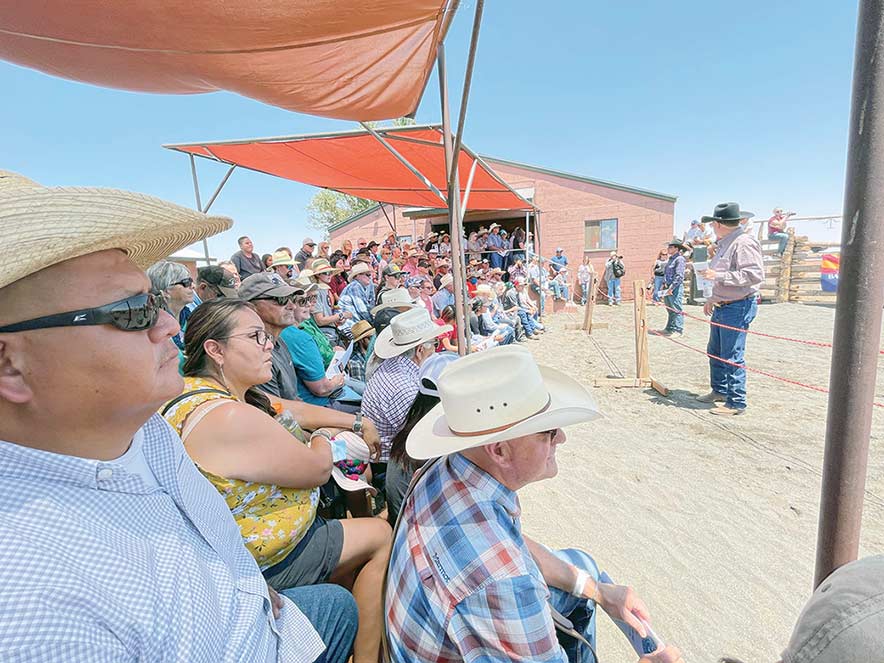 Navajo Times | Krista Allen
Spectators and bidders from across the country watch as bids increase on a quarter-horse foal during the 2021 Hashknife Colt Sale at Babbitt Ranches’ Spider Web Camp near Dził Łibéí on Saturday.

For some, a horse auction is a place for buyer and seller to meet and arrive at fair market value for an animal.

For others, it’s a place where a buyer – hoping to get the best price for a horse – doesn’t get a horse.

The Hashknife Cowboys are the product of Babbitt’s 2013 Bay stallion.

“I was looking for the bloodline,” Stoney said. “I tried but the bidding went higher and higher – beyond ten thousand.”

Stoney, a retired rodeo competitor, who resides in Glendale, Arizona, said he only went up to $4,600 each time he bid on a Hashknife colt or filly.

“They (bidders) outbid us all,” he said.

That’s when Tooh Dine’é rancher Jerry Winn of Navajo, Arizona, stepped in to help Stoney with a bay roan quarter horse at no charge.

“I went directly to (Winn) and we talked it over,” Stoney explained. “He saw me bidding over in the corner.”

Winn, who also raises quarter horses such as the Blue Valentine and the Driftwood, said he saw Stoney bidding but not winning a horse.

Stoney said he was determined to get a Babbitt horse, but it didn’t happen this year.

He said the experience reminded him of his parents selling his blue roan quarter horse 25 years ago without his knowledge. The sale, he said, hurt him deeply because he liked the blue roan.

“That’s why I want a blue roan,” Stoney said. “I watch (blue roan) videos all the time, like a little kid in a candy store trying to decide which candy to grab.”

“We’ll get you fixed up,” Winn told him.

Stevens said this is one of the reasons people go to the Babbitt colt sale, because spectators know the horses and their foals are well-taken care of and have a great history.

Rodgers said the foals will stay with the mares for another year to grow, develop foot and to learn to graze.

“We don’t feel it’s a good day to take a colt home and stick it in a stall. It never learns how to be a horse,” Rodgers added.

The Hashknife Colt Sale returned to the Spider Web Camp after a one-year hiatus because of the coronavirus pandemic.

“That’s another reason why people are so excited to be out here,” Stevens said. “Things are opening up and people are just thrilled. There are lots of open space and it feels safe.”

Billy Cordasco, the president and the general manager for Babbitt Ranches, said it’s been nearly two years since the Hashknife Colt Sale took place at the Spider Web Camp.

“I know the last couple of years we’ve been doing all kinds of praying (because of the pandemic),” Cordasco said. “There’s a lot to be thankful for and it’s always great to remind ourselves of those good times (before the pandemic). We’ve had some things that didn’t feel so good as well. I know that there have been some losses of all kinds.”

The colt sale on July 10 was a special day because the sale isn’t only about the horses, it’s also about a big family gathering, said Rodgers.

The family gathering is better known as the “Babbitt Ranches community.”

“It’s a long western tradition and everybody knows it’s the second Saturday in July,” Stevens added. “For Babbitt Ranches, it’s about being together––extending beyond Flagstaff, beyond Arizona.”

This year, the Babbitts celebrated 135 years of operating in northern Arizona. Babbitt Ranches’ property ranges from beyond Cataract Canyon near Bidáá Ha’azti’i on the west to Tółichí’íkooh on the east. 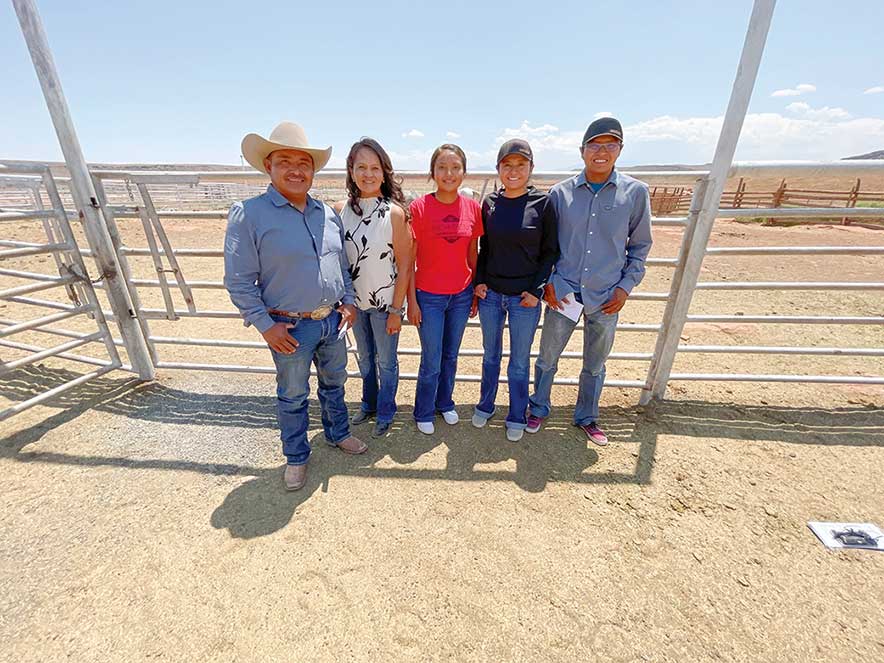 The total operation is more than 1,000 square miles. And it was once bigger.

Babbitt Ranches was established in 1886 by five Babbitt brothers from Cincinnati, Ohio. Their original plan was to establish a cattle ranch in New Mexico, but the area around Flagstaff was more to their liking.