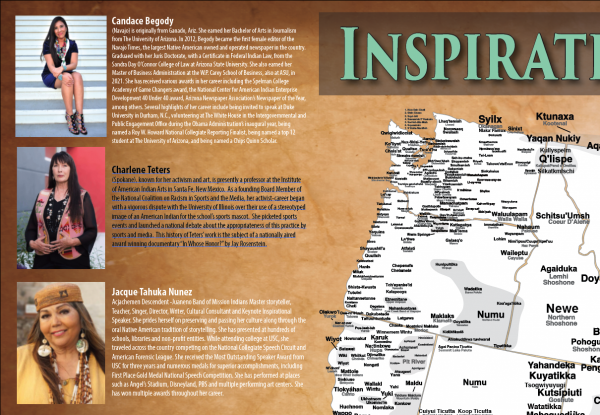 After spending the last seven years researching and producing maps of the original Native nations —first of the continental U.S., then Alaska and Hawaii, then North America, then the Caribbean and South America — Aaron Carapella was “kind of maxed out” on the cartography of the pre-colonial Americas.

But he didn’t have to look far for his next project. It came to him.

“I probably had dozens of people suggest it,” he said.

The Cherokee/Anglo cartographer’s Tribal Nations Maps had always been illustrated, but since Carapella was trying to show the pre-colonial world (and avoid copyright entanglements), he chose early illustrations of Natives from various tribes and their homes. This caused some customers to complain the maps made Natives look like they were a thing of the past. They urged Carapella to create a map with contemporary images of Natives.

“Several people specifically said it should be Native women, because they’re the ones that do a lot of the work in their communities and don’t always get recognized,” said Carapella.

He had been thinking along those lines himself as he researched tribes to create his maps.

“According to my research, 70 to 75 percent of the tribes in the Lower 48 were matriarchal societies,” he said, “yet today, maybe 25 percent of them are led by women, and it’s about the same percentage in the tribal councils.”

“You had the government and the missionaries coming in and saying, ‘We don’t want to talk to the women, where are your men?’” he said.

“We internalized that to the point that when Wilma Mankiller became chief of the Cherokee Nation, her biggest obstacle was people in her own tribe saying a woman can’t be chief. She had to say, ‘Hey, not so fast, that (way of thinking) didn’t happen until the 1700s!’”

Once Carapella decided on the theme “Inspirational Women of Native America,” the next question was whom to feature. He decided he could only do justice to 13 women in the space available on the borders of the Lower 48 map, and there were so many to choose from.

“I wanted to make sure it wasn’t just famous women, like tribal leaders or actresses,” he said. “I was looking for women who are known and respected in their communities, but not so well known in the world at large. In Indian Country, it’s not a thing to talk highly of yourself. You let your actions speak for themselves.”

From his seven years of researching tribal communities, Carapella had made a lot of contacts among the various tribes. He started putting feelers out.

“The selection process was completely organic,” he said. “Some women said, ‘I really don’t want to put my face out there, but I have a friend …’”

From the Diné Nation, Carapella chose Candace Begody. She had been editor of the Navajo Times when the first article on his maps came out in 2013, and he had been impressed with her then.

“When we reconnected, I was surprised to learn she had since gotten a law degree and an MBA,” Carapella said. “She’s the kind of person a little Native girl can look at and say, ‘I want to do that.’”

Carapella asked each woman to submit a picture of herself she found “inspirational” and a brief biography … but among such accomplished people, some of the bios weren’t so brief.

“I had to cut them down a lot, which made me nervous,” he said. “Like someone would have seven degrees, and I only had room to list three or four. I was worried they wouldn’t like it.”

But most of them, once they saw the finished product, “were really happy,” Carapella said.

Begody posted on her Facebook Page, “I am deeply humbled and honored to be featured alongside these beautiful and brilliant Native women. What a beautiful project!”

Since Carapella couldn’t afford to compensate the women for their participation, he’s using the old Native barter method and paying them in maps.

“As with anything Native, I’ve given away way more than I’ve sold,” he said with a laugh.

Carapella’s next project will be a poster that features only the women, without a map. This way he can work in more inspirational women who didn’t fit on the borders of the map.

“There’s been a movement lately to decolonize and bring back the matriarchy,” Carapella said. “Hopefully this will help.”