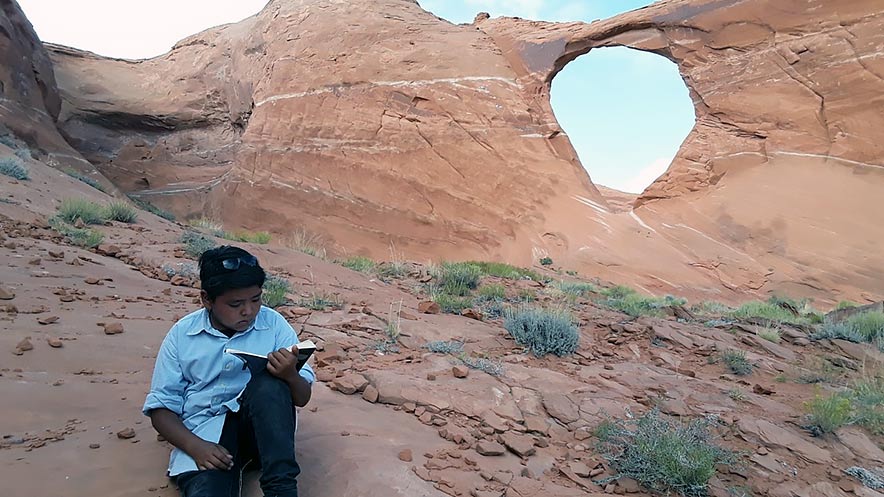 Submitted
Charmaine Tsosie’s son KJ takes time out to read during a visit to Hope Arch near Chinle. Tsosie’s children have inherited her love of reading, but she worries about other kids whose parents may not have money for books or be able to travel to the library in Flagstaff, as her family sometimes does. Her volunteer group, Chinle Planting Hope, is raising money for a bookmobile for Chinle.

Charmaine Tsosie grew up in a home without electricity or running water. But one thing they had was books.

“My parents would pick them up at flea markets, anywhere they could find them,” she said. Hank the Cow Dog, Nancy Drew, The Babysitters’ Club, the Goosebumps monsters, even Archie, Betty and Veronica were Tsosie’s childhood friends. “From a very early age, I discovered the joy of getting lost in a book,” she said.

Until she grew up and started having kids of her own, she didn’t realize how lucky she had been. With the nearest public libraries 25 miles away at Diné College or 65 miles away in Window Rock, her kids turned to their school libraries — but some of those libraries had policies against allowing children to take books home, or even allowing children to check out books beyond their grade level, which left Tsosie’s daughter, a high-level reader, bored with the selection.

“I started thinking about all the kids in Chinle, and how little access they had to reading,” said Tsosie. “I thought how great it would be if we had a library here.”

As president of the local volunteer group Chinle Planting Hope, Tsosie was in a position to do something about it, especially after the group gained national recognition thanks to an article in the New York Times about their efforts to deliver food baskets to quarantined elders. A group of retired professors and educators saw the article and offered to help CPH write a proposal for a bookmobile.

They called the effort “READ in Beauty,” where READ stands for “Read, Empower, Adventure, Dream.” In addition to making children’s lives richer, CPH hopes access to reading material will bring up local children’s reading levels, increasing their chances of getting into college and getting a good job.

According to Arizona State Educational Reports, 67% of Chinle third-graders and 89% of high schoolers lack reading proficiency. The bookmobile would circulate between remote communities in the Chinle area, bringing books and also offering a study space with charging ports for tablets and laptops, Tsosie explained.

Community members would receive library cards just like with a conventional library, and the bookmobile driver and a volunteer crew could host community events and educational games.

The main expense would be up-front — $95,000 for a 2020 Sprinter Book Hauler Cargo Van and all the accessories. An organization in Pennsylvania called Judith’s Reading Room has already offered to donate some new books. After that, the group estimates it will cost $8,000 a month to run, including salaries of an operations manager and driver.

CPH hopes to raise startup costs of $204,570 through a combination of grants and private donations, according to its proposal. It’s an ambitious project for a small group of volunteers headed by a woman who’s also a mom, a student, and has a full-time job.

But the group raised more than $60,000 for their food basket project, sextupling their goal of $10,000. And the passion is certainly there. “This is a project I feel very strongly about,” said Tsosie. “I don’t know what my childhood would have been like without books. I don’t want that for any child.”

Information: To donate, go to https://www.gofundme.com/f/chinle-quotread-in-beautyquot-bookmobile