50 Years Ago: IRS finally agrees to allow deductions for ceremonies 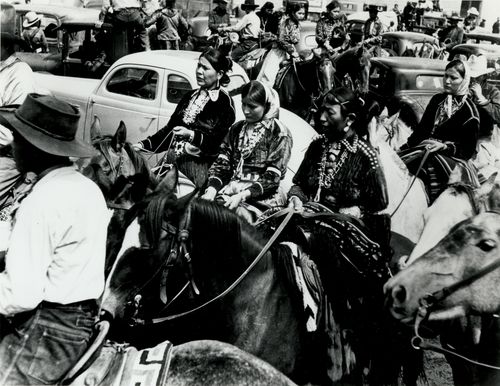 From the exhibition: Navajo women at the Gallup Ceremonial, circa 1940. Gallup, New Mexico. Photograph by Rolf Tietgens. Lot 179. (National Museum of the American Indian.)

This is tax season on the Navajo Reservation and although officials for the Internal Revenue Service report that less than five percent of Navajos file a federal income tax report, those that do will now be able to deduct expenses for Navajo ceremonies.

The report from the IRS, issued on Feb. 1, 1965 said that Navajo “sings” and certain other dances and rituals are now deductible but “they can’t be just any old Indian dance.”

The IRS has ruled that any heath-giving or illness-curing ritual “peculiar to the Navajos” is a legitimate tax deduction as a medical expense. This marks the first time that the IRS has allowed any Indian member of any tribe to deduct costs of traditional healing practices.

The ruling said that this would allow Navajos to also deduct expenses for medicine men, hand tremblers and other tribal ritual healers.

“It’s evident to anyone who has witnessed a Navajo sing,” said an AP article on the subject, “that the ceremony is anything like small or inexpensive.”

It is not uncommon, said the article, for the sing to cost $4,000 or more and this was in 1965 dollars. Besides the cost of the medicine man and the hand tremblers, Navajo families have to pay for the cost of feeding the guests for as long as nine days.

“According to Navajo custom, each guest must be fed by the ailing Navajo’s family to his satisfaction or the spells cast by the medicine man won’t work,” said the AP article.

W. P. Morse, IRS representative in Flagstaff, said the ruling “relates specially to any culturally accepted Navajo practice for the medication, cure and relief of the disease.

The Navajo Times reported that the ruling, at least in the beginning, only provided for those who paid cash, although it was common for Navajo families to pay for part of the cost of the ceremony by providing their own sheep to be butchered or giving the medicine man or hand trembler sheep or cattle in partial payment for their services.

The decision came as a result of a complaint filed before the IRS by a Navajo who lived in Wide Ruins, Ariz. who said that some families were paying as much as 25 percent of their income for various types of medical rituals.

In other news, Navajo Tribal Chairman Raymond Nakai said he has decided not to get involved in a dispute going on in Gallup over whether officials at the Gallup City jail failed to protect Navajos who were picked up on public intoxication charges.

The charges came up when two members of the tribeÊdied in the jail within a 10-day period in early February 1965.

Henry Kee, 19, of Lupton was the first death to be reported on February 1, He was found dead in his jail cell after he was brought to the jail the previous day from the Public Indian Health Service Hospital in Gallup.

No official reason was ever made public about the cause of death.

On February 10, Gallup Police Chief Manuel Gonzales reported a second death. The woman, who was at first unidentified, was later determined by her fingerprints to be Julie Jane, 38, of Rehoboth.

Gonzales said he believed that the woman had died from exposure but jailers said that when she was picked up and taken to the jail, she was “mumbling and crying” and was later found to be dead in her cell.

Gonzales said police responded to a report about 7:36 p.m. about a female lying near the roadway on the road to Rehoboth. The report said the person seemed to be intoxicated.

Gallup Police Officer Tom Rhodes reported that when he went to the area where the female was reported to be, he was met by a Navajo man who never gave him his name. The man showed Rhodes where the woman was laying and the two placed the woman in the police panel truck and she was taken to the city jail instead of to the hospital because she didn’t appear to be sick, just drunk.

An hour later, Larry Ambler, a jailer, called downstairs and reported that Jane was having problems breathing and looked to be seriously ill. Instead of calling for an ambulance, however, jailers called for the fire department and when firemen arrived, they worked on her with a resuscitator for about half an hour and then reported that she had stopped breathing.

At that point she was taken to the Public Health Service Hospital in Gallup where she was officially pronounced to be dead.

An inquest was held the next day and it was revealed that the woman was pregnant and that doctors at the Public Health Hospital had delivered a six and a half pound baby that was dead.

Gonzales said that police learned about the pregnancy shortly after she had been admitted to the jail and this was put on a supplemental report but again, no decision was made to take her to the hospital.

The autopsy revealed that Jane died of lumbar pneumonia and exposure. The weather report for the day she was found said temperatures had gotten down to about 40 degrees in the evening.

Although the police department received some criticism from area chapter officials, there were no reports that the department made any changes in its policies on how to handle people who are picked up on public intoxication charges.