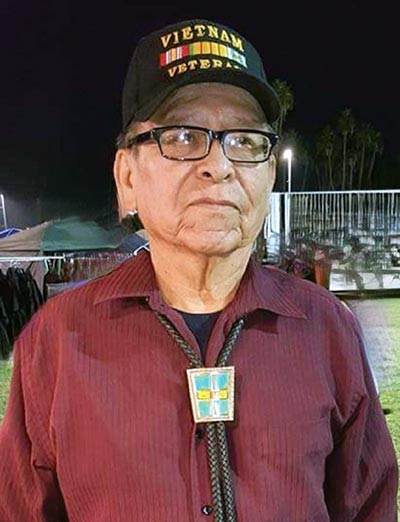 On Tuesday, Navajo Nation leaders offered condolences to the family of U.S. Army veteran and renowned Steamboat, Arizona, resident Gibson B. Jones, who passed away on Friday at the age of 76, the president’s office reports.

Jones’ military career began Feb. 10, 1968, when he began serving in the 168th Engineer Combat Unit as a classified mechanic. After four years of service, he was honorably discharged on Feb. 17, 1972, and earned a National Defense Service medal, marksman medal, and Vietnam service medal.

After his military service, Jones returned home to serve veterans through the Navajo Veterans Association in the Window Rock, Chinle and Tuba City regional offices as an advocate, before eventually moving to Phoenix where he did the same.

Jones’ is survived by his children, Gibson Jones Jr., Zachery Jones and Treina Jones and his first wife Alice Sam and second wife Lilly Nockidine.
The funeral service was scheduled Wednesday at the Jones family burial plot in Steamboat.

WINDOW ROCK – On Monday Navajo Nation health officials reported 214 new cases of COVID-19 from Aug. 6 to 8 and on Tuesday reported 206 for a total of 420 cases on the Nation.

No deaths were reported and a total of 1,866 people have died from the virus.

The Nation remains in “yellow” status and facemasks are required in public.

Based on the number of cases from July 22 to Aug. 4, the Navajo Department of Health issued a health advisory notice warning of the uncontrolled spread of COVID-19 to 69 of the 110 chapters.

The estimated $740 billion package heads next to the House, where lawmakers are poised to deliver on Biden’s priorities, a stunning turnaround of what had seemed a lost and doomed effort that suddenly roared back to political life.

“Today, Senate Democrats sided with American families over special interests,” President Joe Biden said in a statement from Rehoboth Beach, Delaware. “I ran for president promising to make government work for working families again, and that is what this bill does – period.”

Biden, who had his share of long nights during his three decades as a senator, called into the Senate cloakroom during the vote on speakerphone to personally thank the staff for their hard work.

The president urged the House to pass the bill as soon as possible. Speaker Nancy Pelosi said her chamber would “move swiftly to send this bill to the president’s desk.”
House votes are expected Friday.

WASHINGTON – Sen. Brian Schatz, D-Hawai‘i, chairman of the Senate Committee on Indian Affairs, said funding and new resources to support Native communities’ climate and energy priorities are included in the Senate-passed Inflation Reduction Act, according to a news release from his office.

State of emergency declared due to floods

WINDOW ROCK – The Navajo Nation’s Commission on Emergency Management declared a state of emergency on Aug. 1 due to flooding caused by recent monsoon rains.

The declaration allowed chapters to access additional resources to help mitigate the impacts of heavy rainfall.

The commission strongly recommended that all entities implement emergency response plans and gain access to funding. Flooding increases risks of property damage and loss of life and impacts public health and safety and damages community infrastructure.

Community Health Representatives and public health nurses under the Navajo Department of Health were on the ground in chapters supporting and helping elderly and those with health conditions. They went door-to-door checking on high-risk residents.

A flood watch was in effect for the entire Nation throughout last week.

Chapters that need help can email the Division of Community Development at MonsoonRelief@NavajoChapters.org