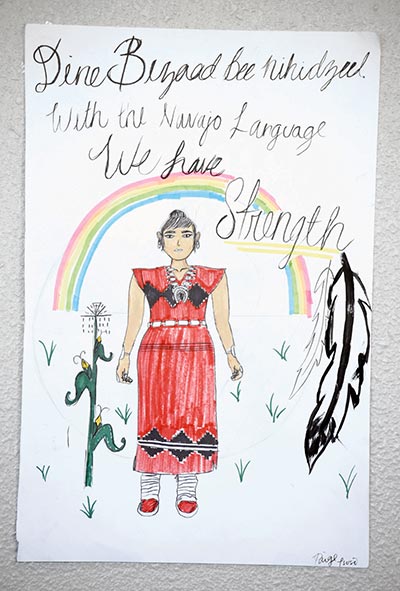 Navajo Times | Ravonelle Yazzie A poster emphasizing the Diné language is on display at the Diné Language Teachers Association Fall Conference at San Juan College in Farmington on Oct. 26.

Teachers: ‘Immersion’ for Diné not working

Language loss and revitalization aren’t new topics in Indian Country. Over the last couple of decades, the Navajo Nation has watched as other languages, like that of the Eyak, an Alaskan tribe, or the Lake Miwok, a tribe in California, became extinct or dormant.

While the Navajo language has 7,600 Navajo-only speakers and over 171,000 fluent speakers worldwide, according to “Ethonologue: Languages of the World,” it’s considered at risk.

The office is under the Department of Diné Education and works to develop Navajo language and cultural competency among Navajo students. 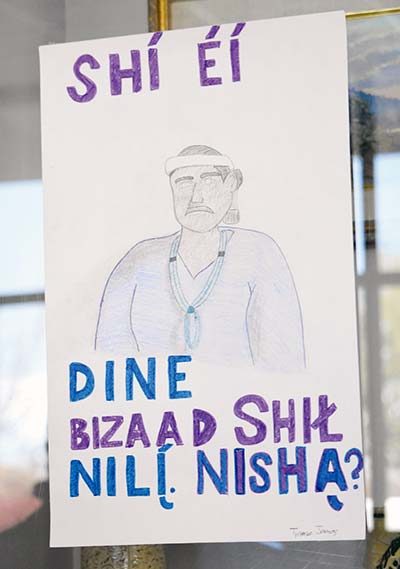 Navajo Times | Ravonelle Yazzie
A drawing made by a Navajo Prep student is posted on the wall outside of the Diné Language Teachers Association Fall Conference at San Juan College on Oct. 26.

“Based on the rate of decline, how it has been accelerating, the guess is maybe by 2020, which is in three years, when they do the Census, (Navajo language speakers) will be down to 30 percent,” Benally said.

This estimate is based on Census data that was studied by Florian Johnson, a cultural specialist at Rock Point Community School.

Another decade later, in 2010, the Navajo language showed its most stark decline to date, to 51 percent. 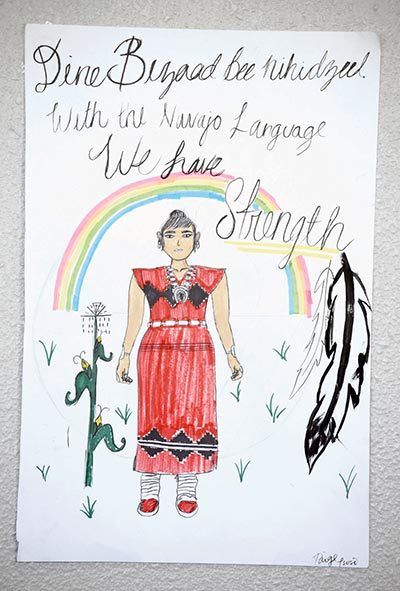 Navajo Times | Ravonelle Yazzie
A poster emphasizing the Diné language is on display at the Diné Language Teachers Association Fall Conference at San Juan College in Farmington on Oct. 26.

In the span of just 10 years the percentage of Navajo language speakers dropped 25 percent, according to Census data.

According to research by Wendy Greyeyes, an assistant professor at the University of New Mexico, the decline in Navajo speakers is more substantial for those 39 and under — meaning they are less likely to speak Navajo.

For those 40 and over the decline is considered slight.

“The younger the generations are, the less likely they are to speak Navajo,” Benally said. “By the time you get down to kindergarten there are none.”