Do not let the healthy rush of river water lull you into a state of false hope that the drought has ended.

What people are seeing is the seasonal spring snowmelt that usually fills the riverbanks of the Animas River, which begins near Silverton, Colorado, in the San Juan Mountains, says Chris Sypher, the city of Farmington’s community works director.

The seasonal runoff takes place between April and early June. Soon, the river will slow down, Sypher said.

“The reason that it looks really good right now is they had this really nice bump weather up at Silverton upstream and mountains,” Sypher said. “That really was nice, but, previous to that, we were like 35% of normal flows in the river and all winter, it was like that.

“So, this is a snow melt time so, even though, you may have what appears to be almost normal and that’s what it is right now,” he said.

While the area received snow over the winter, Sypher said the amount of snow was well below historic levels. 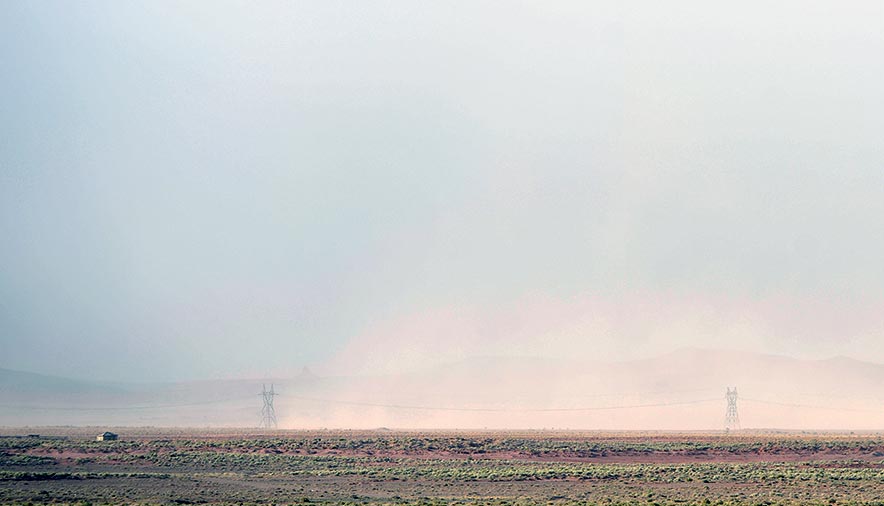 Navajo Times | Donovan Quintero
A hogan and 200-feet power lines are dwarfed by blowing dust as 70 mph winds kick in on May 22 north of Kayenta. A drought continues to grip the Navajo Nation, affecting snowmelt, snow runoff and monsoons, which ultimately affects agriculture and groundwater levels used for drinking purposes.

According to the snowpack water data, the Upper Colorado Basin Snowpack reports that the amount of snow that fell this past winter only reached a level of a little more than 19 inches, well below the historic average total precipitation of 28.1 inches.

“Not even an inch of snow is left up there to come off,” Sypher said, referring to how much snow was left on the mountain range.

Based on the data, the city enacted a stage one water shortage advisory urging water users to reduce usage by 10%. Sypher said the city has four stages, with the last stage – Stage IV – called Water Shortage Emergency.

There are no penalties associated with stage one, but if the city goes to stage two or higher, customers should expect $500 fees and water suspensions.

“We want to make a difference and prepare,” he said. “We need to start kind of changing our attitude and our habits, now. And hopefully make it through without ever going beyond stage one, and that’s our goal.”

The water increase is attributed to people watering their plants and trees, Sypher said.

He added Navajo Tribal Utility Authority, a water customer of Farmington, was sent a letter on May 27.

The letter from the city to Ray Benally, informed NTUA of the water shortage advisory that took effect on June 1. The letter stated the water levels were currently at full capacity, but continuing drought conditions caused low stream flows and historic snowpack levels, would prevent the city from replenishing water supplies.

The letter to Benally added NTUA should expect seeing a reduction if water supplies began dwindling. Sypher said NTUA uses up to six million gallons day for its customers on the reservation. 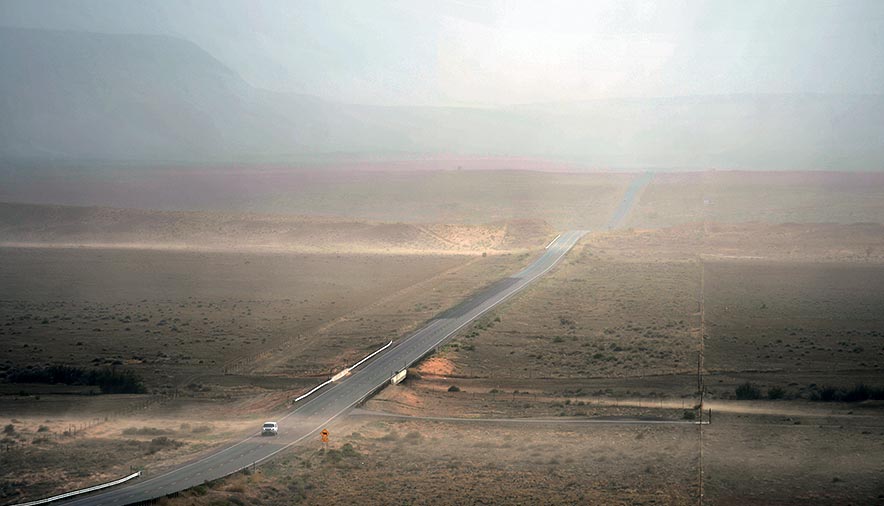 Navajo Times | Donovan Quintero
Traffic on U.S Highway 64, east of Kayenta, cautiously drive through a dust storm caused by 70 mph winds on May 22.

According to the Department of Water Resource, total consumption of drinking water is approximately 12,00 acre-feet, or more than 3.9 billion gallons, annually.

Separate from the city’s water shortage issues is the Navajo-Gallup Water Supply Project, which is expected to begin operations in 2024 or 2025.

When it begins syphoning water from Navajo Dam and the San Juan River, it is expected to draw up to 1.2 trillion gallons of water, or 37,376 acre-feet of water a year. The water project will provide water for 250,000 by 2040, according to the water technology website.

Currently, according to the U.S. Drought Monitor, the whole Navajo Nation is in an “extreme” or “exceptional” drought stage. Overall, the region has been in a state of drought for more than 20 years, which scientists call a “mega-drought.”

Eric Moore, who grew up in Farmington, was fishing on Saturday at Farmington Lake, said he has not seen the level of the lake being so high. In fact, the 25-year-old said he remembers the lake usually being 30 feet lower.

For him, however, his focus that day was on fishing and relaxing.

“I like to focus on the line and think about life,” he said. “It’s a good time to relax.”

Moore graduated from the San Juan College’s School of Energy with two degrees. Soon after getting his diplomas, he applied for a job in Taiwan and was accepted. He leaves in August.

“One day I was fishing out here and I had my two rods,” he said. “They were both going off at the same time. I could not even concentrate on one pull.
“Fishing is fun,” he said. I’ve been doing it since I was a kid.”

Sypher said the city will be in a water shortage advisory “until further notice.”