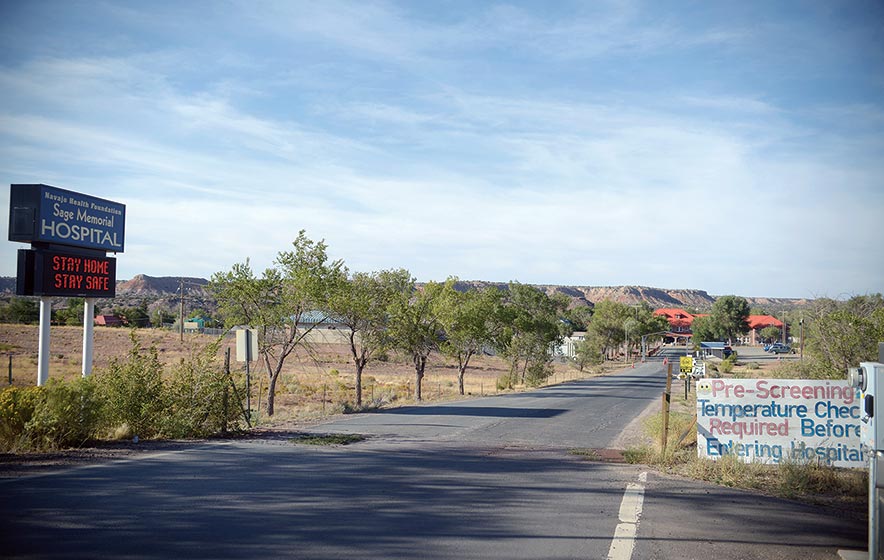 Navajo Times | Donovan Quintero
Sage Memorial Hospital in Ganado is no longer functioning as an Indian Health Service provider since President Jonathan Nez vetoed a resolution renewing its contract with the tribe.

As of last Wednesday, Sage Memorial Hospital is no longer operating as an Indian Health Service provider.

President Jonathan Nez vetoed an emergency resolution from the Navajo Nation Council to renew the hospital’s contract with the tribe for the next 20 years, citing “questionable spending practices, lack of due diligence and other important concerns.” Nez also said in a press release he felt the resolution was rushed through “without consideration and support from the appropriate standing committees.”

“This is a 20-year contract extension for a health care facility that is currently under a financial audit due to allegations related to questionable spending, unaccounted funds, the diversion of federal funds for questionable purposes, and other issues stemming from the tenure of the previous CEO,” Nez is quoted as saying in the release. “This matter must be fully vetted because we are entrusting this entity with the health and well-being of our Navajo people,” he said.

Sage CEO Christi El-Meligi countered with a written statement saying the hospital’s board and management has “worked extremely hard” to correct financial irregularities that occurred under its previous management company, Razaghi Healthcare, from which it separated two years ago and sued for $30 million in 2019.

“Sage Memorial Hospital demonstrates accountability annually through audits, reporting to the Nation’s Health, Education and Human Services Committee, federal Indian Health Service (IHS), and all federal and state reporting agencies both financially and clinically (regarding quality of care),” El-Meligi wrote in response to questions from the Navajo Times.

She said the only reason the legislation appeared to be rushed through was because the hospital had been interrupted by the coronavirus in its attempt to get supporting resolutions from all eight chapters it serves.

Once the Navajo Nation government reopened in August, El-Meligi said, Sage was able to get all its documentation and submit it to the Council before its previous contract expired at the end of September. Without its tribal contract, El-Meligi explained, Sage will be unable to obtain its usual funding from the IHS and plans for the new 120,000-square-foot hospital and clinic it was slated to start building this month are on hold.

“The funds Sage currently has in its savings is to be used to build the new hospital. If it has no IHS funding and is forced to use these funds to run its operations. This funding will last three years at most,” El-Meligi said.

Nez pointed out in his release that Sage was recently awarded a $200 million settlement from the IHS and has access to other funding sources, such as third-party billing and carryover funds, to continue providing health care services.

“Had the sponsor (of the legislation) taken the time to involve everyone, the Council members may have learned the situation is not as dire as presented,” Nez said. “Sage Memorial Hospital would not ‘go out of business’ tomorrow or would not disappear forever.”

El-Meligi said Sage will continue to work with Council to iron out the concerns, but in the meantime the situation has created “a tremendous amount of confusion” for its patients.

“The most unfair part of this process has been the unfairness and hardship it has put on the more than 20,000 Navajo people in the Ganado service area who receive health-care services and who will now be forced to travel for an hour to obtain their health care,” El-Meligi wrote. “In an emergency situation this could be the difference between life and death,” she said.

“Also, Sage employs over 250 Navajo people who depend on Sage to provide for their families.”

The IHS put out its own press release on the matter, advising patients in the Ganado Service Area to go other IHS facilities for care.

The Chinle Service Unit will be the referring agency if a patient needs to be referred for specialty care. Those with private insurance may continue to receive their health care at Sage.