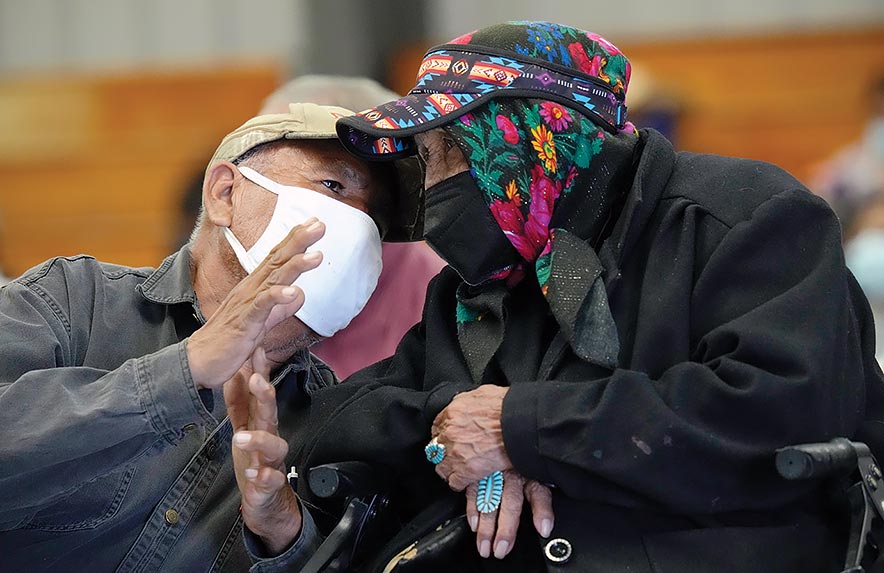 Navajo Times | Donovan Quintero
Jerry Martinez, left, translates in Navajo what is being said in English to his mother Emma Martinez, 97, on April 28, during a meeting about the 10-mile buffer zone proposal that was held at the Nageezi Community Center in Nageezi, N.M.

Stories of being forced out of the Chaco Culture National Historical Park were compared to a proposed 10-mile buffer zone that would halt new oil and gas development for 20 years.

Last Thursday, 153 Navajo allottees, including resident Grace Begay, gave a testimonial to officials from the Bureau of Land Management and the Bureau of Indian Affairs about why they opposed the proposition.

A retired physician’s assistant, Begay told officials she was born two miles from the park in a hogan. She grew up herding sheep in the area before park officials forced her family off the land.

“You got to understand how much it hurts me,” Begay said. “It hurt me when they destroyed the hogan I was born in.

“Please listen to us,” she said. “Please, I beg the U.S. government not to do anything with the land or buffer zone.”

In November, the Biden administration announced at a White House Tribal Nations Summit that Interior would take steps to protect the Chaco Culture National Historical Park and its landscape. Interior Secretary Deb Haaland visited the site a few weeks later.

Two months later, the Interior filed a notice with the Federal Register to withdraw land around the national park. The intent was to create a 10-mile buffer zone around the park and bar new federal oil and gas leasing.

Interior would evaluate how it would manage existing development and ultimately stimulate the area’s economic future.

Congress established a one-year pause on new federal oil and gas leasing within a 10-mile radius of the park. At the same time, the Navajo Nation conducted a study to identify cultural properties important to the Navajo people.

On Thursday, a newsletter to residents stated that the 20-year withdrawal of federal land would not impact existing leases held by Navajo allottees and other mineral owners. The newsletter added the proposed buffer zone would not become the park’s new boundary.

Ervin Chavez, who opposes the land withdrawal, said he hopes the comments would not reach Haaland because she would be biased when considering the Navajo allottees’ concerns.

“Whether she’s going to consider it in agreeing with it or against it – come on. It’s a given that she’s going to approve it,” he said. “She needs to get out of this and let somebody else who’s more neutral take another look at it.”

Chavez fears the land freeze proposal would most likely be approved. He said it would impact allottees, not privately held lands, if it is.

BLM and BIA officials at the meeting explained to the allottees the proposal that, if approved, would mean no new exploration and no leasing of oil, gas, and coal for 20 years.

However, it also would not impact Navajo allottees, which meant they could continue lease their minerals for development.

While it might seem allottees would not be affected, Chavez said trucking the extracted minerals out of the area would be where struggling families would take the biggest hit.

Nageezi and other Navajo communities intertwine with a maze of 23 different land statuses, including private, BLM, Navajo tribal land, and Navajo allotment lands.

Chavez said allottees live within this complex maze, commonly called “checkerboard.” If approved, it would become impossible to transport the minerals across the different boundaries that make up the checkerboard area.

Her son Jerry Martinez said the 10-mile land freeze would not impact her but said she was raised in the Chaco Canyon area.

“She tells us that she used to herd sheep around that area,” Emma’s son explained. “Even then, people were coming around and looting the area. They used to ride horses in there and haul away all those antiques.”

The two sat near one of the chapter’s large community building entrances, and Emma’s son occasionally leaned over and gave her updates.

While residents and a few tribal officials spoke in Navajo, the BLM and BIA officials did not.

Jerry said his mother was against the proposed freeze. He added that the oil companies did not clean up the areas they fractured.

According to the Independent Petroleum Association of America, it is a mining process that injects water and chemicals at high pressure deep underground. It creates minor fractures in the bedrock to release the trapped oil and gas.

“The landscape, they don’t fix it,” Jerry said.

The pair left as Delegate Daniel Tso told Navajo allottees why he was not supporting them.

Chavez said Emma Martinez asked why she had to consult with the Pueblos about her electrical lines at a chapter meeting.

“I think her concern is all kinds of limitations are put on lands that belong to her,” he said.

Chavez is also a San Juan County Commission District 2 candidate. He said his opponents do not recognize the county is composes of only 6% private land, and most of it is the Navajo Reservation and Navajo allotments.

“They don’t realize that any type of drilling that happens on allotment also includes BLM and state lands,” Chavez said. “And the county and the state, they get revenues from that. So, they benefit from that. Revenues do come back through the state and then back to the county.”

Chavez explained Four Corners Power Plant, a coal-powered plant situated on the reservation, was one of the biggest taxpayers to the county.

“My argument to them used to be, ‘Hey, Navajos are paying their dues to the county and to the state,’” Chavez said, referring to his first term as county commissioner.

“We used to be the number one taxpayer to the state when it came to the revenues,” he said.

San Juan Generating Station, located north of Four Corners slated for closure sometime this year, is the other plant the county profited from in tax revenue, added Chavez.

Torreon Chapter Vice President Mario Atencio, a legislative aide to Tso and an activist who opposes oil and gas fracking, said it was not easy to speak against families who depend on the royalties they receive from mining companies.

“It’s hard to talk against that, but you can’t drink the oil,” Atencio said. “Water is way more important than all this.”

Atencio compared oil and gas fracking, which he believes endangers the aquifers his community uses, to the declining water levels occurring at Lake Powell and how it impacts LeChee, Arizona.

“There is the (Navajo-Gallup Water Supply) river water project, but then you’re seeing if the river dries up,” Atencio said. “You’re seeing that in LeChee. They’re not priority water users. So, now they can’t get the water. Is that going to happen over here?”

The 280-mile Navajo-Gallup Water Supply Project that is supposed to provide water to 43 Navajo chapters, the Jicarilla Apache Tribe, and Gallup, hit a snag and delayed its scheduled 2024 opening because of upgrades. It will be underway by 2029.

“Because we don’t know, we have to protect every single water resource out there,” Atencio said.

Atencio said creating a buffer zone could preserve the land for future developments that didn’t involve extracting oil and gas. It could also make way for developing businesses that cater to tourism and smart manufacturing using 3D technology from a home business.

With broadband technology like Starlink becoming more readily available, a Navajo wanting to start a business from home is possible.

“A person could easily design all this stuff and FedEx it out,” he said.

Right now, local community members who have a smart manufacturing business must drive to the nearest border town if they don’t have fast broadband connectivity.

“So, that’s what needs to happen in places like here,” he said. “Working from home is now a big thing. We’re trying to get those types of businesses here.”

Atencio’s hometown, Torreon, is prime land where businesses could easily thrive. It was a simple matter of cutting through the red tape and being very patient with a tribal process that could take years to trudge through.

“The whole argument here is that there is sacred land here. ‘These are sacred lands; we cannot have any type of drilling near these sacred lands. All of this is sacred, so we can’t touch it; we can’t disturb it.’ That’s what is being said, right?” Jones asked.

Jones told the officials some Navajo people grew up with Navajo traditional beliefs.

“Some of us, we still pray with Navajo ceremonies,” he said.

Jones said the Mormon temple and the Muslim shrine, the Great Mosque of Mecca, saying their holy sites were off-limits to tourists.

“If this was a sacred site, then why do you have 50,000 people visiting these sacred sites?” he asked. “The same applies to Chaco Canyon. You have ‘ana’i over there pitching up tents.”

Harold Sam Sr., from Nageezi, walked up to the podium. He told officials he didn’t know of any other national monuments in the country having a buffer zone.

“None. So, why is it us, in Chaco Canyon, that are fighting this? Why us and our land?” he asked. “When BLM withdraws, that’s gonna hurt us for 20 years. Who here is going to still be here?”

Pauline Atencio, no relation to Mario Atencio, said she was born in Chaco Canyon.

She began telling officials she was against the proposal because she did not know what it meant in the long run and how her grandfather told her how “Wááshindoon” forced them to move.

“They were told, ‘Get out of here,’” Atencio said in Navajo. “My grandfather told us, they said to their family, ‘Take your belongings, take your sheep and goats.’ That’s what he told us.

“Today, the only evidence that shows we lived there is a bread oven and stones on the ground from our old home,” she said.

After many Navajo families were forced off the park, the government put a fence up and padlocked it, said Atencio.

“They told us, ‘If you want to get on your land, you have to get the key at the park office,’” she said for the record. “And they wouldn’t allow us to go by ourselves. ‘You will be escorted by a park ranger while you are on your own land,’ they told us.

“The shock from their words hurt me. I asked them why is a ranger going to be following me around on my own land? This is not their land,” she said. “They told us we were not allowed to touch anything, not even a leaf or a stone. I said to them, ‘I am going to pick up and take with me whatever I want from my land and take it home with me.’”

Atencio said she fears if the buffer zone is created, it will create possibilities that don’t exist now.

“No buffer zone, dooleeł,” she said.

And if Haaland approves the proposal, a Public Land Order will be issued.