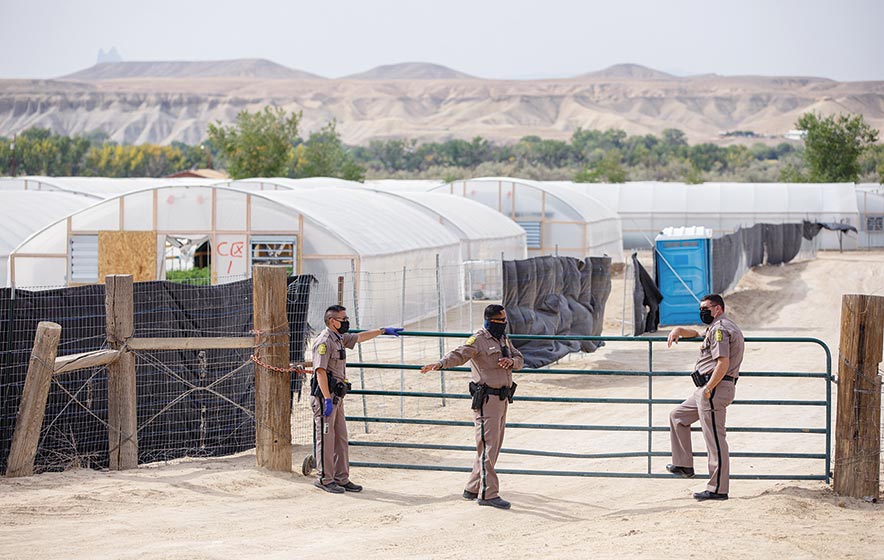 Navajo Times | Sharon Chischilly
Navajo Nation Police stand outside one of Dineh Benally's hemp farms on Tuesday. The police were implementing a restraining order against the farms.

Last Friday, the Shiprock District Court ordered a preliminary injunction and temporary restraining order against Benally and his two companies, Navajo Gold and Native American Agricultural, and shut down production.

But James said Tuesday it’s still going, although with a skeleton crew rather than the hundreds of farm workers she has seen. As James speaks, water gushes out from a valve placed on her farm. The water flows into a ditch, and then into Benally’s hemp hoop houses, evidence that not everything is completely shut down.

“This is the end of the flush valve,” explained James of the gushing water. “When we started planting, our water access was good. We didn’t have disputes with neighbors but when he came he (Benally) took it upon himself to turn on (the valve).” A six-foot-long key turns the valve on and off. Throughout the summer James has turned it off in the morning because it takes water from her crops, but it’s promptly turned back on.

This type of activity is what the Navajo Nation Police are documenting during “Operation Greener Pastures,” with one of the objectives to obtain intelligence on the hemp farms. Chief of Police Phillip Francisco explained this operation is significant and uses extra manpower — 21 officers from multiple departments. Over the weekend the officers were ordered to shut the farms down and to make sure workers comply. A mass exodus of non-Navajo farm workers could be seen leaving farms on foot or by car.

“We go out and try to contact the foreman of the farm, make sure they understand they aren’t supposed to be farming, serve them with certain papers if they haven’t been served,” explained Francisco. “Then we tell them they need to cease operations and leave.” Only during the day do these confrontations occur. At night officers monitor and document complaints about the farms.

As officers talk with James, a white vehicle pulls up, and two women get out and speak to Francisco. They identify themselves as one of Benally’s security guards and a site foreman. They take pictures of what is happening and they ask about the drone flying overhead. A skeleton crew of security guards continues to watch over the hemp — over 400 acres according to the BIA. The injunction doesn’t allow the police to destroy property or take any plants.

“They said they are doing all they can to make sure everything is in compliance,” said Francisco of the two women. “I told them about the concern of the water, and they said they think it’s someone else who are turning it on.”

Francisco testified during the Sept 17 and 18 court hearing in which the Judge Genevieve Woody decided to grant the Navajo Nation the preliminary injunction and temporary restraining order. During his testimony and cross examination by attorney David Jordan, Francisco called the situation a “crisis.”

“The nature of the crisis is there has been discord, unrest from our citizens about the growing of this hemp,” said Francisco, “to the point to where there is conflict on a daily basis between not only our citizens, but Dineh Benally’s security and his people who are working for him. “His operation is causing unprecedented response by our police department,” he said, “taking away from our ability to serve our other citizens for everyday emergencies.”

Melon farmer Herman Keifert has been protesting the hemp production and after the restraining order came out, he thought the farms would all be shut down instantaneously.

Originally from Washington, he’s lived on the Navajo Nation for over 30 years with his wife, and they have grown their melon crops in Hogback. He said the hemp operations continue even more so at night, especially at other San Juan River Farm Board members’ homes in Hogback.

He said people are still afraid of the violent repercussions that could happen if they speak up. He himself has had to deal with false information accusing him of killing hemp workers, which was posted on social media and that he chuckles at. “When the first (farm) by the highway went up months ago is when we should’ve stopped it,” said Keifert. “Benally just took over. NTUA needs to shut off their water and power so the plants will die. They wait until it gets dark and then they fire up the lights.

“If they get away with this next harvest they can sneak away with a lot of money,” he said. “They’ve already been getting it out by semi-trucks.” Francisco is well aware the workers trying to sneak back into the farms at night to continue to work or take hemp, and is working to stop it.

While visiting farms last weekend, Francisco noted that for the most part people are complying, but they had to make one arrest of a non-Navajo who refused to shut down. Although they couldn’t hold the person in Navajo jail, they took down his information. Francisco described one farm housing about 100 workers.

“We ask the community to be patient because it’s such a large operation,” said Francisco. “These workers that are visitors who came here because they thought it was a legitimate way to make money are now being displaced. “We want to be humane to people,” he said, “and make sure we aren’t just leaving them on the street. Although the community feels they are invaders onto the Navajo Nation, we still have a duty that they’re safe and their welfare is taken care of.”

A couple of weeks ago, Oliver Whaley, Navajo Environmental Protection Agency director, and his crew were in the middle of an inspection at one of the farms when they were chased off. Whaley’s testimony was cited as one of the requirements for the judge to issue the preliminary injunction. Last week he also served Benally with a cease-and-desist and compliance order. “The compliance order is to allow us to finish our environmental inspections and requiring that Mr. Benally and all farm workers be present to answer questions and provide information,” said Whaley.

“If Mr. Benally doesn’t comply with either order, we would continue to move forward with the process of getting Navajo Nation search warrants, as well as working with our federal partners at USEPA to do the same under federal authority. Which processes we have already begun.”

The inspection has to be conducted at each farm in order to determine the extent of any violations and how to address them. This could include removing infrastructure, improper disposal of waste or use of controlled chemicals. Benally could possibly face monetary, criminal and civil penalties, said Whaley. “What can’t happen is that everybody walks away leaving a mess,” said Whaley. “And if they do, people need to be held accountable to the extent the law allows.

“This whole ordeal seemed avoidable,” he said. “At NNEPA, we’re not in the business of deciding what people can grow or not grow. That is up to our Navajo Nation lawmakers with violations of Navajo law being enforced by the Navajo Nation Department of Justice.”

Next the courts have to decide whether this injunction will be made permanent. The Navajo Times reached out again to Benally and Jordan, who have not responded to prior emails, and received an email from Jordan stating all questions will be referred to Tom Garrity, president of The Garrity Group Public Relations.

“The attorneys for Mr. Dineh Benally disagree and are disappointed with the court’s decision,” stated Garrity. “Mr. Dineh Benally and the legal team are concerned about the chilling effect this initial ruling will have on Navajo businesses, economic development and creating the opportunity in the form of jobs and community investment from the private sector.

“Attorneys plan to pursue all legal channels for their client and the benefits it will provide to the Navajo people, its farmers and small businesses located on this sacred land,” Garrity said. “Mr. Dineh Benally says that his civil rights have been violated and that this court action is putting many Navajos out of work.”