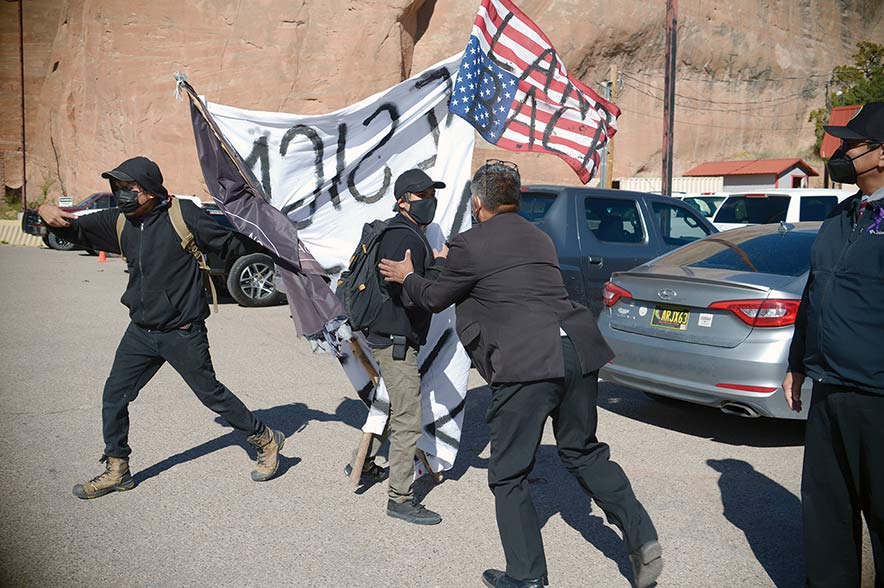 Curley and his brother, Kory Curley, both of Fort Defiance, were carrying a sign with “Resign Nez Lizer” written on it, began walking ahead of Nez and taunting him. As they were walking, the president approached them and offered to shake their hands, but both rejected his hand and said he would get away using expletive language as they walked backward away from Nez.

Merwin Joe, an executive security for Nez, watched as the men continued speaking to one another. Kyle and Kory continued using expletive language when Nez, who seemed to continue walking back to his office, turned, and approached Kyle and Kory.

Kyle said he and his brother were at the Council Chamber practicing their “freedom of speech on public property” and protesting the Nez-Lizer administration when the alleged incident took place.

“As we were walking towards the president’s office, the officers told us as long as we didn’t get in his way,” Kyle said, “so we were off to the side, well off to the side, and were saying things that we don’t agree with.”

Kyle said they participated in the domestic violence awareness march to protest the administration for integrating their religious beliefs with politics and not obeying their own COVID-19 public health policies.

“And I don’t know … if it ticked him off, but he got to a point where he got really upset, and he lunged forward, and he tried to grab me, or he grabbed my sweater,” Kyle said, “but he tried to grab like my neck.”

Photos taken by the Navajo Times do not depict Nez grabbing Kyle but show them being about a foot apart. 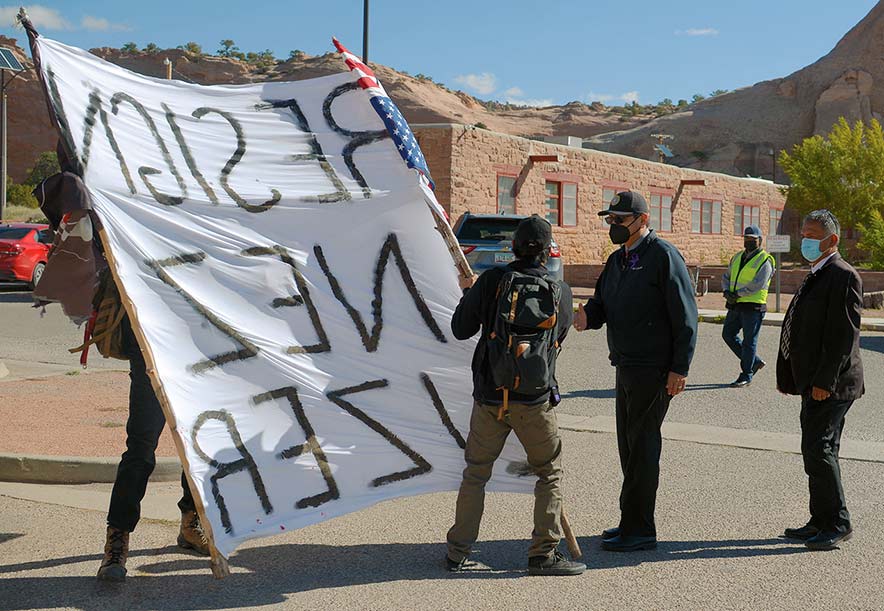 Holly James, who participated in the walk, said she saw Nez walking toward the brothers as they told Nez to stay away from them.

“Nez was walking by; there was two young gentlemen carrying a sign, which they were both on the parade route, both Nez and these two gentlemen,” James said. “The two boys were listening to speakers, and then Mr. Nez had passed by and (they) had said some words to him to start the conversation.”

James said she did not hear what was said, but she quickly realized there “was some tension.”

“Mr. Nez, I saw him extending a hand to shake the young boy’s hand, and the boys were, (but) prior to that, the boys were asking Mr. Nez to stay away from them,” James said. “Mr. Nez kept approaching, and the boys kept backing away and loudly and clearly stating, ‘Get away, get away from us.’”

“I did see Mr. Nez and the boy physically touch each other,” James said. “I don’t know who first.

“There was that big flag that was in the way at that point,” she said. “But I did see them physically touch each other. And then that’s when the security guard had come over.

“The security guard was with the young boy, and Mr. Nez backed off and continued to walk again,” she added.

Kyle said he went to the Window Rock Police District and filed a police report against Nez. Kyle said by text he reported Nez for allegedly physically assaulting him. He added he was given a police log number and would not get the report until two days from Monday.

After the alleged incident occurred, Council Delegate Eugenia Charles-Newton posted on her social media page that first lady Phefelia Herbert-Nez approached her as she was walking into the Council Chamber.

“The first lady came running up to me, and she was like, ‘This is all you guy’s fault. You guys entice this type of violence on my husband, shame on you,’” Charles-Newton said on Monday.

“The president’s security guard threatened them with being arrested and told them if they didn’t leave, they would be arrested,” Charles-Newton said. “I did make a speech saying perhaps that’s what we need to do to get the police to come out, to address our issues, to make a sign like that and put it out and get the police to respond.

“But I’m not sure exactly what happened again,” she said.

The Navajo Times repeatedly made attempts by text and email to the president’s spokesman, Jared Touchin, requesting a response to the alleged incident and to Kyle’s assault claims, but he never responded.

No arrests or injuries were reported.