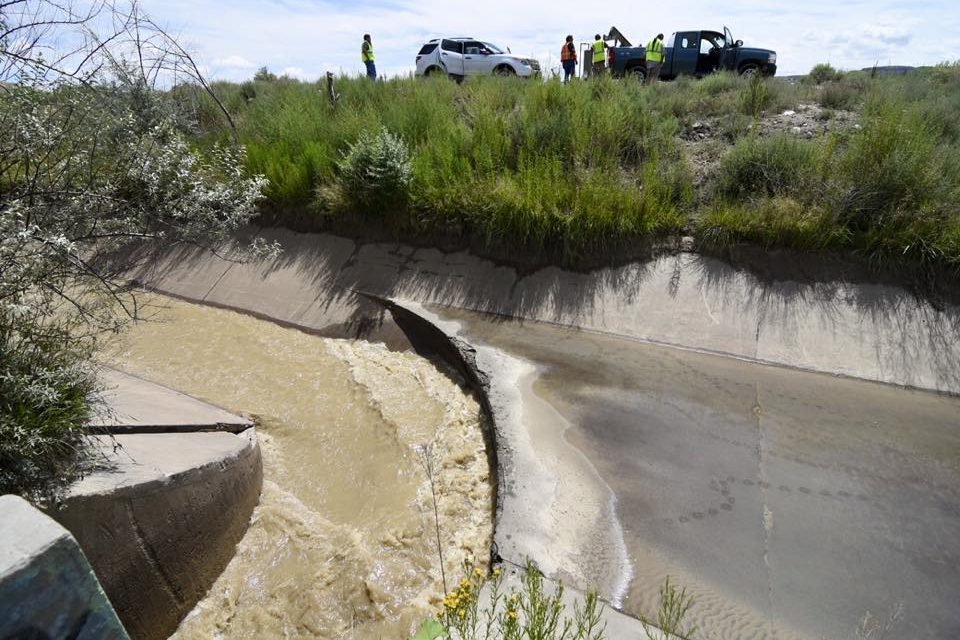 Navajo Nation volunteers with the Authorized Local Emergency Response Team, or A.L.E.R.T., inspect the Upper Fruitland irrigation that has been diverted back into the San Juan River on Aug. 8 in Upper Fruitland, N.M. Since the river was contaminated, tribal officials have turned off the irrigation in an effort to prevent potentially contaminating it. Begaye has decided to not turn reopen the irrigation for farmers and ranchers. ( Times photo - Donovan Quintero) 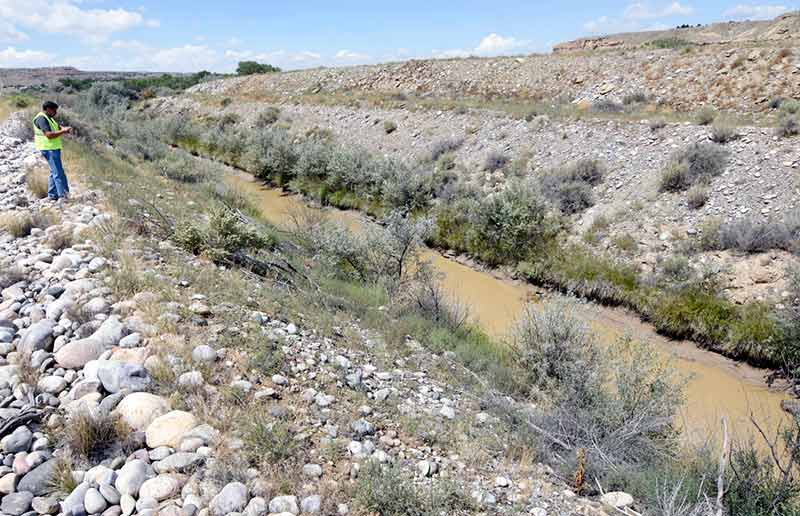 John Kinlichee, a volunteer with the Authorized Local Emergency Response Team, monitors water in a canal diverted from the San Juan River in Upper Fruitland, N.M. After being closed for over three weeks, the canal will be re-opened for farmers and ranchers to use for their crops and livestock. (Times file photo – Donovan Quintero)

Water is flowing again in the canal system that serves three chapters on the south side of the San Juan River, tribal officials confirmed Friday morning.

President Russell Begaye gave the green light while meeting with farmers from San Juan, Nenahnezad and Upper Fruitland chapters Thursday evening after the Dist. 13 Council, which includes those three chapters plus T’iis Tsoh Sikaad, passed a resolution asking for the water to be turned on. The Navajo Nation Council’s Resource and Development Committee passed a similar resolution Thursday.

Navajo farmers irrigating from the San Juan River have been without water for their crops since Aug. 7, when the canals were closed to await the passage of a toxic plume of mine waste the U.S. Environmental Protection Agency accidentally released into the Animas River upstream.

Although the NNEPA gave the all-clear for irrigation at a meeting in Shiprock last Thursday, Shiprock farmers urged Begaye to keep the canals closed because they still feared the water was contaminated.

On the south side of the river, however, farmers were anxious to save their crops and have been urging the president to open the canals.

At this Thursday’s meeting in Nenahnezad, “I didn’t hear anybody saying they didn’t want the water,” said Marlin Saggboy, supervisor of the Shiprock Irrigation Office.

He emphasized that farmers who still fear the water don’t have to use it; they can simply leave their irrigation gates closed.

Saggboy said NNEPA officials have also given the green light to water larger livestock such as horses and cows. The river water is not recommended for sheep and goats, however.

Saggboy said he is flushing the system “as fast as we can” and hopes to have water available for the farmers by Sunday afternoon.

“The president said to flush it out, just as a precaution,” he said. “We actually started doing it before the meeting Thursday, just in case it was a positive outcome.”

“They (farmers) are all excited,” he said.

Speaker LoRenzo Bates (San Juan/Tiis Tsoh Sikaad/Newcomb/Tse Daa Kaan/Nenahnezad/Upper Fruitland), who has a farm in Upper Fruitland, issued the following statement: “Today’s release of irrigation water to the Fruitland Canal system is a very positive turning point for the impacted communities. This is the outcome of a united effort of the local community members and the various chapter officials to bring relief and restore hope for our Navajo people.”

Bates also thanked the RDC members for meeting with the farmers Tuesday and passing a resolution in support of them.
Contrary to media reports, Raymond said quite a few of the crops can be saved, thanks to rain the area has been receiving during the canal closure.

To celebrate the return of the water and assure the public their crops are safe to eat, the farmers in the area will host a harvest festival Sept. 18-19 at the Nenahnezad Chapter compound, Raymond said.

“We’ll have a farmers’ market, music, arts and crafts, a free lunch … Our crops are safe to eat and delicious, so come and help us celebrate saving the harvest,” he invited.

Water is still off in the canal system that serves Shiprock, Tse Daa Kaan and Gadi Ahi, as well as downstream in Utah, where some communities use the San Juan as their drinking water source.