Located in the Navajo Department of Transportation building, once the office is staffed, it will serve as a hub for public information and promote transparency, said Platero.

At this time, he is the only employee but hopes to hire about 18 to 19 staff. 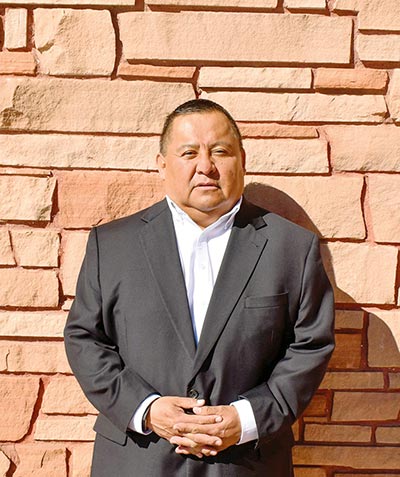 “It’s a big space that needs people,” he said. “We’re starting with an office of one and trying to create a whole system.”

Platero said he’s up for the challenge, however.

“It’s kind of exciting,” he said. “It’s a great opportunity for the Nation and I’m just very fortunate to be part of the process.”

Platero formerly headed the Division of General Services and the Office of Legislative Services (2012-20) and is recognized for his organizational skills.

In the meantime, employees from other areas, including the president’s office, which oversees the FRF office, and the divisions of Economic Development and General Services are helping, he said.

Platero explained that in order to hire employees for the newly created positions, FRF budgets had to be finalized and established through the Office of Management and Budget.

“We have to get the budgets posted first so that HRS (Human Resources System) can be updated so that they can start filling in positions that will go into those accounts,” he said. “We have to follow the process.”

Funding for the FRF office will come from the over $200 million (10% of the total Navajo ARPA funds) that was allocated to the president’s and speaker’s offices for management and administration.

“So far, accounts are set up for the FRF office and broadband office,” he said. “We’re trying to set up budgets for all of the programs.”

Platero said once the FRF jobs are defined and budgeted they will be advertised on the Division of Personnel Management’s website and on the FRF website.

However, any lateral transfers from other internal departments don’t have to be advertised, he added.

Platero indicated he is trying to recruit and hire at least three support staff “sooner than later” to help launch the office, including administrative support staff, a public information officer and a proposal writer.

“There’s other pots of money out there that we’re hopeful that we’ll be able to get additional funding to support projects,” he said.

Platero confirmed no new ARPA bills were finalized yet but, when they are, will be posted to the FRF website as well.

He said he’s aware the executive and legislative branches are working together to finalize proposed legislations that include expenditure plans.

So far, only two ARPA bills have been signed into law, (CJY-41-21) and the Budget and Finance Committees ARPA “Application, Procedures, Forms and Expenditure Plan Template” (BFS-31-21).
Platero said once he has staff on board, they will post all proposed ARPA projects that have been reviewed and approved by the Department of Justice on the website.

“If you read the attachments to the Budget and Finance resolution, that will explain the (application) process for each one of them,” he said. “DOJ has to review projects and determine that they are ARPA eligible.”

No ARPA funds are allocated until after Council appropriates through legislation and President Jonathan Nez signs it into law, said Platero.

Platero did clarify that he is not the one who is deciding which projects are going to be eligible for ARPA funds or not.

“All of that is being handled through legal,” he said. “I’m also not the one advising which projects should be recommended. My role is to go by the plan of operation that was set up by the president’s office.”

The FRF office will be divided into three sections: administrative support, accounting, and monitoring/evaluation, said Platero.

However, Platero wants people to know that while there have been many good proposals for ARPA funding, they need to realize that eligibility requirements must be met and those determinations are made by the Department of Justice.

“Certain things just can’t get funded,” he said. “There’s restrictions on what these funds can be used for.”

According to the U.S. Treasury, ARPA funds are intended to respond to the COVID-19 public health emergency and its negative economic impacts, including assistance to households, small businesses, nonprofits, and aid to impacted industries such as tourism and hospitality.

Platero said once ARPA projects are approved in legislation, any requests for proposal(s) will be posted on the FRF office website as well as the controller’s office’s website.

He would also like to see all ARPA project contracts that are awarded posted publicly.

“Resolution CJY-41-21 actually gives that directive specifically to the Office of the Controller that all contracts have to be posted on their website,” he said. “I think we can do a much better job than we’ve done in the past. It should be more public.”

“We need to be more transparent than the last process,” he said.