There are many reasons why Farmington is one of the top-ranked teams in 5A football.

On Friday, Miyamura experienced those reasons as the Scorpions made quick work of the Patriots at Hutchinson Stadium. 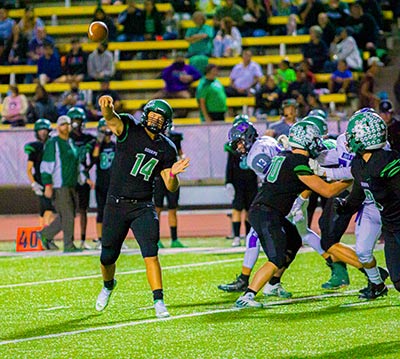 “It all comes down to execution,” Farmington coach Jeff Dalton said, following his team’s 56-0 win.

“When we focus on the small details,” he said, “we play really good football and tonight it showed.”

With a stingy defense and an explosive offense, the Scorpions ran its unbeaten record to 8-0 overall heading into this week’s bye week.

After coming out of the bye, the Scorpions will host Capital on Oct. 22 and in the regular season finale they will be the visiting team against city rival Piedra Vista on Oct. 29 at the 5,300-seat stadium.

“We got hard working guys on both sides of the ball,” Farmington wide receiver Patrick Shay said when asked about the team’s dynamics. “We all work together and if we stick it all out to the end of the year I think you can definitely see us in the state championship game.”

And while those are lofty goals, the Scorpions have shown that they are the team to beat. In fact, they have beaten all of their opponents in just about every way, whether it be defense, offense or special teams.

“I feel that this team is mature and hungry but we still got to find out how we can carry this thing through the playoffs,” he said.

During the season, Farmington has picked up some quality wins. In its season opener two months ago, they defeated Roswell 42-6 on the road. And last month, the Scorps rallied from a three-point halftime deficit to post a 38-17 win over Durango, the defending Colorado 3A state champ.

“Durango and Roswell both tested us early and they tested our maturity and that is what high school football comes down to, so that you can grow up,” Dalton said. “We definitely showed some resiliency in those games, and we were able to come out on top because of that.”

Those signature wins have put the state on notice, as the Scorps will be seeking the school’s third state crown with the last one coming in 2013.

“We’re feeling some pressure,” Farmington quarterback Brandon Furbee said. “We all want to win state but I think the pressure is on the whole team to not fall apart by the end of the year.”

“I just transferred here and the guys that I play with are just amazing people,” he said. “I have a lot of athletes out there, who make the game easier. They get out and I just try to give them the ball to go make a play.”

The Farmington coach said having Furbee on the team has been a true blessing.

“Brandon’s shown great leadership and he’s really made good decisions in the last few weeks,” Dalton said. “He’s shown a lot of growth in this system.

“And that’s exactly what we need,” he said. “We need a guy that runs our plays the way we need them run and makes the correct reads and he’s been doing his job.

“The line in front of him has been doing a phenomenal job of giving him the time he needs to get good reads and to make things happen,” he said. “He’s doing his job very well but it takes 11 guys on the field and we’re going with that.”

Dalton said his club has been very effective at spreading the field with their air-raid offense.

In six of the eight games played, Furbee has completed 72 of 109 passes for 1,028 yards. He’s thrown to nine different players headed by the 20 receptions from Shay.

“One of the goals is to spread the ball around and make the defense cover the entire field horizontal and vertical,” Dalton said. “Our receivers do a good job of that. They’re fast and athletic, but at the same time if they’re not doing their job the right way, athleticism can only take you so far.”

Dalton said his receivers have worked really hard to learn how to get to the right spots so they can get better leverage. He’s seeing that from his running backs as well.

“They’re all athletic but the more they can focus on the little details, I think that’s what is going to take them to the next level,” he said. “It all comes down to our focus.

“We all feel like if we can control what we can and execute what we’re suppose to then the rest will take care of itself,” he said.

As for the defense, Dalton said that unit has been doing a phenomenal job all season long. In fact, they have only given up 36 points this season as Farmington has posted five shutouts.

“It took the offense a while to catch up, but I feel like we’re starting to fire on all cylinders,” he said. “We’ve got to keep them mature during this bye week coming up so that we’re ready to go for our last two district games.”