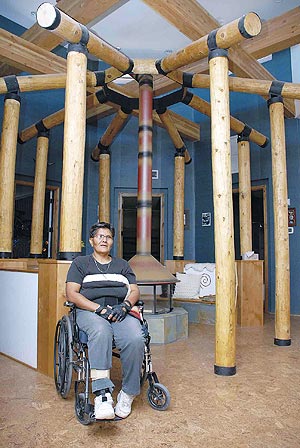 Georgia Yazzie sits next to fireplace in the center of her family's hogan-style home built by the Extreme Makeover crew.


A recent morning found Georgia Yazzie relaxing in her sunny living room, listening to the soothing strains of Carlos Nakai on the stereo.

It was a far cry from Oct. 28 when a houseful of relatives had gathered to join the Yazzie family as they watched themselves on TV, reliving the experience of having a new house built for them by the television show "Extreme Makeover: Home Edition." "It was pretty emotional, to feel all those feelings again," Yazzie said.

Subtle daylight filtered in through the skylights in the ceiling, lighting up the custom furniture, central fireplace and raw pine ceiling beams of Yazzie's new hogan-style house.

"Sometimes I just go from room to room and sit, just enjoying it," said Yazzie, who suffered head and spinal injuries in an automobile accident last year and is presently using a wheelchair, though her goal is to walk by Christmas.

But just because we caught Yazzie in a rare idle moment, don't assume that's how her life has been lately. The completely accessible home has allowed her to care for her family again.

"I can cook, I can wash dishes, I can be a mom again," she said with a grin. She can also bathe herself, something that was difficult in the family's dilapidated trailer with no running water. The new home features her own fully accessible bathroom and shower.

Unlike the trailer, the new house sports a bedroom each for Yazzie, her daughter Gwen (who used to share a room with her mom) and son Garrett, who is currently attending St. Mary's Preparatory School in Orchard Lake, Mich.

A smaller, attached hogan is home to Yazzie's grown daughter Geralene, her partner MacKenzieWillie and their two children, MacQuincy and Kenneth Willie.

Garrett's room sports a BMX theme, with parts from 30 bicycles (some of them are whole and rideable, and he took two with him to Michigan).

Garrett also has a "mad scientist room" with a computer, telescope, microscope and a bunch of strange-looking instrumentation Georgia has no idea about. Garrett's old school, Pinon Junior High, got a load of similar equipment the students are now enjoying.

There were initially problems with the home's solar and wind power system, but those have been worked out and Yazzie says her electric bills have been small to nonexistent.

The system is connected to the Navajo Tribal Utility Authority grid, which will absorb any extra energy the system produces, but Daniel Wauneka, NTUA manager for the Chinle area, said Tuesday that hasn't happened yet.

"Usually they've used a little more NTUA power than they've produced," he said. "Sometimes they've zeroed out at the end of the month. We haven't really seen an input of power back into the system, although it's designed to do that if it produces enough power." Wauneka said the grid-connected system is the first of its kind on Navajo, and the utility doesn't have a mechanism to buy power the Yazzies put back into the grid - the company would get it for free.

"So it would be a good thing, from our perspective," he said. "And from theirs - they wouldn't have to pay a bill." NTUA does rent solar power systems to homeowners in remote areas for whom connecting to the grid is so cost-prohibitive it's not an option, Wauneka said. Look for a story on that option in next week's Navajo Times. The Yazzies are currently negotiating an agreement with Diné College and the solar companies that designed their system to make the house a training ground for engineering students interested in solar applications.

"That way it helps the community and it also helps me maintain the system," Yazzie explained.

Perhaps the best thing about the house is how it has affected 12-year- old Gwen, who suffers from asthma. It came with a state-of-the-art filtration system that is helping her breathe easier, and the Makeover designers used only non-toxic building materials like cork floors.

"The only trips to the hospital we've made for Gwen have been to pick up medicine," Yazzie declared. "She hasn't had a single major attack since we moved in." Lovely as her new home is, Yazzie does occasionally miss the 30-year- old mobile home that was destroyed to make way for the beautiful new double hogan.

"Not only did I raise my children there, I grew up there," she said, tearing up a little. "There were a lot of memories there. Good and bad, but mostly good." The new flat-screen TV (complete with a selection of videos) gets a lot of use, but the brand-new dishwasher sits idle most of the time.

"I've never had a dishwasher before," Yazzie admits with a smile. "I kind of enjoy doing my dishes by hand." The thing that started all this - the solar space and water heater that captured Garrett a berth in the Discovery Channel Young Scientist Challenge and caught the attention of three separate viewers who recommended him to ABC for a home makeover - is no longer necessary, what with the huge tracking solar panels set up outside.

But it's the first thing you see when you walk into the home. The Makeover designers spruced it up and hung it in a place of honor like a treasured piece of art.

"There it is, Garrett's project," Georgia beamed. "None of this would have happened if not for that." The Yazzies have yet to meet the three people who wrote to Extreme Makeover on their behalf - a woman in Salt Lake City, a man in Ausin, Texas, and a man in San Diego - but that may be in the cards soon.

"The people at ABC have said they want to get us all together," Yazzie said.

And in case you missed Garrett's letter in the Oct. 25 Navajo Times, Georgia has something she wants to say.

"Thank you, thank you, thank you to all the people and all the companies who came from all over to build us this house. It's so beautiful. We love it." If you want to see the house, please don't knock on Yazzie's door - she's getting a little tired of giving tours. She says ABC has promised to help the family host an open house some time soon. Watch these pages for more information.

Watch the latest videos on YouTube.com

Send a letter to the editor ...