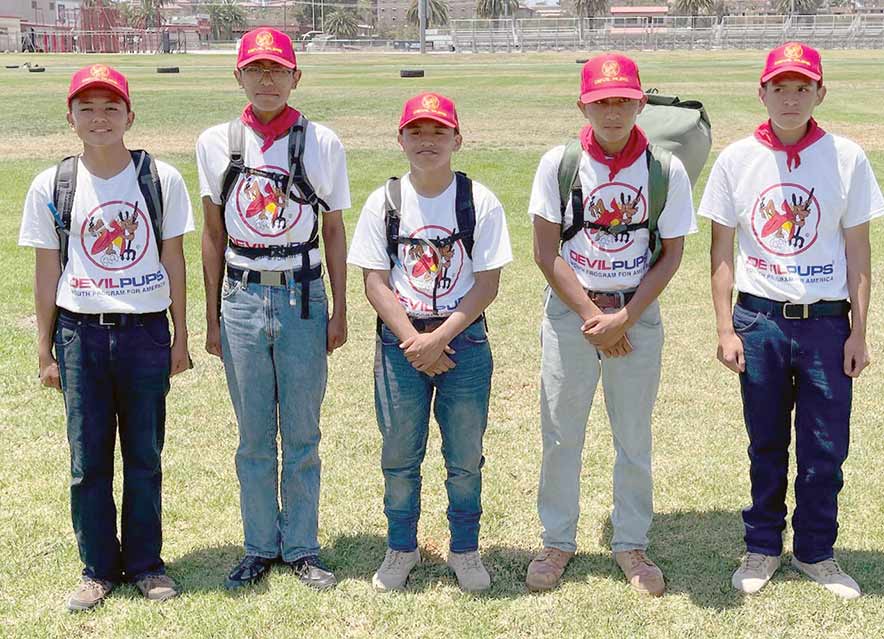 This past summer, five young men traveled to the Camp Pendleton training grounds of the U.S. Marine Corps. This is the same training facility at which the Navajo Code Talkers trained.

The five took part in the Devil Pups Youth Program – the first time any participants were sent in the nearly two years since the start of the COVID-19 pandemic.

After six days of physical, mental and spiritual training, the five Diné graduated from the camp, earned Devil Pup coins and are stronger and more confident than when they started. 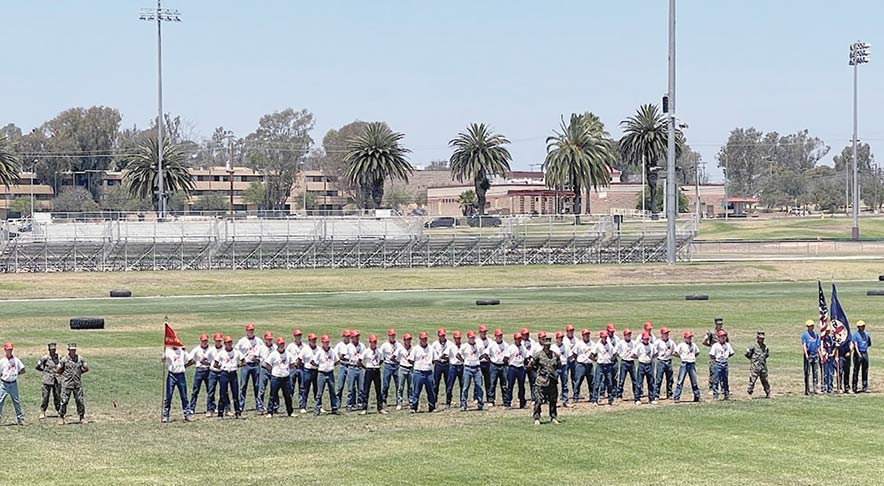 The Devil Pups began in 1954 as a camp for youth in nearby areas before expanding to include teenagers, both boys and girls, from across the country.

The program’s goal is to teach citizenship to teenage youth through outdoor physical exercise, inspirational classroom lectures and demonstrations of Marine Corps operations.

The Office of Diné Youth became involved with the program in the 80s under the supervision of Alvin Gee from the Chinle office.

Gee retired in 2021 and since then Recreational Coordinator Audrey Beyal has coordinated recruitment of Devil Pup volunteers from the Navajo Nation.

“I believe the Devil Pup Program is important because participants learn and gain self-confidence, self-discipline, responsibility, loyalty, respect, and life skills,” Beyal said, “all in which the participants can apply to their academics, sports, and their daily lives as they grow into adulthood.

“Through these moral and ethical teachings that the participants gain through the Devil Pups Program, these youth can do great things for themselves,” she said.

This year the five participants included four from the ODY-Fort Defiance Agency and one from the ODY-Chinle Agency.

The teens passed a rigorous test of push-ups, crunches, chin-ups and running in order to qualify for the program, which took place from July 16 to July 23. 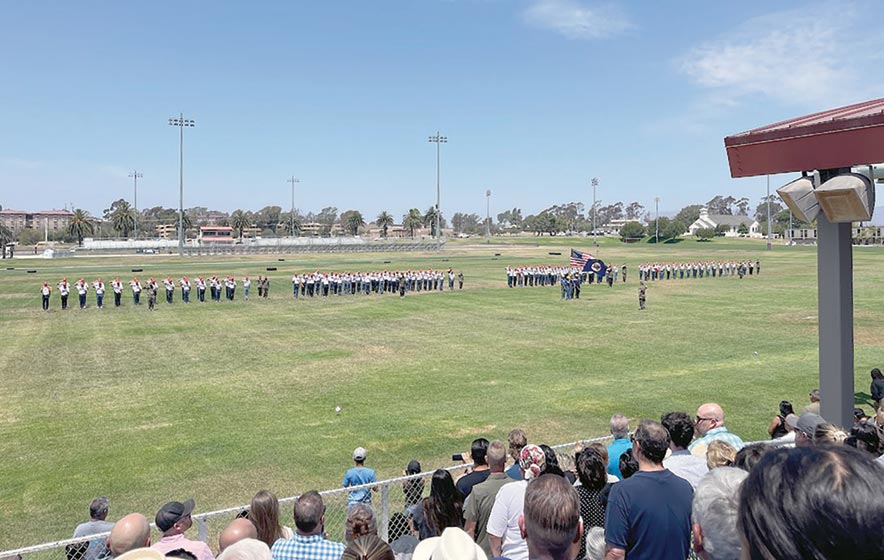 Courtesy Photo
After a week of physical exercises, hiking, marching, and classroom lectures, five young Din√© graduate from the Devil Pups Program, taught by the U.S Marine Corps. After three years of the COVID-19 pandemic, the Navajo Nation is represented again in the program.

He attends Dził Di’tloii School of Empowerment, Action, and Perseverance after transferring from Window Rock High.

Hunter was inspired to try out for the Devil Pups by his family’s military legacy, his nalii man Stanley Ben served in the Vietnam war and his grandfather was a code talker.

It took him three tries to qualify for the Devil Pups and this year he succeeded.

“When I was taken to Oceanside, California, at Camp Pendleton, I learned that I regretted it like everyone else there,” Hunter said.

“Then I first met my instructors and thinking why I even came,” he said. “I thought I was the weak one there, but I managed to handle the yelling because I get yelled at a lot at home.

“Not because they are mean but it teaches me that they cared for me so I took it as that every time I was yelled at by one of my three instructors,” he said.

One of the instructors called him “Little Code Talker,” which Hunter enjoyed.

It was tough, but Hunter said he learned a lot.

One of the most challenging activities was jumping off a tower from a height of 25 feet into water.

He was tempted to quit, but he didn’t want to let his family down.

In the end, he was proud to make it through the week and recommends the program to others.

“My favorite quote of the whole Devil Pups was ‘pain brings discipline,’” he said, “but in my platoon it was ‘we are as sharp as marbles’ because we were the strongest but not the smartest.”

“My first experience for Devil Pups was pretty cool actually,” he said, “because it was actually my first time far from home and close to the ocean where I first got to see what the outside world looked like since some of us never got to travel outside of Gallup. So this was my experience when we traveled to San Diego and to Camp Pendleton.”

He learned how to push himself to become a better person and to help others, while getting a glimpse of life within the Marine Corps.

If anyone is thinking of joining the program, he recommends they have a strong heart and mind.

Logan Terry, 14, from St. Michaels, was nervous leaving the rez but happy he did.

“The exam was harder than I expected, but when I passed, I was excited as I could go to San Diego,” Terry said.

“Before I knew it, we were packing up to head to Camp Pendleton,” he said. “When I got to the van to leave, the weirdest feeling came over me as I was happy and sad that I was leaving.”

At Camp Pendleton, he was able to keep pace with his peers, but his greatest hurdle was the pool dive. Despite being afraid of heights, he pushed through it and eventually made it to graduation.

He thanks the Marine Corps and the Office of Diné Youth for giving him the chance to participate in the program.

“During graduation I was so happy I wanted to cry,” Terry said. “I learned a lot while I was there, but most important was self-discipline and this advice has helped me with school and everyday life. And self-discipline means to overcome your weakness and control your feelings.”

He is an active youth who enjoys rock climbing, hiking and mixed-martial arts.

He believes these activities helped him pass the qualifications for the program, which he enjoyed because of the challenge.

“When entering the base, I was a little bit nervous,” he said, “but I remembered my great-grandpa, Harrison Benally Sr., and Jimmy Benally served as Navajo Code Talkers.

“The camp was fun,” he said. “Seeing people get yelled at was funny because they did not have stuff ready, like stamped envelopes and addresses.

“I liked joking around with other Devil Pups and building friendships,” he said. “I liked the pool day exercise because we practiced stepping off diving boards and falling in.”

While there he learned to march in different formations and the Devil Pup oath, But he also learned the importance of fitness and some lessons in leadership.

He hopes to join the military someday like his grandfathers.

“After hiking up Old Smokey Hill and receiving my Devil Pups coin, I felt my great-grandpas were proud of me,” Willeto said.

“All those hard days was worth it once I received my coin,” he said. “Being one of the only Natives there, I felt like I was representing something.

A quote that motivated him to continue the camp was, “The only easy day was yesterday.”

“I would do Devil Pups again if I had the chance,” he said. “I will encourage my brother to try out for Devil Pups when he turns 14.”

Shaundale Nelson, 15, is from Chinle.

“The experience was exciting, fearsome, thrilling, even depressing at some times,” Nelson said, “and most of all exhausting.”

Alongside his squad, they woke at 5 a.m. to march, hike up steep terrain and jump from the 25-foot-tall towers and into a deep pool of water.

Nelson enjoyed the challenge and felt that the program has taught him lessons he could use in life.

Beyal thanks her fellow coordinator from the Chinle office, Delta Higdon, who helped with recruitment this year.

Higdon shares the same sentiment that the program is helpful and beneficial to the local youth.

Beyal also gives special thanks to Alvin Gee whose years of work, commitment and guidance continued the Office of Diné Youth’s partnership with the Devil Pups Program.