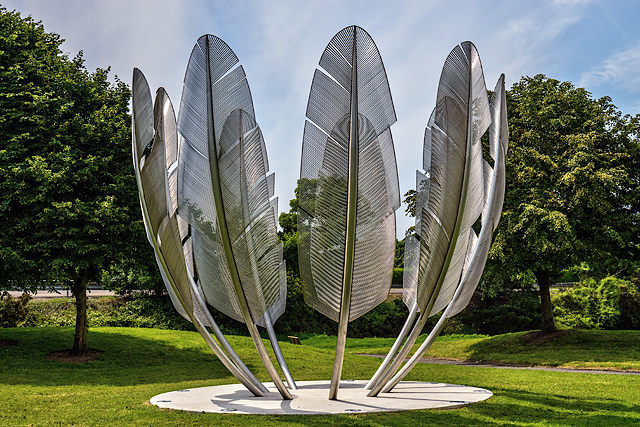 Courtesy photo | Atlas Obscura
The sculpture “Kindred Spirits” in County Cork, Ireland, commemorates a donation from the Choctaw tribe to the people of Ireland in 1847.

In 1847, the Choctaw Tribe, fresh off the Trail of Tears and struggling to put down roots in its new home in what is now Oklahoma, heard about another country across the sea where the people were also oppressed and hungry.

From their extremely limited resources, they raised $170 — the equivalent of about $5,000 today — and sent it to Ireland to help with food relief to offset the Potato Famine.

The Irish, apparently, have not forgotten that act of kindness. A few days ago, the Navajo and Hopi Families COVID-19 Relief Fund, a grassroots effort to get food and water to homebound elders during the pandemic, noticed a swell in donations to its GoFundMe page — and almost all the new money was coming from Ireland. “At first we thought we had been hacked,” said Cassandra Begay, the group’s communication director. But after making some inquiries, they tracked the new donations — which so far have totaled about $500,000 and are still coming in — back to a Twitter exchange between an Irish news reporter and a Diné engineer.

On Sunday, Naomi O’Leary, European correspondent for the Irish Times, had tweeted, “Native Americans raised a huge amount in famine relief for Ireland at a time when they had very little. It’s time for us to come through for them now.” Jumping on the opportunity, Aaron Yazzie of Los Angeles responded by tweeting the web address of the relief fund’s GoFundMe page.

The donations, ranging from $10 to more than $1,000 each, started pouring in immediately, and haven’t stopped. “We’re so grateful to the ancestors of the Choctaw Nation for their generosity generations ago, and to the Irish people for paying it forward,” said Begay. “It just goes to show the interconnectness of everything, which is our concept of k’e, and that a simple act of kindness can be profound.”

Begay said she was able to thank O’Leary when a UK radio show called Monday and had them both on. “I introduced myself in Navajo, so our language is all over Europe now,” she said, “and people were posting comments in their Irish language. It was really beautiful.”

President Jonathan Nez revealed the tribal government is also receiving donations from Ireland and the United Kingdom for its own COVID-19 relief effort. “This shows that although we are facing unprecedented challenges, this pandemic is bringing people together and unifying nations around the world,” he said.

In an email to the Navajo Times, O’Leary said she’s happy her tweet helped spark donations, but she wasn’t the first one to make the connection between the long-ago Choctaw donation and the present need. “Before I wrote my tweet, Irish people had already begun sharing the fundraiser and mentioning the Choctaw donation,” O’Leary wrote. “It came from the grassroots.”

Orla Keane, consul general at Ireland’s new consulate in Los Angeles, said she’s been enthusiastically following the story. “I’m really delighted that the Native Americans’ act of kindness over 170 years ago is remembered and that some of our people found a way to reciprocate,” she said. Keane said the Choctaw incident may have been fresh in people’s minds since 2017 marked the 170th anniversary of the Great Famine, and, among other events, a sculpture of a circle of giant feathers titled “Kindred Spirits” was unveiled in County Cork to mark the Choctaw contribution.

Are there any hard feelings among the Choctaw? After all, it was their act that precipitated this outpouring, and they could probably use some relief funds too. Not at all, said Casey Davis, the Choctaw tribe’s director of government public relations.

Davis said the Choctaws “cherish our friendship with the Irish,” who have maintained strong ties with the tribe since the 1847 donation, including recently established cultural exchanges and study-abroad scholarships. The Oklahoma tribe has suffered economically during the coronavirus crisis, having had to shut down its casinos and restaurants, which provided a major portion of its income. “We’ve had to make a lot of adjustments, but we’re getting by,” Davis said.

Begay said her group is planning to reach out to the Choctaw and thank them. They are also planning negotiations to coordinate their efforts with the tribal government’s, she said. As of Tuesday afternoon, the grassroots group founded by former Navajo Nation Attorney General Ethel Branch (on St. Patrick’s Day, appropriately enough) has raised $1.8 million. It sounds like a lot, but Begay said they might ultimately need as much as $10 million.

“Our goal is to give every Navajo and Hopi elder who needs it one two-week supply of food,” she said. “We’re still surging; this (virus) hasn’t peaked yet. And they say it’s going to come back in the fall.” So far the group has helped between 2,000 and 3,000 people all over the reservation, along with several Hopi villages, according to Begay.

O’Leary asked to share this message with the Navajo people: “I would like to extend my deepest sympathies to the Navajo people in such a devastating time. I know the loss of so many elders in particular is a difficult loss to bear, and that much community memory, language, and tradition passes with them. “I hope that you are not disheartened in your efforts to preserve your cultural heritage. I wish you strength in overcoming this pandemic and the cruel legacy of history. Know that you have friends far away.”