Being cut from b-ball fortuitous for KC wrestler 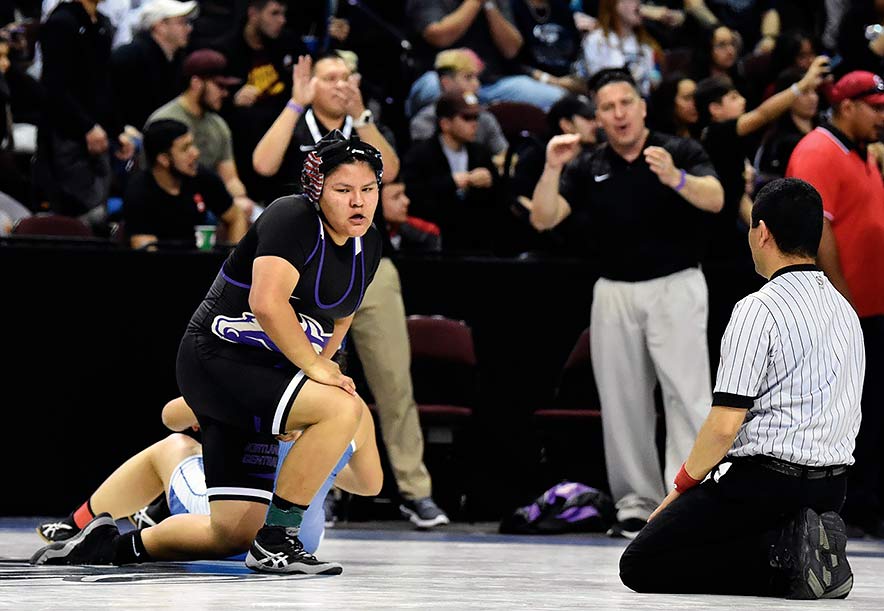 Jojera Dodge always thought she was going to be a basketball player.

She started young and dreamed of one day being a part of the girls’ basketball dynasty at Kirtland Central High School. Those dreams faded when she didn’t make the basketball roster, and a new dream was born.

“I was getting cut from basketball; it motivated me to do wrestling,” Dodge said. “I felt sad and mad at the same time because basketball was my favorite sport. But I used it, it motivated me.”

The sever with basketball opened up a familiar door to a sport Dodge once tried when she was 12 years old, and to dreams she never knew could come true. Over the weekend, Dodge’s new dream to become a state champion wrestler came true when she worked herself up from the bottom of the bracket to defeat the top wrestler in the state by a pin and earn her first-ever state title at 220 pounds in class 4A.

She said it was the best feeling she had after enduring such a tough loss at the start of the season.

“It feels amazing, like all my hard work and determination paid off,” Dodge said.

Dodge, 16 and a sophomore, entered the tournament 10-3 overall and was seeded second for state. Her first opponent forfeited the match and she went on to defeat her second opponent by a pin after nearly being pinned early in the match. She defeated Albuquerque wrestler Annalease Barraza by a late pin for the championship.

Kirtland Central head coach John Sandoval said it was a much-deserved win and that Dodge made history by being the first female wrestler at Kirtland Central to win a state championship title.

“She was a basketball player and she ended up getting cut from the basketball team. She came out to wrestling and now she’s a state champ,” he said. “She did give us a little scare in the semis and got thrown on her back, but she got up on top right away and went to work.”

Dodge dabbled in wrestling a few years ago and when she returned to it this season, she said it was almost like learning to ride a bike again.

She said she needed some help but once she got her bearings, it was smooth sailing.

“It was kind of hard, but I started to remember all my techniques and skills, and plus, my little brother (who is a freshman on the team) helped me,” Dodge said. “In the middle of the season I knew I could go all the way for state.”

Sandoval said he and the coaching staff could see it too.

He said Dodge is a silent workhorse. She put in the work without question and often did so without a word. She also mastered the fundamentals of the sport, which carried her far.

“Early on and even to the end of the season, it was simple technique; it wasn’t anything fancy. It wasn’t anything extraordinary,” Sandoval said. “She kept things simple when she got on the mat. She doesn’t say every much at all. You ask her a question, she shows very little emotions … but when it’s time to get on the mat to wrestle there’s like a switch that goes off. All of a sudden she’s aggressive, she’s trying to take girls down.”

Dodge said that is how she looks at wrestling.

She said she saves most of her energy for her opponents and agrees that she does operate like a switch.

“I just get in to a mindset to know that I can I have lot of confidence in myself,” she said, “and shut everybody out.”

With wrestling being an emotionally charged sport, Sandoval finds Dodge’s approach interesting and an asset that contributes to her success.

He said after most female wrestlers won their matches they were jumping with joy but Dodge forced one or two hops before hugging her coaches.

“A lot of kids will wrestle based on emotions and they make silly mistakes, and they end up losing matches because they’re wrestling on emotions,” Sandoval said. “She’s not like that at all. From the time the whistle blows, she’s cold as ice.”

Having won a state title at a young age and under unconventional circumstances, Dodge said she has no interest in returning to basketball.

She said wrestling is where her heart is and where it will remain.

“I’m just going to stick to wrestling because I found it was my favorite sport to do, and it’s not a teamwork sport, it’s your own. You do all your own work,” Dodge said. “I’m going to improve more and inspire my little brother to win a state title.”

Dodge was one of 14 girls who made the team this season compared to the two or four who showed interest in previous years.

He said it was an interesting turn in the program and a welcome one.

“There was 14 girls in the wrestling room which was a little shocking, a little surprising, I wasn’t expecting that many girls,” Sandoval said. “With us being more competitive and having more success as a team, its kind of drawn more kids to want to come out and wrestle for Kirtland.”