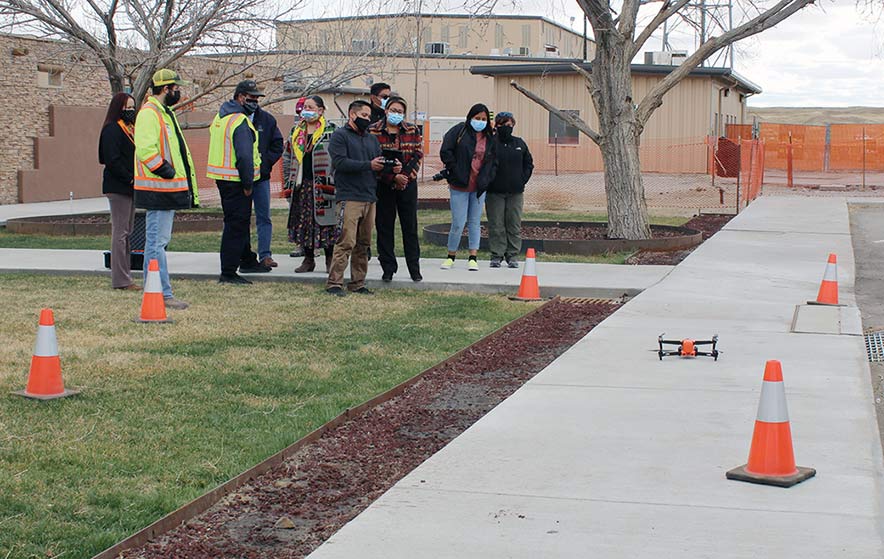 Last year, with COVID-19 in full bloom and everything locked down, a family approached Bisti Fuels, the arm of Navajo Transitional Energy Company that runs the Navajo Mine, for help.

An elderly family member who lived near the mine had not been heard from and, because of the curfew, they had run out of time to search for her.

“Our miners all have their essential worker letters, so they were able to continue the search,” explained Andy Hawkins, Bisti’s community engagement manager.

When the miners failed to find her in or nearby her home, the family called a relatively new volunteer organization, Shiprock Search and Rescue, organized by Eric Trevizo.

Trevizo had the idea of using one of the mine’s drones to look for the missing woman.

She was found, but unfortunately, she had already passed away. But the drone had worked so well Trevizo started thinking it was something Shiprock SAR should maybe have.

The only problem was the small volunteer group didn’t have any money, and the kind of drone they needed — equipped with an infrared and thermal imaging camera — cost about $10,000.

Hawkins took the problem to his managers, who agreed Bisti would match whatever Shiprock SAR could raise toward the effort.

“Eric raised his half of the money, so we did our part,” said Hawkins.

Trevizo, who co-founded Shiprock SAR with another volunteer who participated in the search for Ashlynn Mike and found her body, said he’s grateful to Bisti and everyone who pitched in, including Navajo Nation Council delegates Eugenia Charles-Newton and Amber Crotty, who he said have been advocates for his group from the beginning.

“I sold some of my reflective vests and did a benefit comedy show, but we still didn’t have enough (money),” he said. “One of the Northern Navajo COVID relief groups made up the difference, so we’re grateful to them as well.”

The device will enable the search-and-rescue group to conduct searches at night and in rough terrain where even horses and ATVs have a tough time going.

Unfortunately, it already has been called into action. When Trevizo was contacted by the Times Wednesday, he was out on a search for a missing boy, and they were planning to use the drone.