Local hopes to inspires others to pick up litter 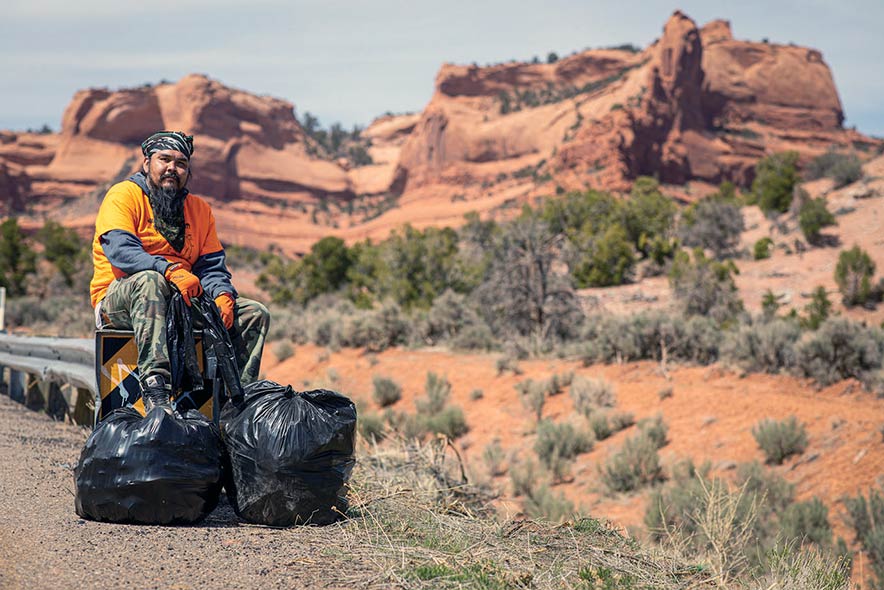 The amount of trash in the tiny strip along Navajo Route 13 was extensive.

But that did not deter Bobby Leonard Mason from grabbing a few bags of plastic bags and heading out to the highway to collect trash.

“One day, we’ll pick up the trash and the next day it’s back,” Mason said on Tuesday. “It’s very hard to keep it maintained. It’s a major pass-way, there’s a lot of traffic.

“Travelers, a lot people throw their trash out, I guess,” he said.

Mason was referring to the many travelers who use the route over the Chuska Mountains, better known as Buffalo Pass.

Mason said his wife began cleanup efforts in her community before he started helping her over 15 years ago. Lately, he’s been seeing more of people cleaning up the community.

“Throughout the year I see families picking up trash as well. I take pictures and I post them to my Facebook page,” he said. “It’s good seeing the community keeping our home clean.”

Mason and other residents have been collecting trash in and around the area as part of Earth Day on April 20, which has been an active movement to bring environmental issues to light since 1970.

Wearing a bright orange T-shirt, Mason walked along the highway quietly collecting trash. Most of the trash was empty aluminum cans, empty plastic water bottles and empty bottles that once contained alcoholic beverages.

While he knows the trash will always accumulate, for him it is about showing travelers driving by what it looks before and after the trash is picked up. And to motivate his community to continue keeping the place as litter free as possible.

“Inspiration is about community and trying to bring the community together,” Mason said. “That’s something I’ve always tried to do when I was young.

Navajo Nation Council Delegate Mark Freeland said his eight chapters have been active as well and have been out in force cleaning up their areas.

“I appreciate all of our chapters coming together and recognizing Earth Day,” he said on Wednesday. “It is a very important time to care for our mother earth.”

Delegate Amber Crotty was also appreciative of the efforts of her chapters during Earth Day. She shared an image of the Sanostee Chapter’s social media page with piles of tires, discarded kitchen appliances and regular trash all neatly piled and assorted at the chapter house.

The Navajo Police even issued a brief statement cautioning drivers to look out for people picking up trash along roads this week.

“This place was terrible,” Mason said of the road he cleaned. “Now, look at it, it looks good. The spiders and insects will be happy.

“Now, we should have a human day where we save ourselves,” he said.