Sobriety leads to better life for one mom 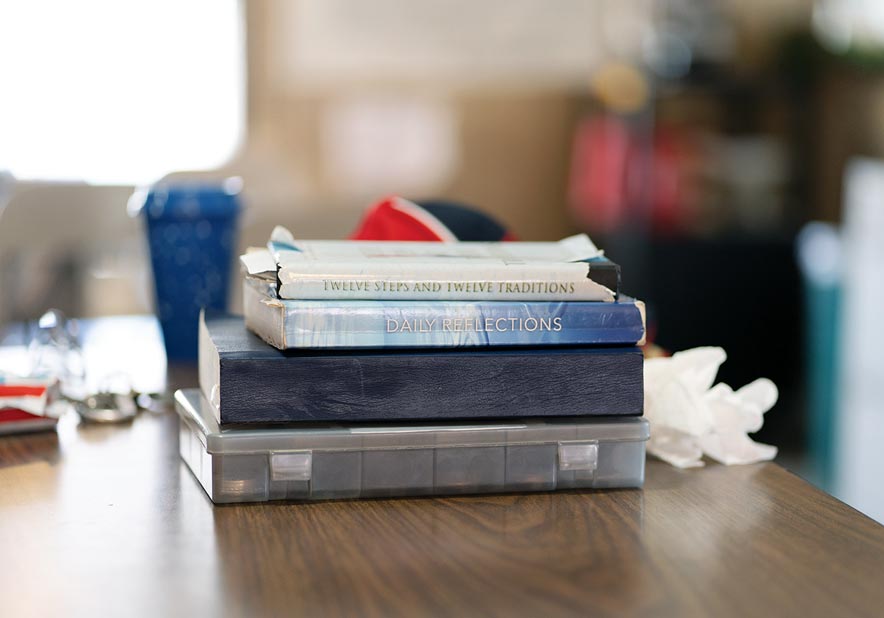 Navajo Times | Donovan Quintero
A stack of books dedicated to help a recovering alcoholic set on the desk at the Day-At-A-Time Club in Fort Defiance.

Editor’s note: The Alcoholics Anonymous asked the Navajo Times to use only first names for the story “Sobriety leads to better life for one mom” to help provide its members with the security that anonymity can bring for those still suffering from alcoholism.

Curiosity got the best of her, so she took her first sip at the tender age of 5.

Kim, who chose to be identified only by her first name, said seeing the suds from beer and smelling it was enough for her to sneak a quick taste.

Kim said she comes from an alcoholic family. Her late father, who died of liver cirrhosis when she was 9 years old, would open a can of beer and leave it unattended.

She didn’t like the smell or taste of beer, but her curiosity overcame her dislike for it.

Her family told her not to touch it because it’s dirty.

“That’s how I understood it,” Kim said. “I knew it was something bad; it wasn’t good.

“I used to sneak just to go get one, you know, just to taste it because even though I was told no, I would go over there and get one,” she said.

Kim said she didn’t indulge too much after taking her first taste. Perhaps it was because she saw the hardship her father was experiencing as his health deteriorated from liver cirrhosis, which she chose not to discuss. 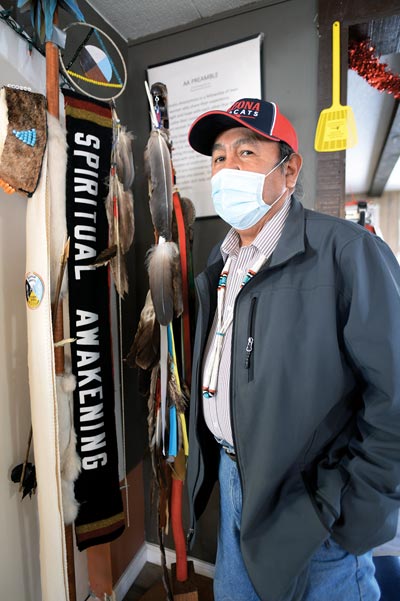 Navajo Times | Donovan Quintero
Larry Foster, a board member for Day-At-A-Time in Fort Defiance, stands next to the Indians in Sobriety Campout eagle staff. Since the COVID-19 pandemic began, the annual sobriety campout has been canceled. This year, it was canceled again, according to its Facebook page. Foster said he is a recovering alcoholic.

She didn’t taste the beer again for over 10 years. Kim said she began experimenting and abusing alcohol and drugs when she was 16.

“Sixteen was probably when I wanted to experience it,” Kim said. “It was something that was just there. It wasn’t for me. So, I just put it aside, and I chose smoking marijuana than drinking.”

For the remainder of her junior year in high school, she smoked and drank.

Kim remembered her mom still spoke to her about the dos and don’ts in life. But she began missing something.

“She (mom) was always at work, and I guess I felt alone. I thought, back then, I didn’t feel loved,” Kim said. “It’s just because my mom wasn’t always around, I think.”

To cope, she turned to what she believed helped her fill the emptiness of not feeling loved: alcohol and marijuana.

“Drinking for me for me was fun because it solved all my problems,” she said. “I think that’s why I pushed my family away, and I just went out with my friends and whatever there is to do out there, having fun, and that was drinking.”

Kim fell deep into her drinking. She was supposed to graduate from high school in 1999 but didn’t because of her heavy drinking.

She had to repeat high school and didn’t graduate until 2000, after which she moved to Phoenix, a place she called a “very bad place to go.”

She recollected working odd jobs, and her drinking increased, too.

At age 25, Kim found out she was pregnant and would have a baby girl. It seemed that this was a moment for her to rethink how alcohol was affecting her life in the desert metropolis of Phoenix.

She told herself, “This isn’t the place for me to have my daughter grow up.”

She returned to the reservation. However, the move home did not help.

“It seemed like my drinking and smoking got really, really worse,” she said.

Kim does not detail how often or frequently she drank and smoked marijuana after returning to the reservation. But for 13 years, the substances guided her path up until one day when Kim got a wake-up call.

“When my child was 13 years old, she was taken away from me,” Kim said. “I was drinking with her, and social services got involved. She got taken from me, and she ended up with her father’s parents.

“They took care of her for a couple of months,” she said. “You’d think you learned from that, but I didn’t.”

Kim was court-ordered to get help for her drinking problem. For five days out of the week, she got the required documents that needed signing to continue pleasing the court. Weekends were a different story, however.

“They (the court) didn’t know what I was doing. I did the same thing, drinking, and drugging,” Kim remembered. “All the time I thought my life was manageable, it wasn’t. My daughter, my baby, was crying for help, and I did not hear her.”

Kim attributes the beginning of realizing that she had a drinking problem to the first time her daughter was taken from her. Although that ordeal didn’t stop her, Kim said she believes now that it was her higher power that heard her daughter’s prayers and took her away from her mother.

In 2016, it happened again and social services stepped in and took her daughter away.

“We ended up in the same situation,” Kim said. “My daughter was taken from me again, from my husband and I.”

This time, the wake-up call and her higher power, moved her.

Kim didn’t see her daughter for a week and not seeing her baby for that long was an emotional experience that she had never felt before.

Kim was court-ordered again to help herself if she wanted to get her child back. And again, she found herself taking classes five days a week.

The second experience of her child being taken from her was more stressful. Between working full-time, attending the classes, and not having her daughter with her, Kim said life for her was “getting bad.”

“There was a gentleman there at mental health,” Kim said. “I was taking one of the classes, and he spoke about life, iiná.

“I don’t know, something clicked in my head that day,” she said. “I left, and I thought about my life, what I had done, from the day I was born and up to that moment.”

Self-realization came over her as she was driving home. She remembers crying and asking herself what she was doing to her body, to herself.

Through self-admittance, she realized her alcohol problem was out of control. When she got home, the first thing she did was sit her husband down.

“I said (to him), ‘You know what? I want t try it, I want to try and get sober, I want to get sober for her,’” she said, referring to their daughter.

Kim knew the challenges ahead of her were great because she never tried being sober for a week. She knew she wanted her baby back, too. So, her sobriety began.

One week passed. Two weeks passed, then three, then a month.

“That was something big or me in my life that I overcame – something that I needed,” Kim said.

Her path to sobriety did not begin happily or with serenity. She was starting to learn it’s possible to be sober, but her greatest challenge was convincing her daughter she was truly changing her ways.

At the time, she had to go to court every three months to update the judge on her progress. To Kim, her progress didn’t seem to mean anything to the judge because of her daughter’s answers.

“What the judge did was she asked my daughter one question: ‘Are you ready to go back to your mom?’ And every three months for a whole year, she said, ‘No,’” Kim said.

Her daughter continued, ‘What if I say yes. And what if I go home? What if she does the same thing when she gets drunk again? What if she hurts me again? No.’”

Then one day, while providing another update to the judge, her daughter answered yes to the judge’s question.

“In June of 2017, my daughter, my baby came home,” Kim said. “She finally said yes. And that was one of the happiest days of my life.”

Kim became emotional as she recalled the moment her daughter would be coming home.

In November 2021, Kim said she celebrated five years of sobriety. She made amends with her mother and is asking her daughter to forgive her for the pains she caused.

“I’m always asking her for forgiveness. And she already forgave me,” Kim said. “For me, it’s not enough because of the trauma I put her through all her life.”

Over the last five years, Kim worked hard to regain the trust of her daughter and mother.

“That’s something I thought I’d never have again,” she said.

Kim offered some words of encouragement to those trying to understand if they might be at a crossroads with their addiction but don’t know where to start.

“You just gotta have patience,” she continued. “Believe in yourself because we are sacred people, all of us, (and) we are all connected, one way or the other.”

Correction Feb. 1, 2022
An earlier version of the image caption misstated Larry Foster’s title. Foster is not the executive director of the Day-At-A-Time Club. He is a member of the organization’s board of directors that helps oversee the center’s operation in Fort Defiance.