To the traditional Navajo, the world is a school. 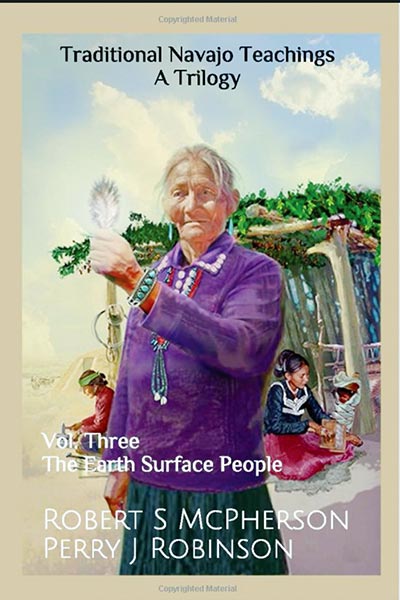 Every living creature, from the tiniest ant to the massive buffalo, has life lessons for those who are willing to listen.

Even things Western culture considers inanimate, such as rocks and trees, have a spirit and are to be respected in the Navajo universe.

Lightning, thunder, mountains, crops — even man-made objects like stirring sticks and weaving tools are to be cared for and can be offered to.

It is no exaggeration to say that in the Diné world, everything is sacred.

This is the main take-away in the second volume of traditional teachings by Anglo historian Robert McPherson and Diné hataałii Perry J. Robinson, “The Natural World” (2020, self-published but distributed by University Press of Colorado).

With academic background provided by McPherson, Robinson goes through a narrative about every common animal and force of nature, emphasizing that he’s just scratching the surface of the inexhaustible teachings from Mother Earth.

Even animals that are considered scary or undesirable like rats, bats, snakes and owls have their own necessary niche in the perfectly balanced cosmos of the Diné.

Continuing on a theme from the first book in the trilogy, “Sacred Narratives and Ceremonies,” Robinson explains what part of each animal can be used in ceremonies and why.

Each creature has desirable characteristics that can benefit humans who are suffering from the lack of them.

The authors spend quite a bit of time on hunting and the spiritually proper way to kill and butcher wild game, including respectfully leaving the head and bones of the harvested animal where it fell if possible.

One wonders what the early Navajos thought when entering the home of an Anglo trader with trophy heads mounted on the wall!

These protocols are far different from those for harvesting domestic animals, although these also deserve respect and gratitude for sustaining their owners. In this case, the respect consists of using every part of the animal and not letting anything go to waste.

People who do not respect animals, Robinson notes, will experience dire consequences including illness and hunger, and he postulates that many of the world’s present ills can be traced to our mistreatment of the Earth and its inhabitants.

Interestingly, the Diné have stories about animals not commonly found in Dinétah, such as moose and caribou.

Robinson explains these animals were sent north by the Holy People for the benefit of the Athabascans who chose to stay in what is now Alaska and Canada.

As with the other two volumes in the trilogy, “The Natural World” is beautifully illustrated with drawings and historical photographs. The gorgeous cover painting by Charles Yanito is perhaps the richest of the three covers.

Although they are in paperback, the beauty of these books makes them keepsakes and ideal gifts.

For days after reading “The Natural World,” I found myself looking at my surroundings in a different way.

The vibrant spirit of the earth and every plant or animal I encountered seemed to glow through a translucent shell. I have always been a nature-lover and gotten a sense of peace from being outdoors, but since reading these beautiful Navajo teachings I am filled with a profound sense of joy and gratitude every time I walk outside.

As with the first book in the trilogy, there will be people who object to the sharing of these teachings with anyone who cares to read them.

Robinson explains quite eloquently in the introduction to the first volume why he is choosing to share them at this time to prevent them from being lost forever.

I personally feel the books should be read slowly and with respect, not shared casually, and for Navajo readers, used as a starting point for asking questions of family elders or medicine people.

”Traditional Navajo Teachings Vo. 2: The Natural World” is available for $24.99 from amazon.com or upcolorado.com.