Fending for himself: As winter closes in, isolated elder chops wood, survives

At the center of what could be a cozy, warm 70-year-old hogan is a seven-foot log that keeps the roof from caving in on everything Harrison Kee owns.

Kee, 60, has a single-sized bed that sits on concrete blocks. At the end is a rolled up sleeping bag and several blankets.

On the other side of the hogan are stacks of couch cushions. Next to the pile of cushions is a small table, an iron skillet hanging on the wall, and a stove.

On each side of Kee’s bed is a dresser and a small shelf. At the edge of his feet is the log and a chair under which is a small pile of shoes.

It doesn’t seem like much, but to Kee this is home, all held together by the log.

His late father, Dominic Kee, built their winter home, Kee recalled Friday morning. Their summer home was not too far away.

“There was a hogan there,” he explained, as he pointed toward U.S. Highway 191. “That’s where we lived when I was growing up. The hogan that was there used to be our summer home.” 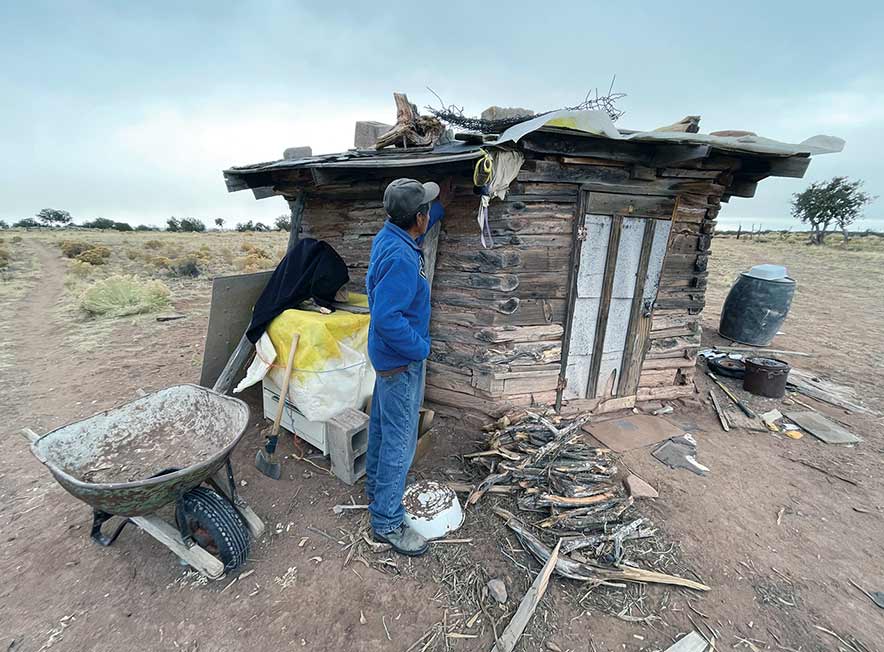 Navajo Times | Donovan Quintero
Harrison Kee points to a log that helps hold up his hogan his father built about 70 years ago.

His father built two homes — the hogan and a house — at their winter homestead, which is where Kee now lives. The house burned down three years ago.

He wasn’t home at the time, but a neighbor got ahold of him and told his house was on fire.

“I got here around midnight and it was it gone by that time,” he said.

It had snowed during that time, and he saw footprints. He suspected foul play.

“It looked like they were trying to burn the hogan down too,” Kee said, adding the Navajo Police investigated the suspected arson fire.

When police were not getting back to him, he went to them and asked where they were with the investigation.

“I went to the police station in Window Rock,” he said. “I was told there were no witnesses.”

His case was dropped.

These days Kee does odd jobs around the area. He carries his ax with him and chops wood to make a little bit of money for food.

Since the pandemic hit the reservation, the small jobs he did have all but gone away. To keep himself protected while out looking for work, he has two very well used and dirty medical masks that he keeps in his pocket.

On Nov. 27, Kee was coughing. When asked how he was feeling, he said he wasn’t feeling well.

But that doesn’t stop him from taking care of necessities like ensuring he has enough wood to keep warm with. Since he lives alone, he doesn’t have a choice.

On Thanksgiving, while many families were filling their bellies with turkey, Kee said he was out chopping wood. Since the roof has many holes in it, it gets quite cold in the little hogan. So having a good stockpile of wood for the night was vital. 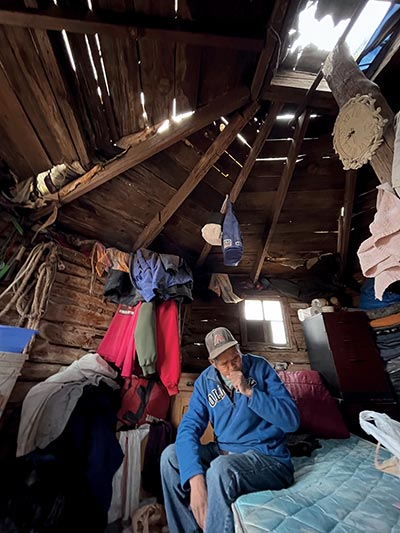 Navajo Times | Donovan Quintero
Harrison Kee coughs into his hands while speaking about the holes in his roof on Nov. 27 in Wide Ruins, Ariz. Kee said he was not feeling that day, but according to Navajo Nation Police Officer Marwin Joe, Kee has been well and continues to take his ax and wheelbarrow into the woods nearby to chop and collect wood he uses to keep warm and cook with.

On Nov. 27, snow began to fall on his hogan. Luckily, Kee covered the roof with plastic, which kept out the snow and wind. He said he wants to extend the hogan to the north.

His neighbor, Marwin Joe, who checks on Kee often, said he brought a plate of food, a bowl of stew and frybread to him the night of Nov. 26.

Joe, a Navajo Nation Police officer who’s known Kee and his family all his life, explained to Kee that his house is on the verge of collapsing.

“You will probably need a whole new home built for you,” Joe said. “The roof is probably rotten and the log holding it up won’t hold it up forever.”

Kee was quiet while Joe explained that his hogan is in dire need of rebuilding, possibly even tearing it down and replacing the hogan his father had built with a new one.

Kee covered his mouth and coughed again while looking at the sheepskin next to his bed. It is silent, other than the sound of the plastic on his roof rustling in the wind.

He got up and walked out. His mind was on getting water, he said.

“I use this wheelbarrow to get it,” he said. “It’s about a quarter-mile from here.”

Joe added Kee uses buckets to get his water from a well that’s kept his family’s buckets constantly filled.

The well Joe is talking about is a natural one that was concreted up decades ago. Joe remembers when he was a young boy, parking up against the small natural dropoff above the well and siphoning it out with a hose to fill their barrels.

The opening is covered by a well-worn wooden board and a rock. Next to it is a rectangular metal container that wildlife can drink from. A well used bucket with a rope tied to it, used to retrieve the water, lies on its side a few feet away.

The wash, now dry, shows evidence that it can become a raging river during the monsoon season.

The snow begins to fall. Instead of going to get water, Kee turns his attention to getting warm. He hopes that if it snows a lot, it doesn’t put weight on his roof, or else it could cave in.

“It usually starts to pile up in my house. I think that’s what caused the roof to start buckling,” he said. “I had to jack it up and put logs in place to support it.”

Kee pointed out two more logs on the south side of his hogan, which was leaning outward.

He clears his throat again and lets out a cough. He doesn’t attribute his coughing to COVID-19. After all, he lives in a remote area of Wide Ruins and travels everywhere on foot.

Since it’s gotten colder, he said he has focused on constantly chopping wood to keep himself warm.

Despite his hogan being in a decrepit state, Joe said Kee is not the type to ask his chapter or anyone to help him fix or replace it. 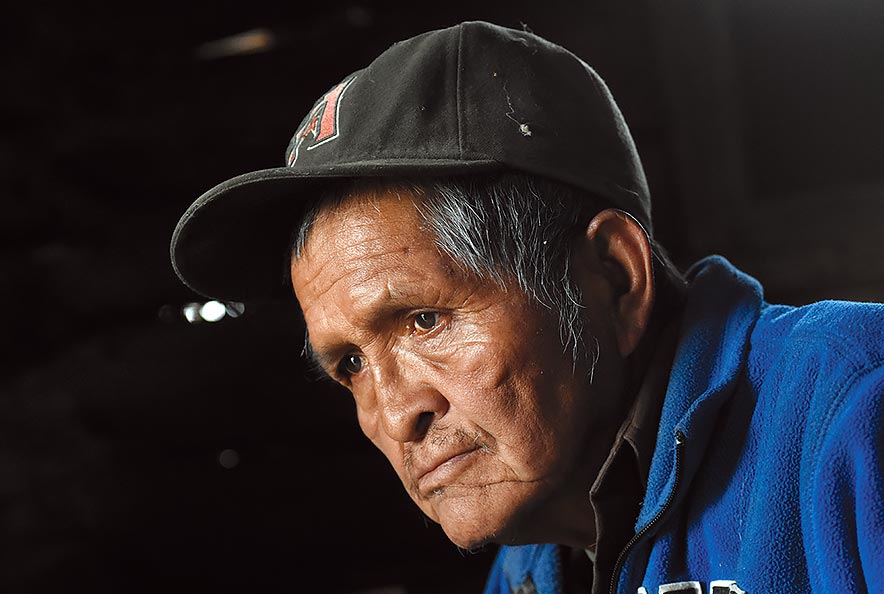 Navajo Times | Donovan Quintero
Harrison Kee from Wide Ruins, Ariz., speaks about the roof of his hogan on Nov. 27. Kee lives alone and has covered his roof with plastic to keep rain and snow out.

“He’s one of those people who does not ask for help. He doesn’t go to chapter meetings,” Joe said. “No matter what he’s going through, he just stays out here. He’s self-sufficient.”

Kee coughed again. He looked to the south and saw more snow coming his way. Since he doesn’t have electricity, he only has potatoes. He can’t afford meat or it’ll spoil. He coughed again.

Smoke begins to billow from his home as the wind blows the snow around. Kee is inside now. The day has just begun for him.