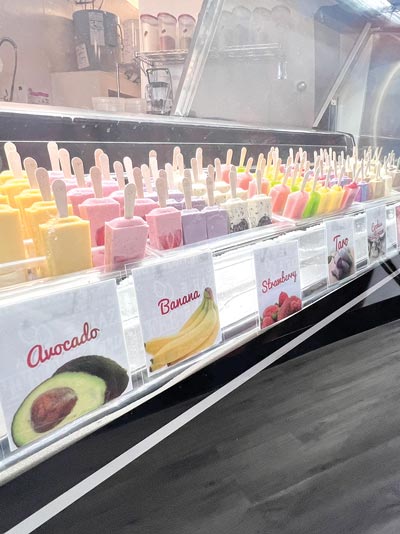 Courtesy photo | Franklin Yazzie
Different flavors of paleta, or Mexican popsicles, are on showcase inside a Paleta Bar. The paletas can be dipped into other flavors and coated with toppings such as M&Ms and Oreos.

And a store where people can buy these popsicles is opening Saturday in Mesa, Arizona (1917 S. Signal Butte Rd.).

And there are many choices, each described as gourmet, fresh and made-to-order.

“The Paleta Bar brand originated out of Albuquerque,” explained Yazzie, 24, who’s a co-owner. “We recently started expanding into other states.”

Yazzie said after graduating from high school in 2015, he enrolled at Central New Mexico Community College in Albuquerque.

When he decided that he didn’t have academic strength to finish college, he dropped out to take an entrepreneurial route because he knew he could operate a business instead.

“So, I found a couple opportunities in a construction consulting role, focusing around storm entrance restoration,” Yazzie said. “Through that partnership, I got connected with a couple individuals who ultimately became my partners on The Paleta Bar in Mesa.”

The individuals had connections and a business relationship with Claudius Dipo Alam, an entrepreneur, who started The Paleta Bar with two others in Albuquerque, in 2017. The store quickly began to expand to other locations from California to Florida.

“We talked with the individuals who ended up being the owners-operators for the Mesa location,” Yazzie said. “Essentially, they have the knowledge and the experience to run the store, but they didn’t necessarily have the capital to do the build-out.

“So, that’s where our half of the partnership on our end came into play,” he explained. “We helped them with a little bit of a funding as well as taking up a little bit of the operations on the (administration) side.” 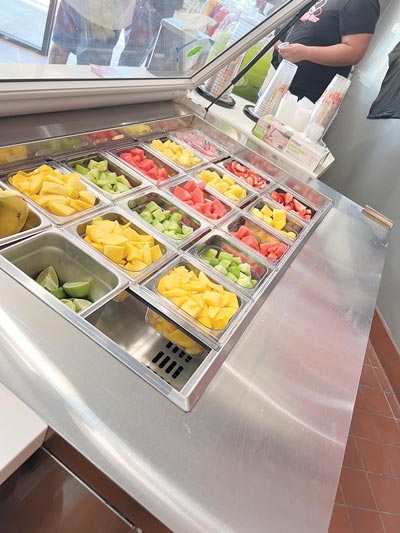 Courtesy photo | Franklin Yazzie
Fresh fruits cubed and ready for toppings are seen under a showcase. Different flavors of paleta, or Mexican popsicles, can be dipped into other flavors and topped with chunks of fruits like watermelon and strawberries.

The Paleta Bar serves all kinds of paletas, said Yazzie. They’re frozen dessert, but visitors on Saturday might be able to warm up these unique paletas.

Yazzie said they’re masterpieces made with fresh ingredients and ice pops – not an ice cream place.

“All of the popsicles, the paletas are made on-site,” Yazzie said. “They’re fresh, daily.

“Essentially, what the brand is, is we make various flavors on-site,” he said. “We … offer different dipping and toppings – chocolate, white chocolate, caramel, and Oreos and graham crackers.”

Yazzie said the fully dipped customized paletas, and the agua fesca, or “fresh water,” such as the watermelon drinks one sees at flea markets, or the Texas Twister drinks at the Navajo fairs.

“Those are the two best sellers,” said Yazzie, who’s the only Diné on The Paleta Bar of Mesa ownership team.

Yazzie said he wants to expand the paleta bar business with a Diné flavor sometime in the future.

“But with the design, we have a mural painted in the dining area (at The Paleta Bar),” Yazzie added. “We have mesas (from Monument Valley) painted on there. The artist drew inspiration (from Diné Bikéyah).”

This means Diné visitors will get a small taste of home when they visit the store on Saturday.

“When I brought this up to my friends and family, the first thing that came up was, ‘Are you guys going to be selling Piccadilly drinks there?’ There’s a possibility,” Yazzie said. “We want to stick to the brand before we get too experimental.”