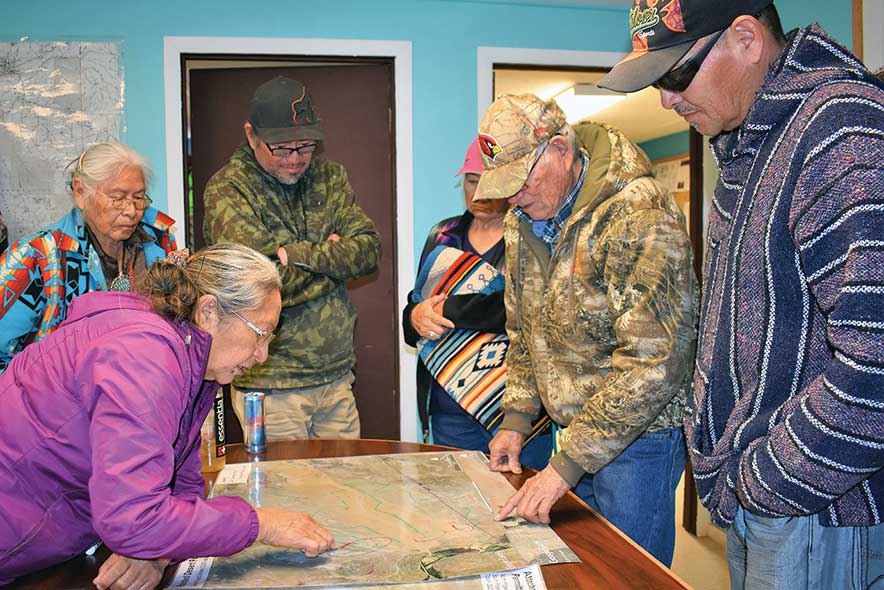 If Navajo Power can win over hearts and minds at Coalmine Canyon, it could succeed in launching solar development with the potential to transform Western Navajo, a region that has remained underdeveloped and economically depressed for decades.

“This project would be pioneering into alternative and renewable energy for the Navajo Nation,” said Navajo Nation Council Delegate Thomas Walker. “It represents private-sector development that’s utility-scale and could have a big impact on local communities if there is revenue sharing.”

However, in the heart of the former Bennett Freeze and other land disputes as well as the multi-layered legacy of Navajo Generating Station, there is a natural mistrust of private enterprises, said Walker.

“It’s completely understandable,” said Pratt. “I think people should be suspicious. They’ve had trauma happen and that’s something that we’re very sensitive about.”

‘All eyes on the Nation’

According to Navajo Power CEO/founder Brett Isaac, the company has been working on a solar project in Western Navajo and positioning itself to plug into the Moenkopi power substation, which is one of the hubs on the 500-megawatt transmission line that the Navajo Nation has now acquired the rights to.

After a false start in initiating the solar project with Cameron last fall due to a mix-up with the Navajo Nation’s Land Department over chapter boundaries, Navajo Power was instructed to start the cycle over again with Coalmine Canyon.

The 3,200-acre parcel they are looking to develop is mostly unused land north of the Little Colorado River.

Navajo Power eventually hopes to develop up to 750 megawatts of solar power in the area, which will require 5,000 acres, Isaac said.

“We’re looking at the future,” said Isaac in a Feb. 3 work session with Coalmine Canyon. “States are starting to require (that) their utilities get more and more of their power from renewable resources.”

Isaac said there is an unprecedented moment to bring some of that development to the Nation and create revenue, jobs and community development.

“All eyes are on the Navajo Nation as to how it develops renewable energy,” he said.

Isaac, who is from Shonto, Arizona, says Navajo Power, made up of approximately 20 experts on energy, economic development, law, and finance, has what it takes to create a pathway for renewable energy development on Navajo.

He believes the company offers something no other outside developer can: knowledge and experience working with chapter communities and navigating the complex Navajo Nation government processes and requirements.

“There aren’t a lot of developers that focus on indigenous and tribal lands,” he said. “For as long as we’ve been talking about renewable energy on Navajo, there’s not a lot to show for it.”

Isaac also believes this is the time for individual communities to take the reins and exercise local empowerment.

“Right now there’s a window opening up for communities to build these large projects and create streams of income,” said Isaac.

While a lot of the groundwork has already been done in order to advance the Coalmine Canyon project, Navajo Power needs a supporting resolution from the chapter to proceed.

It also still needs cooperation from Cameron Chapter because the access right-of-way for the power lines that connect to Moenkopi cross Cameron.

“Either way, we still have relationships and commitments in Cameron,” said Pratt. “We want to make sure they know we’re not walking away from them. We need to provide benefits to both communities.”

According to Coalmine Canyon Community Services Coordinator Augusta Gillwood on Tuesday, after numerous meetings with Navajo Power, the chapter is now drafting a resolution to request a new land withdrawal for the project, which will have to be approved by the Community Land Use Planning Committee before it goes to the next chapter meeting for consideration.

If the resolution is approved, Navajo Power can pursue the land withdrawal designation and a 25-year lease, which will need approval from the Navajo Nation Council’s Resources and Development Committee, and require environmental and other due diligence reviews.

Navajo Power has already invested in securing positions in the interconnection queues at Moenkopi substation, which can distribute power to places like Phoenix, Los Angeles and Las Vegas, says Pratt.

Buying those positions can cost a quarter to a half a million dollars each and Navajo Power holds a number of those, she added.

“You have to buy a spot in line just for the privilege of standing in line,” said Pratt in a chapter presentation. “It’s not for people who are scared of risk, it’s for people who are willing to take a gamble in putting a lot of resources in to it.”

Coalmine Canyon Chapter will, however, have to become Local Governance Act-certified to receive monies, which Navajo Power says they can help with as well.

Isaac said Navajo Power will have to expend from $4 to $8 million in the initial project phase just to get to the construction phase that will last one to two years and will cost an estimated $140 million.

Isaac said Navajo Power is also committed to electrifying the area —not through the solar project, which will export power — but through additional investment of capital generated by the project.

“If we’re sending megawatts to the Valley or L.A. and we still have people on the Nation who don’t have electricity, then we’ve failed as a company,” said Pratt. “We want to make sure that everyone has access to power.”

The target for beginning operation of the Coalmine solar project is by the end of 2023, which, if all goes as planned, is when revenue would start coming in from payments for power.

Isaac said Coalmine Canyon will also receive payments for use of the land as part of a lease agreement.

“The first payment goes to landlord, the community,” he said.

Pratt said that while Navajo Power isn’t a nonprofit, as a private Public Benefit Corporation, the lion’s share of profit is going to go back into the community.

Over the life of the 25-year project, Coalmine Canyon will receive at least an estimated $6 million for land payments, she said.

However, none of these figures have been put in writing yet, and, as of yet, no agreements have been signed.

Time is of the essence, because Navajo Power plans to submit for the recently announced Salt River Project request for proposals for solar development on Navajo.

“Salt River Project and Navajo Nation (Háyoołkááł Work Group) co-announced that RFP to develop at least 200 megawatts of solar on the Navajo Nation,” said Isaac. “SRP is opening up a competitive process so that projects like the one we’re proposing can bid into that project and essentially have the agreement to buy the power.”

Isaac says the company’s goal is to get the Coalmine Canyon solar project ready for the RPF by May 4, the due date, and that Navajo Power is going for “the whole 200 megawatts.”

In order to meet these requirements the proposed Coalmine/Navajo Power partnership will have to speed through all of the Navajo Nation government processes and studies, said Isaac.

Many Coalmine Canyon community members and officials are, of course, enticed by potential benefits of the proposed project and are cautiously optimistic.

However, they have yet to receive a complete business plan from Navajo Power that details projected revenues and costs over the whole life of the project, as well as a breakdown of the benefit to the community beyond the projected land payments.

Coalmine Canyon residents have also requested financials for Navajo Power itself and more information on the company’s investors.

Isaac explained that Navajo Power is self-financed and has a variety of “impact investors” who are dedicated to supporting projects that support certain ideals, such as mitigating the effects of climate change, promoting power equity, and benefiting local communities.

“We raise our own capital,” he said.

Isaac said some of the estimated project revenues and costs are variable or yet to be determined, such as taxes and payments to the Navajo Nation and price of power, which will be locked in when a contract is signed with a power distributer.

He also stated that some information regarding finances is proprietary since they are operating in a competitive market.

Chapter members have said, regardless, they want everything in writing so that it is understandable in laymen’s terms.

Chapter Vice President Phillip Zahne suggested in the work session that the chapter is going to have a problem moving forward with a resolution without all of the documents in hand.

He reiterated that what the chapter is looking for is transparency and documentation in everything related to the project.

Zahne added that he would also like to know if the Chapter could have some money up front since “money is already flowing” from Navajo Power to develop this project and others.

“Instead of waiting three years, I want it now,” said Zahne.

Pratt said there was nothing precluding Coalmine Canyon from receiving some monies up front, but that would have to discussed further.

Jared Touchin, spokesman for the president’s office, said, “The SRP project is open to any company that wishes to submit a proposal.”

Isaac said Navajo Power, as a developer on the ground, has been advising the Háyoołkááł Work Group as it develops policy and considers changing regulations, and has participated in conversations with SRP.

However, Pratt said that while Navajo Power has presented to the Háyoołkááł Work Group that has not been in an official advisory capacity.

“Our relationship with the Háyoołkááł is no different than any other company that’s come in and presented,” said Pratt.

In conclusion, Isaac said Navajo Power will need to confirm all the costs to update the pricing model in order to provide Coalmine Canyon their business plan.

“We’re working on a document for the community so that they can see what on a high level, these things look like,” he said.

Pratt said that since the last work session, Coalmine Canyon officials have already been provided more of the numbers by Navajo Power.

“I wouldn’t want any community to sign up for something that they didn’t 100 percent have faith in and transparency into numbers and process,” said Pratt.

She also said that more information on Navajo Power’s investors is forthcoming.

“We have non-disclosure agreements with our investors,” said Pratt. “Some of them will be revealed in a very short time period for those investors who are comfortable releasing that data.”