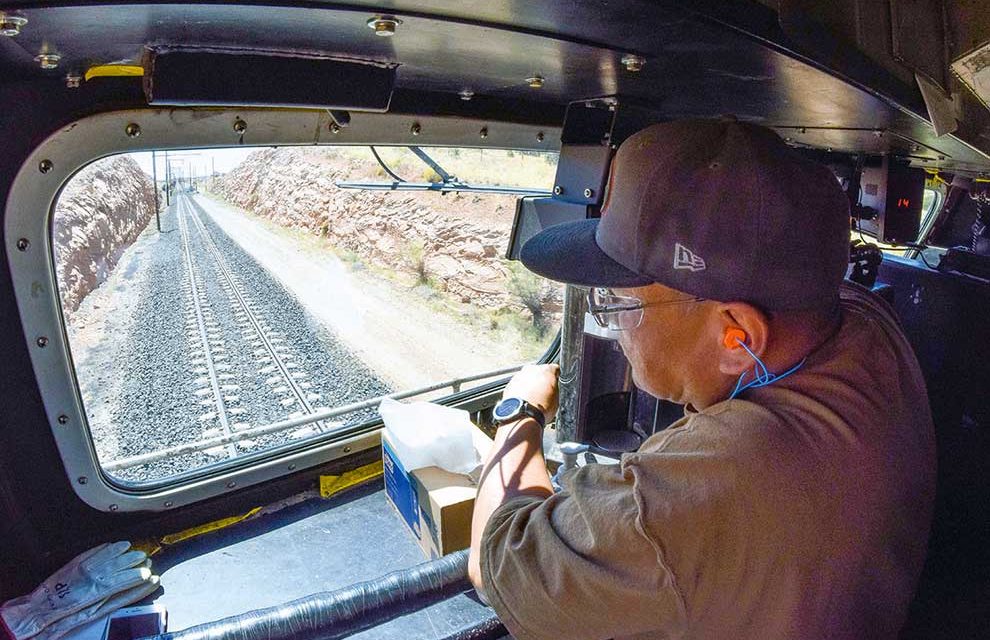 Special to the Times | Krista Allen
Thomas Long Jr. looks out the window of EA022 to inspect the rails on Friday morning during a coal run on the Black Mesa and Lake Powell Railroad.

When Thomas Long Jr.’s family asks him what he does for a living, he tells them, “I drive the train.”

Long, along with an assistant, operates locomotives on the Black Mesa and Lake Powell Railroad that hauls coal in hopper cars from Peabody Western Coal Company’s Kayenta Mine 78 miles to NGS near Page, Arizona. He works 10-hour shifts.

Long grew up in Gallup and graduated from Gallup High in 2000. He is Tódík’ózhí and born for Bitáá’chii’nii. In 2006 he applied for an Operations and Maintenance I position at NGS and the following year, Salt River Project took him on a seven-week-long training. He completed the program and relocated with his wife and children for his new job. Long started off in maintenance at the plant’s railroad terminus and worked his way up to O&M III, which allowed him to operate the locomotives. “I’ve been a train (operator) specialist since then,” Long said on Friday morning, during one of the last runs for 8,500 tons of coal on four locomotives, which were once used by the national railroad of Mexico in the 90s.

“On the train, it takes about two hours and 20 minutes, but on the highway, it’s about an hour’s drive” to the storage silos in the Klethla Valley, which is near the mine along U.S. Route 160, he said.

The railroad will shut down on Aug. 26 after the final coal delivery is made to NGS, said George Hardeen, plant spokesman. “People will gather to watch the final unloading, called the ‘NGS farewell,’” he said.

“And they will begin to use all the coal on the coal pile so that they bring it down (and) don’t have to transport it off-site,” Hardeen said. Long said when the railroad shuts down, it will be sad, but “it’s what it is –life.” The 37-year-old started operating the train in his early thirties. Because of this job, he says, he raised his family in Page, where his children grew up. His eldest child is now a freshman at Page High. “But now I’m going to start a whole new chapter down in Phoenix or in St. Johns, depending on where (SRP) sends me in the next couple of months,” Long said. “I’ll be under SRP still. They’re providing jobs for us and that’s pretty good.”

Moving means a new career path, new obstacles, and learning new things and “that’s good,” said Long. “When I started here, I was like 25 years old and I was 30 years old when I started (operating) the train,” Long said. “I’ve learned a lot (and) it provided a lot of opportunities I wouldn’t have gotten anywhere else.”

Long’s assistant, train operator Sylvester Shorty, was 21 when he started working at the railroad terminus at NGS. He is Tó’áhani, born for Tódích’íi’nii.

“I was going to college,” said Shorty, 34, from Tonalea-Red Lake, Arizona. “Because I ran out of funds, I needed to find work to (finance) my education. So I dropped out and joined SRP. That was back in 2006.” Like Long, Shorty also went through training and successfully completed the program and worked his way up. “I finished that and at the end, we had three options,” Shorty said. “The railroad was more interesting.

At the time, heavy equipment (operators) on the railroad side could possibly drive the train.” Operating the train rather than sitting in a control room was what Shorty wanted to do. “It was the best decision I’ve ever made,” Shorty said. “I learned quite a lot. It was fun. Best time I had was with the track crew. (I like) anything to do with the train, because you’re outside. You see the scenery and stuff like that out there. I never thought I’d be driving this train.” Shorty said over the years he’s seen drones hovering above the train and a lot of Toh Dine’é photographers and tourists.

As for strange things, he said, he’s seen people playing “Chicken” in front of the moving locomotives, people chasing the train, models in bikinis posing at the Shonto Junction road crossing, and UFOs along the railroad at night.

Workers will miss it

When the railroad shuts down, Shorty said he’s going to miss it because he was able to get up every day and work in his own backyard. “It was interesting,” Shorty added. “It felt like I was home all the time.”

The railroad was constructed by Morrison-Knudsen of Boise, Idaho, in the early seventies, according to the Powell Museum archives in Page. Construction began in February 1971. The BMLP Railroad was the first 50,000-volt electric railroad in the world. The high-voltage system eliminated the need for substations along the route, according to archives. The train ran on its own power for the first time in August 1973 and made its first run for coal in October that same year. Two trains made six 156-mile round trips each day. Each of the cars back then carried 122 tons of coal.

When the plant was running at full power before recent decommissioning efforts began, NGS received three deliveries a day, which totaled about 240 cars of coal. As of last week, the train still made three trips a day with around 85 cars, which is just under a mile long. “Each car holds about 100 tons,” said Long, whose working day does not begin nor end with his performance on the railroad. “And each locomotive is 200 tons and we’ve got four. Three a day. We’re trying to get all the coal from the silos right now. We’re trying to build up the coal pile and trying to get all the coal they have left.”

Long’s and Shorty’s shift usually begins prior to departure and they must pass a full range of security checks. Before the morning train left for the coal silos on Friday, Brian June at the NGS railroad office helped with preparations. “Yeah! Getting close, about 10 days left,” he said about the coal runs. Minutes later inside the lead locomotive, No. EA022, Long and Shorty prepared for departure. “The brakes, when we release them, it makes a lot of noise,” Long said moments before the train started moving at 8 mph. “So Sylvester will be driving out and I’ll be driving back. We’ll be going at 40 mph.”

Long said there’s excellent communication with everyone working on the railway. “We want to develop a culture of safety,” Hardeen said. “It doesn’t matter –at work or at home. And as a result of that, injuries have really fallen. Last year the railroad here won what’s called a ‘President’s Award,’ the highest safety award in the entire company.” BMLP Railroad last year took top honors in environmental excellence. Inside the locomotive is just enough room for two seats for both operators and their equipment. There is even a coffee machine and copies of the Navajo Times on the dashboard.

Traveling at 40 mph, Long mentioned that there have been more photographers lately than usual. “You’ll see them every 20 miles and then they’ll chase the train all the way to the silos taking pictures,” Long said. “At the silos, they’ll be waiting for us again and then travel all the way back (to the plant) again. “It’s been like that for the last two or three months now,” he said, “a lot of people. Last week we had about eight people who came by. We even had a guy standing between mile 25 and 28 when the night train was coming back. He was waiting for the train.”

Not as noisy as diesel

Shorty said the track ballast, the gravel that forms the bed of the railroad track, was changed to a modern type around 2012. He said the pieces of ballast are broken in such a way that they lock into each other, and that prevents movement. Hardeen said over the decades, things like the ballast and the rails were improved to decrease noise. “That’s an environmental benefit,” Hardeen said. “So if people live next to the train, it’s not noisy as it could be. Same reason it’s an electric train, to decrease pollution rather than being a diesel train.”

This was decided when NGS was built back in the seventies, during which the first Clean Air Act was enacted. There are around 36 road crossings along the railroad route, said Shorty, who sounded a whistle before every crossing. The operators said they have to sound a continuous whistle when an object of concern is observed on the track. Headlights are also used to increase train visibility whenever the train is in motion.

“The four locomotives together, that’s our power gear,” Long explained. “We’re in one of them right now. This is our lead locomotive.” The operators say this, without question, is the best job in the world, with panoramic views of the beauty of Diné Bikéyah – Lake Powell, wild horses, waterholes with blue-green water, K’aabizhii, Wildcat Peak, White Mesa, Margaret Arch, Naatsis’áán, Dzilyíjiin, and land unblemished. The train begins to slow down miles before the storage silos.

“The train slows down just enough to exchange money for barbecue ribs with the vendors at Shonto Junction,” Shorty joked. “We’ll pull up to the silos and we’ll notify dispatch that we’re going up to the silos and which side (of the two silos) we’re going to load on,” Long explained. “The track splits on the silos and we’ll either load on the left or the right side depending on the which they got full silos on.” The train on Friday pulled up to the right side where only one locomotive was used to pull all 85 cars through. Loading speed is 1 mph and it takes about an hour to load coal.

“From there, we’ll finish loading and then test our brakes out,” Long explained. “After we test our brakes, Sylvester will do a walk around the train to listen for air leaks – just making sure that no one messed with the train while we were loading.” He added, “From there, he’ll get back on and we’ll depart the silos and make our way back to NGS.” “Yeah, we’re going to miss this,” Shorty added.