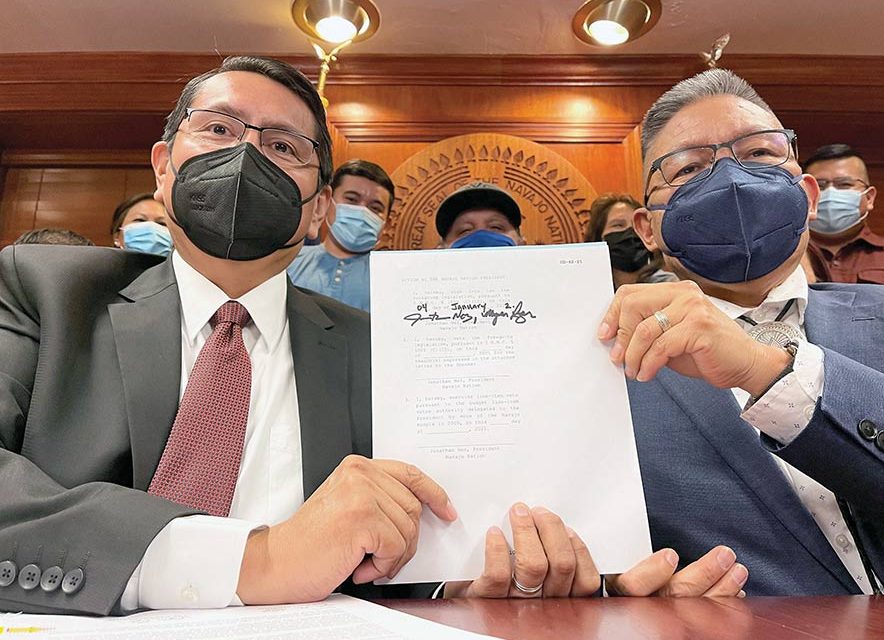 Twenty-twenty-two began with a new variant of concern: Omicron, which changed the trajectory of the COVID-19 pandemic.

The World Health Organization identified Omicron as more transmissible than Delta, the preceding variant of concern.

Covid no longer plays the dominant role it once did, but the risk of it – and other viruses – persists. 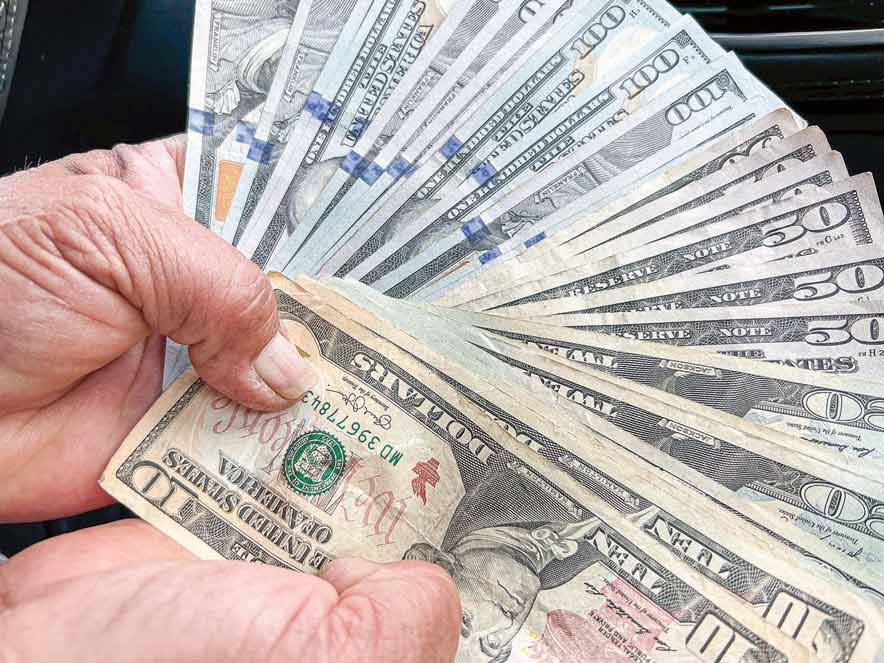 Daryl Noon was sworn in as the Navajo Nation’s police chief Jan. 3, 2022. The next day, President Jonathan Nez approved $557 million in American Rescue Plan Act funds for Hardship Assistance to about 250,000 Diné adults and children.

This year was like no other, following years of uncertainty, Mpox, RSV, influenza, and Covid, less severe and less deadly than the last two years.

Job openings across the country increased to a record high, surpassing the number of unemployed people looking for work. Workers took advantage of strong employer demand to pursue better opportunities.

We were interested in gas prices as Russia’s invasion of Ukraine increased the cost of oil and gasoline. While prices at the pump soared, peaking at $5 per gallon, so did food commodities. And the war heightened fears about inflation.

Before summer began, we saw record heat and floods across Navajoland, a dwindling Colorado River – nearing “dead pool” – and water levels of Lake Powell, now at its lowest level since it was filled in the mid-1960s. We’re reminded of a climate crisis and to cut emissions in half by 2030.

Raging wildfires on and near Dook’o’oosłííd produced plumes of smoke in the west. Our hataałii men and women said the Native tribes are no longer respected. Our cultural identity and belief systems are damaged by artificial snowmaking and the catastrophic wildfires near the sacred mountain.

While the Navajo Nation made great strides in COVID-19, this year taught us to keep persisting, forging on, and praying – just as the late Buck Navajo Sr., the last Naatsis’áán hataałii who passed on in November, taught. 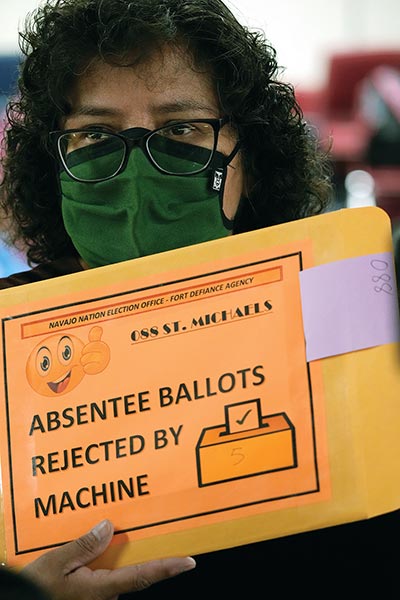 Navajo Times | Donovan Quintero
Voter registration specialist Veronica Curley holds up a packet of absentee ballots rejected by the Optech IIIP-Eagle ballot machine. An election recount is in progress and votes are re-tabulated on Monday afternoon at the Department of Diné Education building in Window Rock.

As the election recount took the stage, we were reminded of the power of the ballot box and continued to fight for justice until we were heard because our voices were stronger together.

Calls for help and answers became louder this year when Ella Mae Begay’s case was shoddily handled and the investigation unsystematic – often the case for Native American victims and their families.

As workers returned to offices, students back in classrooms, stores, and restaurants opened for business, so did a few of the Navajo fairs, but some weren’t as lucky to rebound from Covid.

Those are just a few big news stories. But we also investigated, explained, and exposed mis- and disinformation that distorts public perceptions of truth. 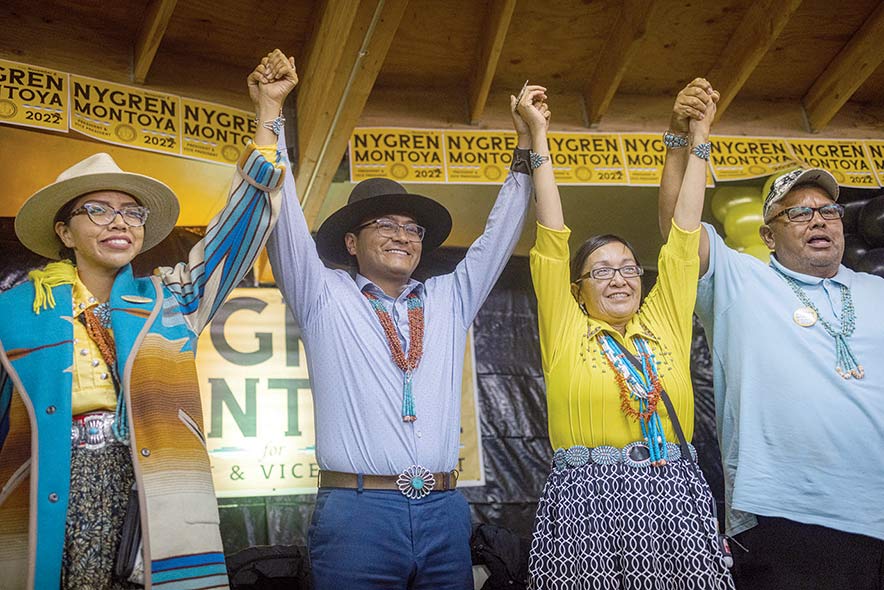 Navajo Nation president-elect Buu Nygren and his running mate, Richelle Montoya, raise their hands as they celebrate their victory over incumbent Jonathan Nez on Tuesday night at the Navajo Pavilion on the fairgrounds in Window Rock.

As we deal with a fragile Diné economy, we’ll be starting the new year with a presidential transition and inaugurating nine women into the 25th Navajo Nation Council and the youngest president in the tribe’s history Jan. 10, 2023.

We at the Navajo Times continue to work through the pandemic constraints and disruptions to get the news. Our photographers continue to capture the pain, resolve and hope of our changing Navajo Nation. 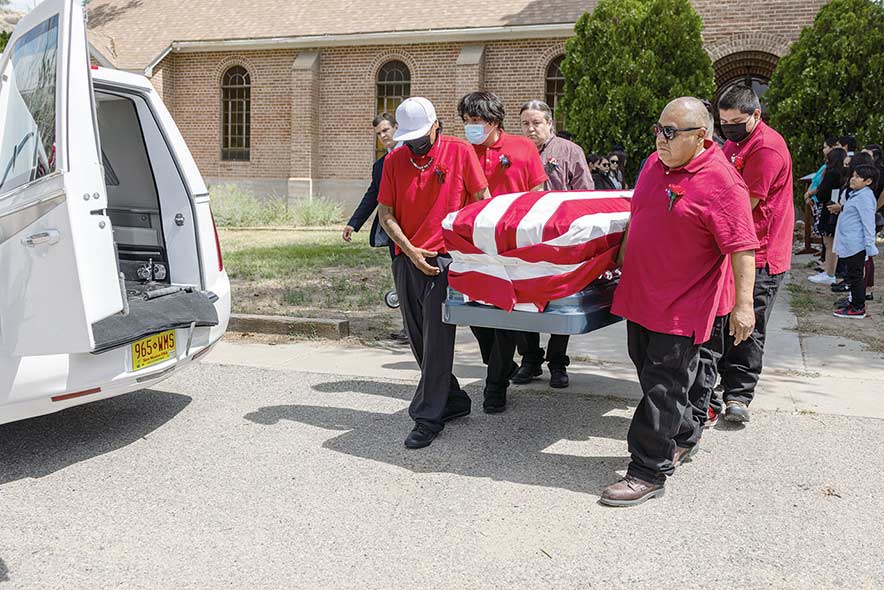 Navajo Times | Sharon Chischilly
Pallbearers carry the coffin for late Code Talker Samuel Sandoval from the church to the hearse on the morning of Aug. 3 at the Ryder Memorial Chapel in Farmington.

Our five agencies have many things in common. Still, they are also home to natural resources – vast reserves of coal, uranium, oil, and natural gas – at the center of competition and interest.

Looking back and planning, we can’t forget some cases to watch in 2023: the pending high court Indian Child Welfare Act decision and Bears Ears.

Tribes call ICWA “one of the most important pieces of federal Indian legislation ever enacted” and warn that a ruling in favor of the challengers “would work profound harm on” Native children and tribes.

Shash Jaa’. The Navajo, Hopi, Ute Mountain Ute, and the Pueblo of Zuni got clearance to intervene in litigation challenging the Biden Administration’s decision to restore the original Bears Ears and Grand Staircase-Escalante boundaries. Utah state is challenging Biden to restore the national monuments, saying the Antiquities Act is illegal.

Finally, we’re going through enormous changes at the paper.