The Coconino County Sheriff’s Office is looking for clues and information into the discovery of remains of an unknown man in a rural area of the county east of Flagstaff. 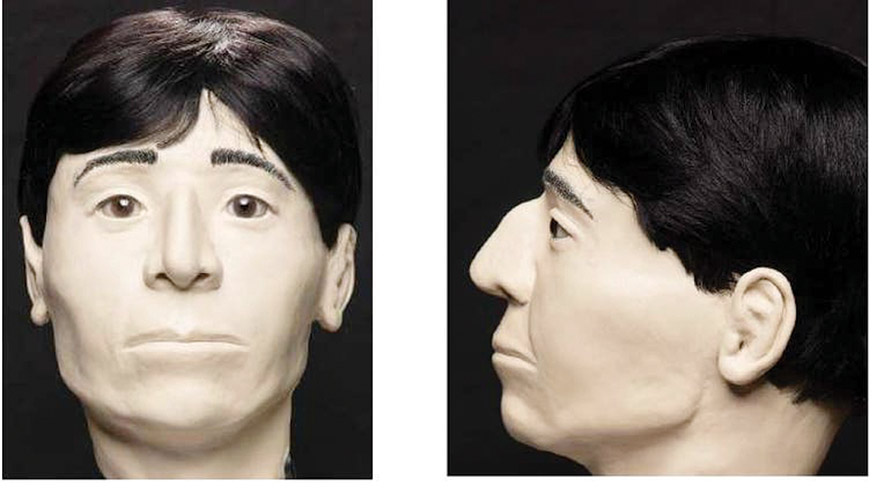 Police rendering of an approximation of how the remains of a manfound in Coconino County looked based on the measurements and attributes of the recovered remains. Hairstyle, eye color and facial hair may have been different. The sheriff’s office is asking for anyone with information on the identity of the man, to call their office at 928-774-4523 or Silent Witness at 928-774-6111.

Officials said ranchers found the remains in January of this year. It’s not known how long the remains were there before they were found.

The initial investigation hasn’t been able to identify the person. The Phoenix Police Department’s forensic artist, created a likeness of the person.

The rendering is an approximation of how the man looked based on the measurements and attributes of the recovered remains. Hairstyle, eye color and facial hair may have been different.

HOLBROOK – On Dec. 8, Ryan Michael Brown, 40, was arrested after fighting with deputies and trying to escape, the Navajo County Sheriff’s Office reports.

Brown was sought for a felony warrant and when deputies arrived at an address in Overgaard, they located him hiding. They attempted to call Brown out of hiding multiple times.

Brown complied with commands but, while being placed under arrest, he resisted and attempted to escape. During the struggle, a Taser was deployed subduing him and allowing deputies to arrest him.

During a search of Brown, he was found to be in possession of a handgun, marijuana and 3 ounces of a white substance believed to be methamphetamine.

Brown was booked for a felony warrant, resisting arrest, prohibited possessor, possession of a deadly weapon and possession of dangerous drugs.

ALBUQUERQUE — Mathew Vargas, of Gallup, was sentenced Wednesday by McKinley County Judge Robert Aragon to 7.5 years in the Department of Corrections.

Vargas was convicted following a jury trial in April 2021 for vehicular homicide.

On Oct. 14, 2017, just outside of Gallup, Vargas drove while under the influence of Xanax and into a head-on with a truck driven by 59-year-old Ernest Baker, who died.

Vargas was also in possession of Xanax pills that he did not have a prescription for at the time of the crash.

Baker’s family spoke during the sentencing, describing the victim as a pillar of the community.

This was the fourth sentencing hearing for Vargas, with the most recent being rescheduled because Vargas collapsed in the courtroom. He later tested positive for alcohol and registered a blood alcohol level of .29.

Pair of accidents close I-40 east of Flagstaff

Arizona DPS say the first is a two-vehicle fatal accident near Buffalo Range Road. One person was killed after possibly being ejected from one of the vehicles. The cause of the accident is unknown.

The second accident involved two tractor trailers and it blocked the roadway near Two Guns. The accident does have injuries involved, but it is not known how serious the injuries are.

The highway fully reopened between Two Guns and Buffalo Ranch Road at around 9:30 p.m.

In September 2020, park visitors at Phantom Ranch reported that they believed a maintenance worker had recorded them while using a toilet. The individual was subsequently fired and removed from the park.

For the past year, agents have been working to identify the scope of the suspect’s activity. At this time, there is no indication that these images were shared or distributed by the suspect.

This remains an active and open criminal matter. At the same time, the Department is conducting an internal review.

If you or someone you know used the toilets at Indian Garden along the Bright Angel Trail on the north side of Phantom Ranch, or at the Bright Angel Campground, between November 2018 and September 2020, you are encouraged to reach out to investigators.

Call 928-318-8770 or fill out a secure and confidential online form on the FBI’s NPS webpage to determine if you may be a victim.

Victims may be eligible for certain services and rights under federal and/or state law.

YA-TAH-HEY, N.M. – The family of Jimmy “Shon” Peterson, 57, reports that he’s been missing since Nov. 19 when he was last seen leaving his home and heading to T&R Market then on to Gallup.
He is 6 feet tall, weighs 160 pounds and has brown eyes and brown peppered hair.

Anyone with any information about him is asked to contact the McKinley County Sheriff’s Department at 505-863-1410 or Lamar Peterson at 928-206-0868 or petersonlamar@gmail.com.