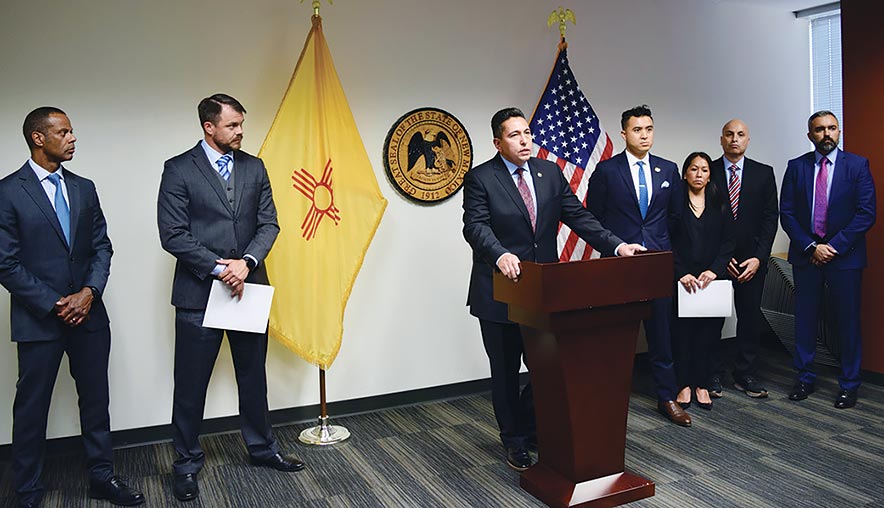 The Albuquerque FBI Division, with Raul Bujanda, special agent in charge, announced a new database they have been working on for the last six months – a vetted list of missing Indigenous persons in New Mexico and across the Navajo Nation, including in Arizona, Colorado and Utah.

They will update the list every month, he said.

All agencies want to see a complete list. The FBI said if an Indigenous family member who is missing is not included on this list, “the relatives are urged to contact their local or tribal law enforcement agency and ask them to submit a missing person’s report to the National Crime Information Center, or NCIC.

“If further assistance is needed,” the FBI said, “family members or local law enforcement can contact the New Mexico Attorney General’s office or the FBI.”

Currently, there are 177 names on the list, some going back years and some reported this month.

The list includes 61 women and almost twice as many men with 116.

The youngest person on the list, Anthonette Cayedito, disappeared from her home in Gallup in 1986 when she was nine, and a progressed photo of her is included on the database.

Many of those reported missing are young, teen-age girls and boys, the most recently reported on July 14, 2022.

Raúl Torrez, Bernalillo County district attorney, said that if a missing person has had contact with law enforcement somewhere in the country, this information will reach the NCIC and then family members can be notified.

Leads generated from this list in the last two months helped solve two cases, he reported.

The new database, as yet unnamed, was announced at a press conference that was hurriedly called mid-morning on Monday for 3:30 p.m. that afternoon, July 25, at the offices of New Mexico Attorney General Hector Balderas.

Others included New Mexico Department of Public Safety Secretary Jason Bowie, who said his office “is the first agency in the United States to modify its NCIC Missing Person Form to allow reporting agencies to identify Indigenous people and their respective tribes, pueblos, or nations.”

Bowie has also said his department has an antiquated computer system that is being updated and they hope to see it online by 2023.

Bujanda was quick to admit that attention to this issue has been a long time coming. He and other officials stressed that all the cases are going to be treated with great care.

It is hoped that the database will be a model for other states.

This effort is an attempt to begin to remedy a longstanding problem. Family members have long felt the pain of a missing relative compounded by inaction by authorities.

It is a matter of public record that, nationally, general police crime data is not reported to centralized databases.

According to a recent report by Ellen Rabin for the New Mexico Legislative Finance Committee, while the state is actually one of the top five best states for reporting crime, only a fragmented picture has been available.

Even though laws were passed and law enforcement may not receive full funding if reporting isn’t done, the problem continues.

Austin Fisher of Source New Mexico reported that lawmakers were concerned when they heard the report last week.

Frank Fisher, FBI spokesman, explained that the new database is not FBI information.

“This project is only a start,” he said. “What this list represents are the 177 Indigenous persons that are in NCIC and are actively being sought across the country by all law enforcement.”

He emphasized that the list is a work in progress and said, “We expect the list to grow as it is publicized, and relatives of those missing Indigenous persons who aren’t on it to contact their local and tribal law enforcement.”

He also explained that some names may have dropped off that should still be on the list and, if that has happened, families need to get the information to law enforcement to get the name back on the list.

He said, “At the same time, it’s possible some of the names of individuals currently on this list will drop off as they are located.” The Albuquerque FBI Division plans to update the list monthly on its website, WWW.FBI.GOV/MMIP.

This list is a validation of the status of missing indigenous persons. as listed in the NCIC. The information the NCIC gets is from the local/state/tribal law enforcement partners.

“We discovered many records of missing Native Americans were incomplete or outdated” Fisher said. “Because we identified names of missing Indigenous persons from sources other than NCIC, we ensured each and every one of those names was accurately listed in NCIC as a missing person.

“Through this process using a wide array of other databases and sources, as well as contacting the law enforcement agencies that put the original data into NCIC, the FBI succeeded in vetting 177 names of indigenous persons in New Mexico and the Navajo Nation who are actually missing at this time,” he said.

Fisher answered, “We didn’t add names to NCIC. We vetted what was already in there against other databases and with the help of our partners, like the Navajo Nation, to determine if the records were current and valid.

“If they were,” he said, “they were included in this list of 177 names we released yesterday. This is still a work in progress.”