Ten-year old Anthonette Cayedito disappeared from her home in Gallup in 1986. Jamie Lynette Yazzie, 32, was last seen on the evening of June 30, 2019 in Piñon, Arizona. 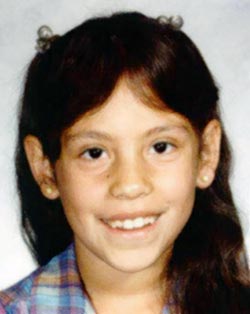 Courtesy photo | FBI
Posters in Navajo and English depict 10-year-old Anthonette Cayedito at the time of her disappearance along with her presumed likeness 20 years later. 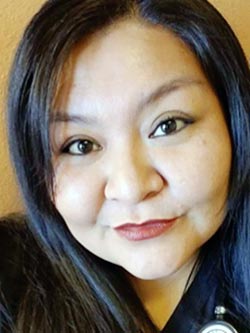 Courtesy photo | FBI
Jamie Lynette Yazzie, a nursing assistant, was last seen on the evening of June 30, 2019 in the area of Piñon, Ariz.

Donnie Wade Barney, 32, was stabbed to death inside a hogan on Shadow Farm Road in Rehoboth, New Mexico, in 2017. Tyrell Bellson’s body was found near Highway 53 on Zuni Pueblo lands. He was 35. Wilson Joe Chiquito, 75, was beaten to death at his home in Counselor, New Mexico.

While some of their ages are decades apart and the victims are from different Navajo Nation chapters and border towns, they have one thing in common: Their murders or disappearances have never been solved. Cayedito, Yazzie, Barney, Bellson and Chiquito are among 13 unsolved murder and disappearance cases, one a double murder of non-Navajos, that occurred on or near the Navajo Nation.

The FBI aims to close them. But FBI spokesperson Frank Fisher said the federal agency can’t do it alone. “We’re asking for the public’s help,” he stressed. “Somebody out there knows something.” To reach out for new leads, the FBI recently published posters in the Navajo language hoping new tips will lead to long-awaited justice and peace of mind for victims’ families. “They have loved ones who miss them,” Fisher said. “They don’t know what happened to (their relatives). I think they want some justice.”

Posters in English have been around for a long time. “Years have gone by and the cases are not solved,” Fisher noted. During the ongoing COVID-19 pandemic, the public awareness campaign is online. The downloadable public notices in Navajo and English can be found at www.fbi.gov (search “FBI seeks public’s assistance in homicide and missing person investigations in Navajo Nation”).

They include a description of the victims, the nature, time and whereabouts of their murders or disappearances, and photographs. For example, at the time of her disappearance, Cayedito, an elementary student, wore glasses and was known to wear a silver chain with a small turquoise cross pendant. Her poster includes a depiction of what she might look like at 36 years of age. She has Navajo/Italian ancestry.

Once the pandemic subsides, Fisher said he and other agents plan to reach out in person. “We know that many families on the Navajo Nation don’t have access to the internet,” he said. Fisher hopes people will look at the posters and recognize a face and say, “This person didn’t deserve this to happen to them,” and remember details that could help in the renewed investigation. 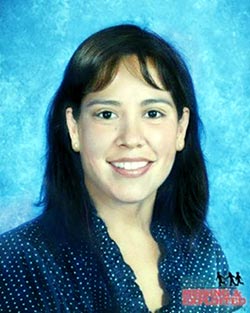 Courtesy photo | FBI
Posters in Navajo and English depict 10-year-old Anthonette Cayedito at the time of her disappearance along with her presumed likeness 20 years later.

“When you see these people, it seems like you know them and they are staring back at you, almost like they are saying, ‘Solve my case, give me justice,’” he emphasized. “These cases, they need to be solved now.” The first poster published in the Navajo language was of Wilson Joe Chiquito. He was brutally murdered some time around Valentine’s Day seven years ago at his home in Counselor.

Samuel Sage, the chapter’s community services coordinator, said he hopes someone will come forward. “This a big loss for the community,” Sage said. “He was a medicine man and a traditional herbalist. A lot of people went to see him. “We don’t think it was done by someone from the outside,” he added. “Myself and several other people in the community have always stated people know who did that, but no one is coming forward. Maybe people think it will just be forgotten.”

Sage said Fisher was invited to make a presentation at a chapter meeting about the renewed investigation, but it had to be postponed due the COVID-19 pandemic. As soon as the pandemic subsides, the chapter plans to set another date.

While respecting traditional considerations, Sage said the FBI’s campaign for justice and closure is critically important. “For the sake of everybody,” he said, “we need to put these things to rest so families can live in peace and not worry about what happened. We can’t just let it go.”

He encourages other chapters to open their doors to the FBI. Regina Roanhorse, Alamo-Tohajiilee Judicial District court administrator, concurred. “I think it’s a great initiative because it provides opportunities for those who have information,” she said in an email to the Times. “It also signals to the communities that these acts of violence and subsequent deaths happen and we need to take action.” 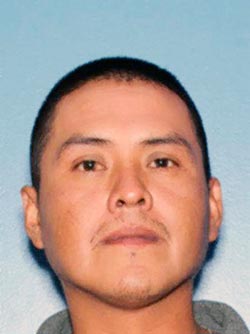 Courtesy photo | FBI
The FBI is offering a reward of $1,000 for information leading to the arrest and conviction of the person or persons responsible for the death of Donnie Wade Barney.

Fisher said that the bureau is working closely with the Navajo Nation Division of Public Safety and that this is a long-term effort. “We are not going to stop,” he said. “We want to keep going and eventually place huge banners across these posters that read ‘Solved.’”

The nine other unsolved cases are those of Amy Lynn Hanson, Caldwell Dewyne Smith, Keith Travis Nastacio, James Naswood, Laverda Sorrell, Tyrone Tytis Tallman, Alvin Yazzie Jr., and non-Native tourists Mathew and Phillip Reagan. The campaign is a joint effort between the Albuquerque and Phoenix FBI offices. Rewards are offered in the amounts of $1,000, $5,000 and $10,000 in some of the cases.