On Monday, the curtain was raised for the start of the New Mexico state basketball playoffs.

Twenty-two games were played in Class 1A, 2A and 3A, which included a handful of local teams.

Four local teams advanced into the state semifinals with the Tohatchi and Navajo Prep girls moving ahead in the 3A girls bracket while the Navajo Prep boys got over the hump with a one-point victory in their quarterfinal match.

In the 2A boys bracket, top-seeded Rehoboth also advanced. 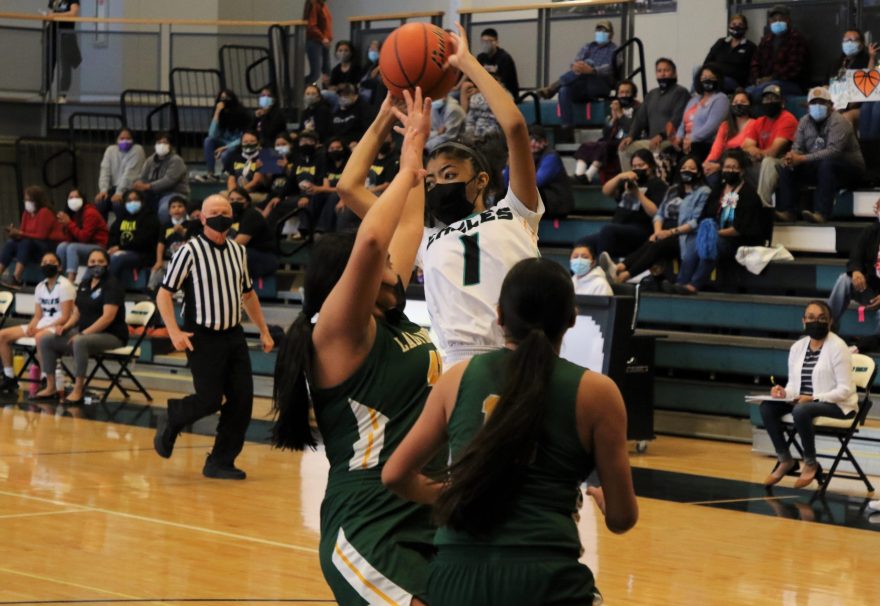 Daily Times | Matt Hollinshead
Navajo Prep’s Nicole Martin (1) passes the ball down the right side against Thoreau during the 3A state quarterfinals on Monday, May 3, 2021, at the Eagles Nest in Farmington.

Of the four teams, the Tohatchi girls pulled off a stunner as the Lady Cougars upset No. 2 seed West Las Vegas 61-50 at Bernalillo High School.

“We came out with a strong start and we led them at the half and third quarter,” said Tohatchi coach Tanisha Bitsoi, whose team improved to 9-4 overall. “We made a few errors in the fourth but I’m glad that we were able to stay compose and finish out the game.”

The seventh seeded Lady Cougars hit 12 of 19 free throws in the final stanza to pull out the win.

“We’ve been stressing free throws throughout the season and the ones who went to the line hit some clutch free throws,” Bitsoi said, while adding that they also sent the Lady Dons to free throw line.

“We fouled them too and they got within six,” she said.

Nonetheless, Tohatchi made enough of them to pull out the 11-point win.

“Free throws were important at the end,” Bitsoi said.

Tohatchi will take on No. 6 Las Vegas Robertson on Wednesday at 5 p.m. at Bernalillo High School.

In the top of half of the 3A bracket, top-seeded Navajo Prep ran past district foe Thoreau with a 75-46 win.

The Eagles got off to a fast start as they scored the first 11 points.

Thoreau, however, calmed down and closed that deficit to 21-13 at the end of the first quarter.

A 22-point second period outburst by Navajo Prep changed the complexion of the game as opened up a 41-22 cushion at the break.

“We had a really good start,” Navajo Prep coach Rainy Crisp said. “We were hitting our shots and in the second quarter we kind of went in a slump, but we were able to get the momentum back.”

The Eagles rode that momentum in the second half to the tune of 34 points.

“Our coaches have been on us about our defense and we wanted to make that our priority,” said Navajo Prep senior TionTai Woods, who surpassed the 1,000-point mark earlier this season. “Our defense creates our offense, so we pressured them.”

The Eagles had four players in double figures with senior Hailey Martin leading the way with 19. Guards Cienna Harrison and Amber Garcia both finished with 13 and Aiona Johnson had 12.

“That’s been our downfall the entire season,” she said. “It’s taking us one or two quarters to get into the game and that was part of our talk at halftime. We can’t take one, two quarters to start playing because we end up digging ourselves into a hole.”

Nonetheless, she was elated that her team made the eight-team bracket as her club finished third in the district.

“It’s definitely an honor,” she said. “We have the toughest district and we play one of the best teams in the state and coming in our girls were willing to play them.”

Thoreau finished the season at 8-5 overall as they will lose four players to graduation.

Navajo Prep, meanwhile, improves to 12-0 and on Wednesday they will play No. 4 seed Hatch Valley at Bernalillo High School. Tipoff is scheduled for 2 p.m.

In the 3A bracket, Navajo Prep freshman Jude Thomas scored five straight points to help the Eagles to a 48-47 win over New Mexico Military Institute in a 3-6 matchup.

“It was a wild one for sure,” Navajo Prep coach Matt Melvin said. “It was just back and forth and it was kind of like slugfest game with a ton of emotions.”

The second-year coach said Thomas was clutch in the closing minutes of the game after having a shaky start.

“He hit our last two shots,” Melvin said of his pupil. “His first one put us down one and his second one put us ahead. I’m still trying to wrap my head around that because for three quarters he didn’t play as well.”

Thomas finished the contest with eight, as Navajo Prep was led by senior Javy Atcitty as he scored 14 points while Isaiah Morris added 11.

In the 2A boys, Rehoboth defeated No. 8 seed Monte Del Sol Charter in a low scoring contest, with the Lynx coming out on top with a 45-32 win.

“We did a phenomenal job on the defensive end,” Rehoboth coach Kevin Zwiers said while noting that their opponent had some really good shooters.

By his count, Zwiers said his club finished with 25 boards, including nine by senior post Jake Zylstra.

The Lynx will take on No. 4 Mescalero Apache at St. Pius X High School in Albuquerque on Wednesday at 6 p.m.