‘If you can help someone else with their goals and dreams, you should’ 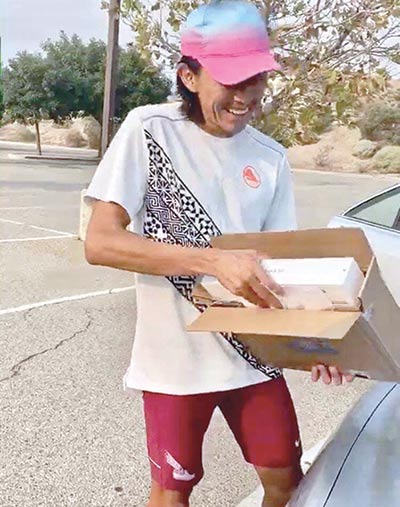 Inside was a brand-new MacBook Air laptop, a device he desperately needed in his final year of college, sent to him by marathon runner Cheryl Iseberg.

Hardy has run for Chinle High, Central Arizona College and now the University of Antelope Valley, where he is studying criminology and public safety.

Throughout his running career, he has collected many awards and honors. In 2015-16, he was Arizona Division 3 state individual champion.

He also finished first in the 2017 Shiprock Marathon. In 2018 he participated in the NJCAA team national championship, and in 2019 he reached All-America status for the NAIA in cross-country.

“Distance running for me is a blessing,” Hardy said, “Because when we get up and run in the morning … it’s a blessing to wake up every day and enjoy life in the morning, feeling like the little aches and pains in the body get left behind through constant breathing.”

All the while, he has managed to get high marks in his classes.

However, he hit a bump when his old laptop started to lag behind. When he tried typing essays, the device would pause for five seconds before the text would appear, severely slowing him down.

This past summer, Hardy braved the pandemic and returned home to be with family. In that time, he volunteered to help Wings of America virtually train young athletes. But with his computer causing trouble, he went to his old friend and coach, Shaun Martin, current athletic director at Chinle High, and borrowed his spare laptop for the summer.

“I’ve known him since he was a little freshman,” Martin said, “and was able to help and watch him grow into the state champ he became in high school and now the outstanding collegiate runner and the student-athlete he is now.”

Martin was happy to help but was concerned when Hardy returned to college with a dysfunctional laptop. He decided to do something about it.

Martin is also the organizer for the Canyon de Chelly Ultra Marathon and in the past had asked the generous running community to help with donations to various projects whenever they can.

Martin said the runners who come to the ultramarathon are usually helpful and supportive of the local community. One year, the group donated a large number of shoes to give to runners in the area. Another time Martin started a book drive, and the day before the race, there were “wheelbarrows of books” given away.

Also, runners would purchase artwork and jewelry made by local vendors, allowing the artists and craftsmen to continue working.

This year, with the race canceled, some runners asked Martin if it was still possible for them to purchase items from these vendors.

Another tradition that came about from the race is for a runner to adopt a stray rez dog and provide it a new home. One such dog that used to run around the canyon is now eating table scraps at his new home in Paris, France.

With this year’s race canceled because of the COVID-19 pandemic, Martin instead hosted a virtual race, the Hashké (Warrior) Run, in October. The night before the race, Martin put up a video on Facebook to address all the runners who would be participating worldwide, some as far away as South Korea.

In the video, he held a ceremonial blessing and shared the importance of running in the Navajo culture. Before closing the video, he asked for donations to help purchase a new laptop for his friend, Santiago Hardy.

Martin hoped to get some help, but he wasn’t expecting a brand-new laptop provided by Cheryl Iseberg.

“We were just blown away with her kindness and her willingness to jump aboard with what we were doing here and support Native runners,” Martin said.

Iseberg is owner of a software consulting company and is an athlete herself since she was young. Originally from Tacoma, Washington, she travels between there and her home in Lahaina on Maui, Hawaii.

“I have been involved in sports all my life,” Iseberg said. “I am not a fast runner or a talented runner.

“I have multiple sclerosis,” she said, “which makes things a bit harder to be an athlete. I think athletics teaches us valuable lessons like being part of a team, how to deal with failure, and achieve your dreams.”

Iseberg has run in at least 23 Ironman races before switching to marathon races.

“Running, especially running on trails and ultra-running, has a way to heal the soul like no other sport,” Iseberg said.

In 2019, Iseberg watched the film “3100 Run and Become,” which featured Martin, who shared the importance of running to Navajos and the sacredness of Canyon de Chelly.

Interested in the canyon and Martin’s running philosphy, she looked up the race and put her name in the drawing.

However, she was not selected for that year’s ultra run. Despite this, she and her husband visited Canyon de Chelly and camped there for three days.

“I fell in love with the canyon, the stories, the spirits, and the people,” Iseberg said. “I believe in spiritual places and the people who once lived in these places. Much like the canyon, living near the West Maui Mountains has the same spiritual feeling.”

This year, she was saddened to hear of the ultra marathon being canceled, but she signed up for the virtual race. The night before the run, she heard of Hardy’s plight.

“When Shaun said he hoped to raise enough to cover the expense, I immediately wanted to help this young man and purchase it (the laptop) for him,” Iseberg said. “I believe if you can help someone else with their goals and dreams, you should.”

The package was first sent to Martin, who then sent it to Hardy’s cross-country coach, Clay Mayes, who filmed and photographed Hardy opening the package. Hardy’s excited reaction was later posted on Facebook.

“The video when they have him opening the laptop was priceless,” Iseberg said. “I am glad I could do something for him, and I look forward to seeing him succeed.

“He reached out to me via email and was very kind and thankful,” she said. Indeed, Hardy said that the laptop was a valuable asset to him, mostly since most of his classes have switched to online learning this year. The COVID pandemic had canceled many of his cross-country races, but he is hopeful that he and his team will be able to run at least once this season.

Despite that, he said COVID did one thing for him: It allowed him time to concentrate on school, and his new laptop helped immensely.

“So I focused a lot on my schoolwork and pretty much came out with straight A’s, which I never had academically, not even in high school,” Hardy chuckled. “It was always close.”

Martin, who is friends with Hardy’s cross-country coach, Mayes, was pleased by how far Hardy has come.

Hardy isn’t certain what he will do once he graduates next year. He definitely wants to return to Chinle. From there, he thinks he’ll try to get a job in law enforcement, or with how good his running has been, he might reach out and try to find a sponsor so he can run full time.

“Either working or running,” he said, “or I can do both.”

Martin is looking forward to next year, saying that he is grateful and overwhelmed by others’ generosity.

“It was just outstanding to have people participate in this event who are truly just good people wanting to put good in the world and do good things for others and help others reach their goal,” Martin said.

As for Iseberg, although she has returned to Hawaii, she is looking forward to revisiting the Navajo Nation soon.

“I am looking forward to returning to Canyon de Chelly in October of 2021 for the ultra-marathon,” Iseberg said. “For me, being part of the Canyon de Chelly race is very similar to how I felt when I went to Kona – it was a spiritual experience and one I will never forget.”

Iseberg’s final words to Hardy: “Much aloha (Hawaiian for love and peace) to Santiago. I think his future looks very bright.”