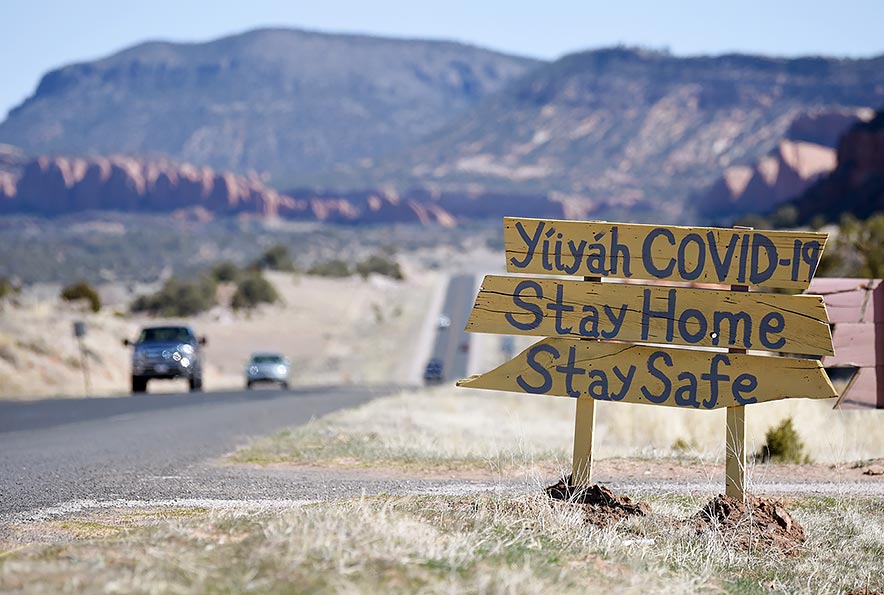 Navajo Times | File
A homemade sign urges people to "Stay home" and "Stay safe." But 2020 is not the first disastrous year the Navajo people have faced.

If you’re a resident of Earth, we don’t have to tell you what the biggest story of the year was. A tiny microorganism upended the health and economy of an entire planet. It’s easily the biggest story not only of 2020 but of the century.

But it was far from the only big story of this watershed year. There was an exceedingly strange presidential election; there was a Census; there was a huge dump of federal money on the Navajo Nation with a crazily short spending deadline, like some sort of high-stakes shopping spree game show — and like a game show with an unexpected twist, the deadline was suddenly extended after all the money had been allocated.

A farm board president in Shiprock covered much of northern Navajo with hemp fields that may have included some marijuana headed for the black market. Smokestacks toppled at the Navajo Generating Station in Arizona, while in New Mexico, the tribe’s own energy company increased its interest in another coal-fired power plant.

After a years-long informal moratorium on capital punishment, a Navajo man was among a rash of federal executions. The virus affected or was affected by all these stories as well. But even without it, 2020 would have been one for the history books. Those of us who lived to tell about it will be doing so for a long time to come.

Here, in reverse order a la David Letterman, are the Navajo Times staff’s picks for our most important stories of the year.

10. NTEC expands interest in Four Corners Power Plant — The Navajo Transitional Energy Company, created by the tribe in 2013 to secure the Navajo Nation’s interest in energy production while simultaneously transitioning to a clean energy portfolio, once again seemed stuck in the coal bog even while the big energy producers were beating a hasty retreat from fossil fuels. NTEC picked up PNM’s 13% interest in the Four Corners plant, which is fed by coal from the Navajo Mine, also owned by NTEC. This gives the company a 20% interest in the plant, which the major owner, Arizona Public Service Co., wants to shutter in 2031. The deal included a $75 million cash infusion to NTEC to keep the plant running.

9. Drought continues — The Nation, along with the rest of the Southwest, remained in the clutches of the second-worst drought in a millennium of climate observation. Ranchers were forced to sell off their sheep and cattle as stock ponds dried up and windmills, many of them neglected for years, stopped pumping. Smoke from more than a dozen giant wildfires in Arizona, California and Colorado made for some unpleasant days and spectacular sunsets throughout the summer, but thankfully the reservation was spared … this time.

8. Lezmond Mitchell execution — On Aug. 26, Lezmond Mitchell became the first Native American executed by the federal government for a crime committed against a member of his own tribe on tribal lands. The action provoked lively debate within the Navajo Nation, with President Jonathan Nez and many other Navajos arguing that the death penalty is not part of Navajo tradition and the U.S. government had violated the tribe’s sovereignty, while others felt Mitchell’s crime — the brutal murder of a 9-year-old girl and her grandmother in 2001 — warranted the ultimate sacrifice.

7. Domestic violence programs go a year without funds — The seven domestic violence programs in and around the Navajo Nation are used to their federal grants getting tied up in tribal red tape and have learned some workarounds. But this year the Navajo Nation controller and Division of Social Services threw some new requirements at them after they already thought they had their annual contracts. The programs, already overworked and understaffed, went an entire year without the money that provides the backbone of their budgets — while trying to keep their staff and clients safe from COVID-19. Fortunately a coalition of Navajo women activists put on a series of fundraising events that kept the shelters’ doors open until the money came through, and the shelters were able to convince the division to award them multi-year contracts in the future so this doesn’t happen again.

6. 2020 U.S. Census — As with everything else, the pandemic interfered with the decennial count of every American. The Navajo Nation’s response rate is always low due to the rural nature of the reservation and lack of phone or internet connections, but with Census takers having to resort to safety measures like leaving the forms on people’s doorsteps, it took another hit. When U.S. Census Bureau Director Steven Dillingham unexpectedly announced field data collection would conclude Sept. 30 — a month earlier than the previous deadline — the Navajo Nation joined a lawsuit that alleged the cutoff would result in a huge undercount of people of color. Eventually the deadline was moved back to Oct. 15, and with some innovative measures — like bringing Census takers to the COVID-19 food distributions — Navajo authorities are confident the vast majority of tribal members were counted.

5. Navajo Generating Station decommissioned — On Dec. 18, the iconic triple smokestacks of the Navajo Generating Station came crashing down in a huge cloud of dust. The demolition was just one stage in the plant’s ongoing decommissioning, but for many, the symbolic alteration of the skyline brought a variety of emotions. Some Navajos who had lived near and worked at the plant shed a tear or two as they recalled good jobs and good times with co-workers, while environmentalists near and far were glad to see the end of another coal-fired plant. The plant was closed last fall when coal became too expensive to compete with natural gas and solar power production. The tribe is still working on how to replace the lease and mineral revenue, not to mention the hundreds of well paying jobs associated with the plant and the Kayenta Coal Mine that supplied it.

4. Shiprock hemp farms — Frantic calls began coming in to the Navajo Times office this spring, with residents of the Shiprock area complaining that San Juan Farm Board President Dineh Benally was planting what appeared to be marijuana on hundreds of acres of farmland in northern Navajo. Benally insisted the crop was non-psychoactive hemp, but even that is illegal on the Navajo Nation, other than at a specially permitted experimental plot at the Navajo Agricultural Products Industries. Ignoring repeated warnings by tribal authorities, Benally kept growing, drawing complaints from his neighbors about the skunk-like stench of the plants, increased traffic and trash, and a large influx of Asian workers living in trailers on the land. In November, while Benally was still harvesting his crop, a coalition of state, federal and tribal officers raided the compound and gathered evidence. The case is still under investigation.

3. 2020 Election — Against the backdrop of a worldwide pandemic, one of the strangest elections in U.S. history unfolded. Along with the rest of the country, Navajos were glued to their televisions or computers while the results trickled in and incumbent President Donald Trump continued to insist that unless he won, the election was rigged. The coronavirus became a spiky political football as right-wingers insisted it had been overblown and mocked liberals for wearing masks. The divisiveness went clear to the top of Navajo Nation leadership as President Jonathan Nez backed Democrat Joe Biden while Vice President Myron Lizer chose Trump, complete with both men appearing in their respective parties’ virtual conventions. The two men seem to have managed to remain friends and co-workers, but Lizer’s name was conspicuously absent from a press release congratulating Biden on his win. The Navajo vote proved key in the precarious swing state of Arizona, where Biden won with fewer than 10,500 votes, turning the state blue for the first time since Bill Clinton carried it in 1996. Nez cast one of the state’s 11 Electoral College votes. One of Biden’s first acts as president-elect was to appoint a Native American, Deb Haaland, to the post of Secretary of the Interior.

2. CARES Act funds — There’s not much good to be said about the coronavirus pandemic, but it did bring the Navajo Nation its largest single federal cash infusion in history: $714 million from the Coronavirus Aid, Relief and Economic Security Act. Unfortunately, the dollars got tied up in a lawsuit over whether Alaska Native corporations could share in the wealth, and the millions didn’t arrive on the Nation until June — with a spending deadline of Dec. 30. The president and Navajo Nation Council wrangled over how to use the funds, finally coming up with a plan that any dollars the chapters and tribal programs couldn’t spend by mid-November would be put into a “hardship fund” for individual Navajos. However, confusion over the spending deadline and technical glitches with the registration website for the hardship allowance left the executive and legislative branches bitterly divided and Diné families frustrated as the holidays approached with no hardship check. On the bright side, as of Dec. 28 the Navajo Tribal Utility Authority was able to hook up more than 583 homes to the electrical grid as well as complete 101 cistern systems and 99 septic systems, and place 40 free Wi-Fi hotspots around the Nation for students. The tribe also purchased $28 million worth of long-shelf-life food and other pandemic-related supplies for the chapters. Last week, Congress extended the spending deadline for the funds, but it remains to be seen how this will affect projects on the Nation.

1. The coronavirus pandemic As the first COVID-19 cases popped up in the U.S., rapidly decimating the East and West coasts, it at first appeared the Navajo Nation’s remoteness might protect it. But a super-spreader event in Chilchinbeto in March jump-started the contagion until, by June, the Nation was the hotspot of the entire country. President Nez implemented one of the strictest lockdowns in the country, and it seemed to be working. In early September, the Nation went three days without logging a single new case. Unfortunately, with some schools starting in-person and then the Thanksgiving holiday, the virus roared back with a vengeance, and daily new cases rapidly eclipsed the previous record of 240 on May 14. On the bright side, help poured in from around the world as international media exposed a land neglected by the federal government for far too long. Local heroes also emerged: former Navajo Nation Attorney General Ethel Branch organized a relief effort that raised millions while “water warrior” Zoel Zhonnie and his crew of volunteers raced to get clean water to the hardest hit. Hundreds more mobilized in their own chapters. The first 3,900 doses of vaccine arrived on the Nation Dec. 14, spawning hope that, at long last, eradication of the deadly pandemic was within reach.