Brush dams save home from flood, pile up soil 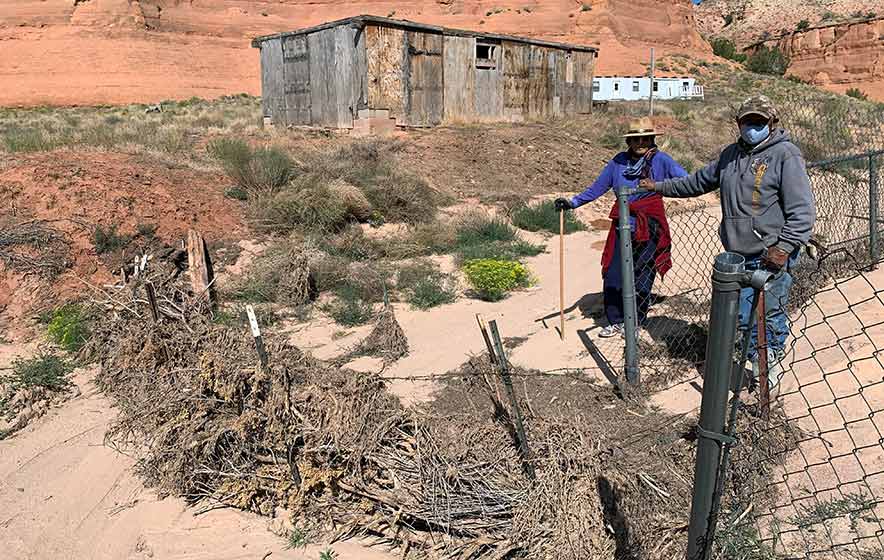 Navajo Times | Cindy Yurth
Joan Delgai and Ernest Begay stand by one of the brush dams they created by weaving brush and branches into fencing wire strung across a wash.

During the three years since she and her mentor, Ernest Begay, began building a network of rock and brush dams on her ranch in Cornfields, Joan Delgai has saved thousands of tons of soil. But this year, she credits the dams with saving her and her neighbor’s houses from a flood. Most of us think of this past summer as one of the driest on record, and it was … but when it rained, it poured, at least in some parts of the rez.

On the evening of July 27, Delgai was getting more and more nervous as all the washes on her land, in a cove of rock that runs off into the plain below, filled up and overflowed.

The water went over some of the little homemade dams, under or around others, and even bent the T-posts in the spots she and Begay had neglected to anchor them to rocks or a stake pounded into the ground. The water was getting perilously close to the home she had built when she first moved back to the reservation.

Begay sought to reassure his friend. “I said, ‘The Holy People have watched you build all these things, and now they’re saying, ‘Hey, this lady has done all these things. We’re going to test them,’” he recalled. “’Don’t be afraid; it’s a blessing.’” Nevertheless he hurried over with the only material at hand, a stack of empty dog food bags.

They filled them with sand and built a levy. The strategy worked, and when the two surveyed the damage the next day, they were surprised at how little it was. Although most of the dams had suffered a breach or been eroded around the sides, they had still backed up tons of soil, much of it laced with good organic material from atop the mesas behind the house.

Over the next few months, grass, brush and even Siberian elm trees sprouted in the moist soil, and when this reporter visited the property Saturday, it was a festival of pale purple asters, yellow rabbitbrush and red-orange Indian paintbrush.

T-posts that were five or six feet long were buried up to a few inches, and rows of rocks Delgai and Begay had placed across the smaller washes were completely covered by dirt. The two elders — Delgai, Kin Yaa’áanii, is 74 and Begay, Tábaahá, is 68 — proudly gave a tour of their projects, with names like “Joan’s Delight,” “Rosa” (after Hurricane Rosa), and “Crocodile” (for a rock formation directly above it).

Over the years, and particularly after the one big rain of the summer, the 150 or so dams of rock, brush and fence wire have transformed the washes into a series of terraces where plants have started to take root. “It’s like the locks in the Panama Canal,” explained Begay.

He estimates each dam has saved about 50 tons of soil from washing onto Navajo Route 15 below. The total cost of the projects is only a few hundred dollars.

They’ve been built mostly with branches, tumbleweeds, rocks and other things Delgai has in vast supply on her tract. T-posts, fencing wire and railroad ties were mostly purchased at flea markets. “If I’m driving around and I see a stack of branches on somebody’s property, I knock on their door and say, ‘Hey, I can clean that up for you,’” said Begay.

“Then I bring it back here.” He also has about 4,000 projects on his own land, he said, some of which were built by his father when he was in the Civilian Conservation Corps back in the 1930s. “Each dam you build is like having money in the bank,” he noted. “The soil is like the interest.” “It seems like since we started, Mother Nature is really helping,” added Delgai. “That’s where all these new trees are coming from.”

The two would love to share their success with others and are working on putting together a scrapbook and a presentation they can give at schools or chapters. They have started on a few projects outside Delgai’s fence so people can park along the road and walk up to observe them.

“We’re going to put up a sign so people know where they are, but I hope they don’t try to drive to them and cause more erosion,” said Begay. “It’s my hope and dream that it will take off,” said Delgai. “If everyone starts doing this on their land, it will be wonderful.”