Chinle youth work to save elderly from floods 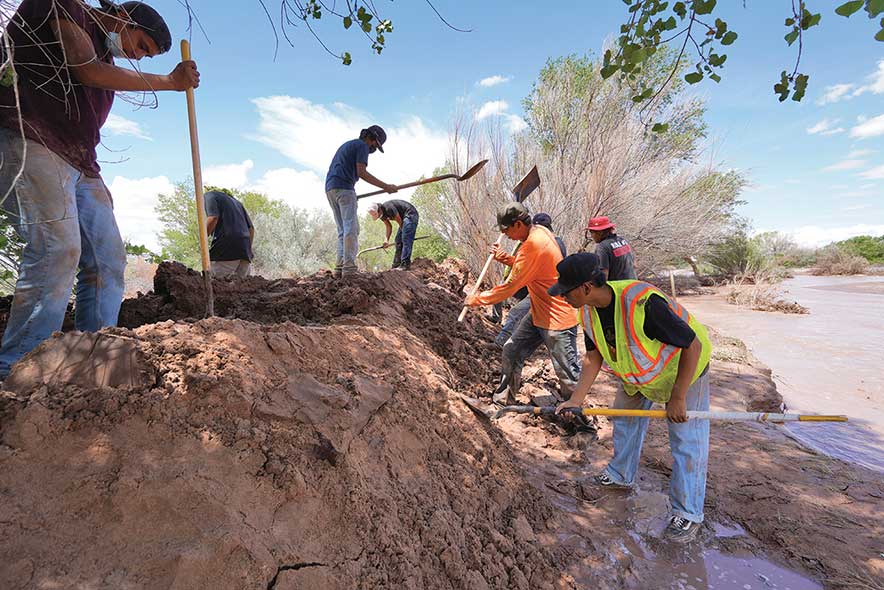 Navajo Times | Donovan Quintero
Youth workers from Chinle Chapter and AmeriCorps work on building a wash berm designed to keep floods away from homes on Saturday in Chinle.

Armed with shovels and a desire to keep their community safe, youth working for the Chinle Chapter and AmeriCorps went to the front lines on July 30.

Their mission: Protect elderly living along the Chinle Wash from the flood of water caused by the monsoon rains.

She said the youth take on any project given to them.

“They go on every project without no questions asked,” she said. “They’re motivated, and they’ll jump into anything and get it done.”

That’s what they did, said Jumbo-Fitch.

Monsoon rains in the Chuska Mountains brought much-needed precipitation to the Chinle area on Friday.

But the relief threatened to flood homes along the Chinle Wash despite the construction in February of a nearly two-mile long wash berm.

Road crews from the Mexican Springs Chapter and the Bureau of Indian Affairs created a temporary path around the area damaged by the flood.

The monsoon rains created many natural ponds of water for livestock and wildlife to drink.

In Chinle on Saturday, Jumbo-Fitch and her crew of young workers were at the Chinle Wash, about a mile north of Denny’s. She said elderly living along the wash prompted the young crew to jump into action.

The wash berm built in February was constructed to protect homes from flash floods. The wash berm stretches for nearly two miles on the west side of the wash, said Jumbo-Fitch.

Heavy rainfall between July 26 and July 29 caused floods north of where the berm ended.

Jumbo-Fitch said about another half a mile of wash berm was needed.

Floods aren’t new to residents living between Chinle and Many Farms.

In February 2019, floods in Chinle Wash damaged many homes along the wash. Chinle officials and AmeriCorps volunteers filled sandbags and helped evacuations,
But sandbags they placed were removed by farmers who accused the volunteers of interfering with irrigation rights, according to a 2019 Navajo Times article.

A sign with bullet holes warning residents not to damage the berm or face criminal charges was posted near the constructed wash berm.

In 2015, according to the president’s office under Russell Begaye, a woman in her vehicle was swept away while attempting to cross a flash flood, and her body was recovered.

In 1964, according to a research paper titled, “Floodplain Analysis for the Garcia Trading Post area in Canyon de Chelly National Monument,” a flash flood originating from Nazlini Wash and Chinle Wash combined and destroyed a bridge, killing seven people.

The study added water from the Chuska Mountains is held back by the Tsaile Dam and Wheatfields Dam about 25 miles to the east.

The paper cited Highway 7 and a groundwater pumping facility encroached on the floodplain west of the canyon’s mouth, contributing to flash floods.

On Saturday, Nazlini Wash, which is not generally filled with water, had a steady flow that ran north toward Chinle.

“They’ve been maintaining this all week because the water has been eating into it,” said Jumbo-Fitch as she explained what the flooding was doing to the wash berm.

“You’ll see it at Holiday Inn,” she said, “where the water just came through that irrigation canal. Now we’re trying to be proactive because right now the sun’s out, and it’s supposed to rain again.”

To the east in Sanostee, New Mexico, Delegate Amber Crotty said officials allowed residents displaced by downpours to stay in the chapter.

She said more than 100 families were given water while Navajo fire officials and the Sanostee Community Emergency Response Team, or CERT, helped motorists who were trapped in flooded areas.

On July 29, Sanostee Chapter declared an emergency. It urged residents to stay home unless necessary when roads in the community were flooded or covered with water. Sandbags were made available.

Students returned to school on Monday with school buses running “mud routes,” which require students to be picked up and dropped off only at main roads.

On Saturday afternoon, Chinle Chapter youth employees Forrest Yazzie, 16, Oralbo Bia, 16, and Amare Tabaha, 17, after a long day of adding to the wash berm, tiredly made their way to their vehicle.

The three teens were caked in mud, and Yazzie’s sneakers were torn from tamping down the berm all day. They didn’t say much.

They had completed their mission and saved elderly residents and their homes from floods.

Before their workday concluded, Yazzie, Bia, Tabaha, and their coworkers sat under a tree. For most of them, school started on Monday.

“It’s going to go a long way,” Cy Salloway, who is with AmeriCorps, said of the wash berm.

And for youth in other parts of the reservation, the group collectively offered this advice: Get up and put in some work, help one another.

For Jumbo-Fitch, she said she couldn’t be happier with her kids, who’ve been tirelessly and selflessly working to ensure their community was safe from the floods.

“They’ve been working on it (wash berm) for two nights now on this particular section,” she said. “And then on Monday, Tuesday, Wednesday, they’ve been doing repairs.

“And then they’ve also been going out in the community, to those that have been having flooding near their homes,” she said. “They’ve been delivering sandbags.

“All week, ever since it started raining on Tuesday, they’ve been out handling what they can as far as flooding, mitigation,” she said.