Diné voters choose change, or those who hold same beliefs 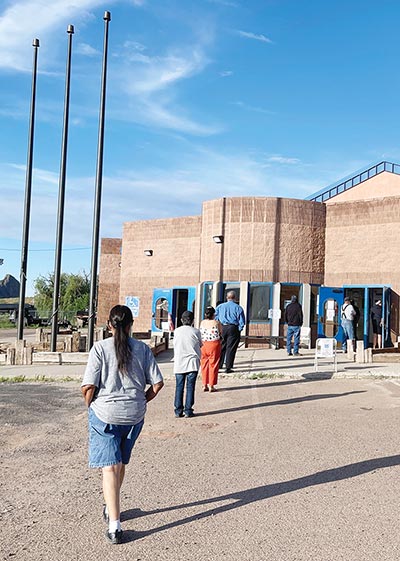 Navajo Times | Jalen Woody
Voters wait in line Tuesday morning at the Fort Defiance Chapter to cast their votes in the Primary Election.

There were many people coming in and out of the St. Michaels, Fort Defiance and Lupton chapters throughout the day.

While they all had different reasons for voting for the candidate of their choice, some disclosed their reasons and all agreed on two things: change and candidates who held the same beliefs as them.

Fernando Notah, 69, who was voting at St. Michaels, voted for Jonathan Nez due to the president having knowledge and experience with agricultural and natural resources programs.

Notah works with these programs and said Nez is more receptive to them.

“I’ve talked to other candidates and they have not stated their definite plans about dealing with a lot of issues (with the programs previously mentioned),” Notah said. “They just like to beat around the bush and talk, so I know President Nez can address the issues more.”

Rachael Eldridge, 25, who voted at Tsaile/Wheatfields, voted for Ethel Branch.

Much like Notah, she chose Branch because the candidate held the same beliefs as her.

She said she believes Branch has the ability to bring the Navajo Nation “up with the times.”

She also appreciated Branch speaking out about the climate crisis due to Eldridge’s personal experience with it.

Eldridge was diagnosed with histoplasmosis, which is a lung fungus disease which she was exposed to while helping her family irrigate the soil at her family’s home in Wheatfields.

She said the disease only occurred due to global warming.

“It is the only the second case on the Navajo Nation but it is normally found in the Midwest,” she said. “So for me, personally, somebody who is aware of our climate crisis is key.”

However, Eldridge also said she voted for Branch due to the candidate’s economic policy and because she likes a woman being in charge.

She chose him because of his educational background.

According to Nygren’s campaign website, he has degrees in construction management, business administration, and organizational change and leadership.

“I think he’ll bring a lot of good to the community, bringing that kind of background this way,” Yazzie said. “Especially with technology coming into the field now and also into the offices and with the youngsters.”

He said he wanted someone new and he has seen Nygren campaigning a lot.

“Nez, he’s been here,” Laughlin said. “He was vice president and now he’s president. So something new, someone newer so that’s the reason why (Laughlin voted for Nygren).”

One voter from Lupton, who did not share his name, held the same beliefs as Laughlin and said he wanted new ideas and new people in the Navajo Nation government. He did not state who he voted for specifically.

“We need new people, younger ones, the younger generation in the community,” he said.