Giving thanks, giving back: Richardson delivers shoes for Native students 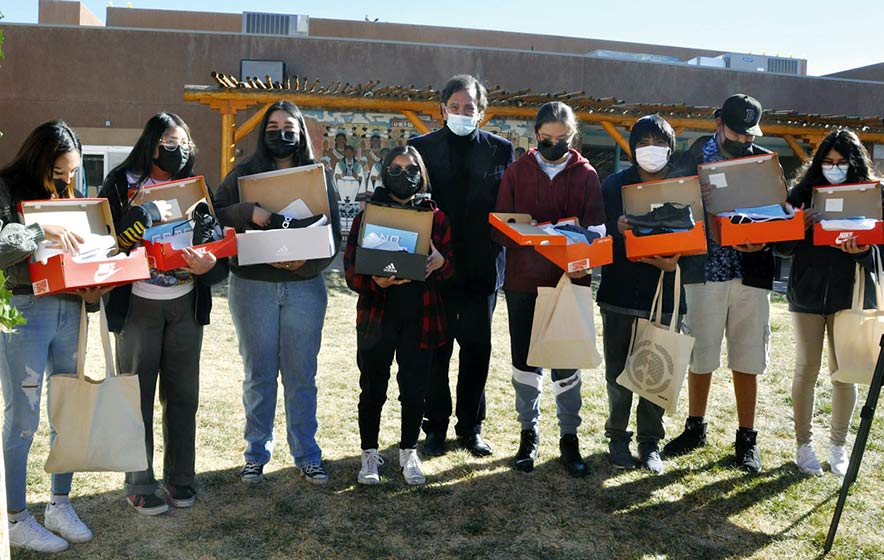 “All our fathers, at one time worked with Governor Richardson,” Hale said.

Chavez said, “He made meaningful relationships with my father, April Hale’s father, and a number of other leaders and he felt the need to give back to the first peoples of the United States.

“I think he has a true (desire) to help Native people in a mutual aid effort,” Chavez said.

Harris, the head of Americans for Indian Opportunity, is the daughter of the late former U.S. senator from Oklahoma, Fred Harris.

And Hale, owner of a public relations firm, A. Hale PR Inc., is the daughter of the late Navajo Nation President Albert Hale.

To mention some of Richardson’s work, during his tenure as New Mexico governor and serving in the U.S. Congress, he led efforts to protect tribal self-governance, religious freedom and water rights while supporting internet access for tribal families,

“He is a good friend to all our families,” April Hale said.

Richardson continued to express his friendship even after his time in office.

“You don’t see a lot of folks continue to give back, and continue and to foster a relationship (with tribes),” Chavez said.

In a 2016 interview, Richardson said that he has a lot for which to thank Native communities.

“When I was elected to Congress in 1982, I won by a narrow victory because of the Navajos,” he said.

As the COVID-19 pandemic broke out in 2020, he worked with community groups to get supplies like masks, gloves, medical kits, gowns, food and water quickly to Navajo and Hopi families through the Richardson/Zah COVID-19 Relief Fund.

Then last Friday, he turned his attention to youth, focusing on students attending the Native American Community Academy in Albuquerque.

Acknowledging the NACA students for their strength and endurance throughout the pandemic, he gifted them with 100 pairs of top-of-the-line athletic shoes.

Another 400 pairs will be given out to Native urban youth in January.

“I had the honor of delivering (these) special gifts to Native students who are the future of their people,” Richardson said in a statement. “It’s one way we can help them come back strong.”

April Hale, who was the MC for the event at the Indian Pueblo Cultural Center, said, “The NACA students were definitely happy to get new shoes. I talked to each of the students after they got their shoes and they were excited to show them off. It was a great day to celebrate our Native youth.”

The giveaway reminded Chavez of her own high school days.

“This stuck out for me because I played sports,” she said. “Coming from a family that couldn’t buy (expensive shoes), I would work a lot of odd jobs to buy my own shoes.

“It gave me a lot of confidence,” she said, “it made me feel good about myself. When I saw (Richardson’s effort), I really wanted to help.”

Thinking back to her high school days, she said, “I love the personal connection for me. It felt special to me to be able to hand these kids shoes they would be proud to wear at school.”

Twenty NACA students were on hand to accept the shoes. They offered thanks to Gov. Richardson, donors and leaders, followed by a Lakota song of gratitude by student Adriano Begay, according to a press release from Hale’s office.

Also supporting Richardson’s efforts, Hale said her company contributed to shoes that went to students at the Dream Diné School in Shiprock, and to urban youth in Albuquerque.

In addition, Americans for Indian Opportunity provided support for the Richardson’s shoe giveaway.

Taking a photo with Hale, Chavez and Harris, Richardson acknowledged the new generation of gifted leaders.

“It is these strong women here who are continuing the work of their parents,” he told Chavez.

On behalf of the NACA students, Zane Rosette, NACA’s executive director, said they were thankful for the gifts and appreciated leaders thinking of them.