‘Heart of a lion’: Diné to represent Arizona at Special Olympics USA Games 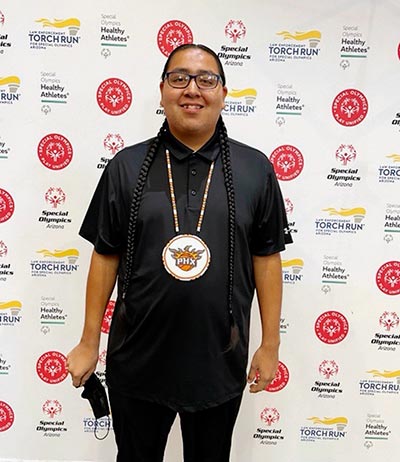 Submitted
Darnell Moore of Tucson was selected to compete on the Arizona Unified Basketball team. The team will represent Arizona at the Special Olympics USA Games in Florida next year.

Out of 55 participants, Darnell Moore of Tucson was selected for one of six open slots for the Arizona Unified Basketball team. The team will represent Arizona at the Special Olympics USA Games in Florida next year.

Darnell is 20 years old, has autism, and is part Navajo, part Akimel O’odham of the Pima, and part Shoshone-Bannock from Fort Hall, Idaho. His father Dennis Moore is from Názlíní, and his mother Racheal is from Fort Hall.

Darnell is a hardworking, fun-loving young man who was always interested in sports since he was young. He competes in bowling, tennis, and track and field, but basketball is his favorite.

“I like the competition, my teammates, making new friends, and meeting new coaches,” Darnell said. “I also like dribbling and shooting.”

He’s enrolled at Amphitheater High School and is in a job-training program with the University of Arizona, where he works on campus and gets hands-on experience. He enjoys working at the McKale Memorial Center where he works close to sports.

“Special Olympics opened him to communicating and working with people,” Racheal said. “He’s been involved with different sports, and he has had a lot of opportunities with Special Olympics.”

Darnell has been participating in Special Olympics for almost eight years. His participation earned him recognition and found friends.

Last year he was the AIA Unified Sports Athlete of the Year. He also made an appearance in a commercial for the Special Olympics as well. A few weeks ago, he got to meet Phoenix Suns player Devin Booker.

He also keeps in touch with his Native American roots by participating in powwows and playing the drums with his father, uncles, and grandfather.

Darnell was the first to hear about the opening on the Arizona Unified Basketball team and asked his parents if he could do it – a decision that they fully supported.

In July he met his coach, Mary Roberts, a retired police officer who has worked with Special Olympics as a basketball coach for years.

She remembers Darnell being shy when they first met in the summer. Now he greets her with a hug.

Roberts said she has a criterion when it comes to selecting players for the Unified team and Darnell checks all of them.

“It’s very important not only for fundamental skills, but you can see that they have the basics, and we just need to fine-tune them,” she said, “but what I look for is heart and attitude.

“And I’m telling you Darnell shined through with everything,” she said. “Heart, attitude, and basic fundamental skills, the young man can shoot the lights out.”

Roberts also stresses that the athletes on her team are the best in all of Arizona and that alone is an accomplishment. Her team becomes like a family and sometimes they go to schools and see special-needs kids, showing them that their dreams and accomplishments are possible.

Roberts gives credit to Darnell’s family for being supportive of their son.

Every Saturday the family will drive from Tucson to the center of Phoenix so that Darnell can make it to practice. The Moores’ youngest son Derek is also starting to play basketball and Darnell is helping him train.

“During practice, Darnell has a heart of a lion,” Roberts said. “He gets frustrated with himself, but you can see that he just let out a growl and I say, ‘Stay in it, Darnell, go hard and do this,’ and he listens.

“He tries so hard, and he accomplishes,” Roberts said.

Roberts said that the team would be playing like any other basketball game, with the same rules and regulations as any other team. To play without following the rules would be a disservice to her team.

The Moore’s love and are proud of their son for his accomplishments and for becoming a fine young man.

“He’s proud to represent the Native American community and all the tribes he’s affiliated with,” Dennis said. “I also want to thank everyone, friends, and family, for all the support over the years.

“Ever since he’s been in Special Olympics he had a lot of support,” Dennis added.

Darnell is looking forward to the USA Games this coming year, saying he feels nervous but excited. He hopes the team will win so that they can go to the world championships next.

Roberts is happy to work with Darnell, seeing he has made a lot of improvement since coming and having a positive effect on those around him.

“He gets out of his parents’ truck, runs to us, gives me a hug, and says he can’t wait to get on the court,” Roberts said. “He loves his teammates, and he is so proud, you can see it in his smile that melts your heart.

“He has come so far, and this is what Special Olympics is all about,” Roberts added, “you can see the pride in this young man, and I tell you, it’s working.”

The family has created a GoFundMe account on behalf of Darnell Moore and Special Olympics Arizona. To donate visit the website: https://www.classy.org/fundraiser/3626598.