With bleach and a prayer: In a tiny town, a clinic run by women holds the front line 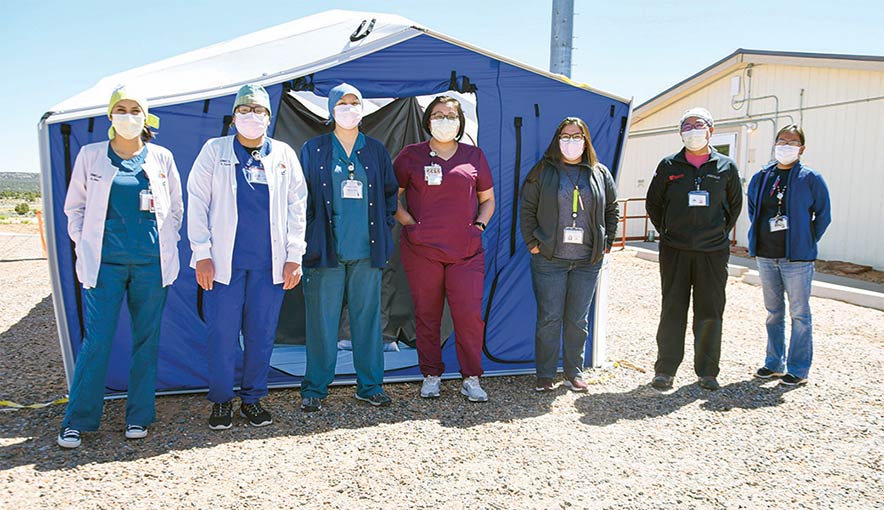 When Roxanna Yazzie gets home after a long workday, she changes her clothes outside the back door, an entryway organized like a hospital undressing area, because she cannot risk contaminating the house.

When she’s dressed in clean clothes, she enters the house and heads straight for the bathroom for a hot shower, careful not to touch anything but the door handles. When she’s clean, she embraces her children and settles down for the night.

It’s over. The workday is over. She yawns. But in just hours, the 31-year-old lab technician will leave her husband and her three young children – two boys and one girl – for another day of being watchful, helping people, and treating patients alongside her colleagues at the Navajo Mountain Community Health Center, all of whom are Diné women fighting in the battle against COVID-19.

One in three jobs held by women has been designated as essential, according to a New York Times analysis of Census data crossed with the federal government’s essential worker guidelines. In fact, nearly nine out of 10 nurses and nursing assistants, most respiratory therapists, a majority of pharmacists and a large majority of pharmacy aides and technicians are women. “We had only one male (Jason Duterte) here but then he (left for California to be near family),” Yazzie explained. “Now, it’s just us women here.

“When there’s stuff that is hard for us to do, we just all come in a group and ask one another, ‘Who knows how to do this?’” she said. “Most of us were raised here in Navajo Mountain. We all work together and fix it ourselves. “Especially when we have an emergency patient and we can’t lift that patient; we all work together to lift them up. And if we have a domestic violence, like if we can’t hold down a patient, we still have strength to work together. But we stabilize the patient pretty well.”

Yazzie said if their company vehicle breaks down or needs service, such as changing the oil or fixing a flat tire or replacing a part, they do it on their own.

“Some of us know a little bit about (automotive repairs), but we’ll put our heads together and fix it,” she said. If all else fails, one of the women will be delegated to take it to a service shop in Page, about 93.7 miles southwest of here – an hour-and-a-half drive.

Yazzie has eight colleagues, all of whom are capable of adapting to any and every position at the clinic in Naatsis’áán, with a population of less than 500 people. But each of the women has her own place at Navajo Mountain Community Health Center, one of nine clinics under the Utah Navajo Health System.

Like her colleagues, Roxanna knows the community, the region and its needs, She knows the people she serves by name.

“We have Nicole. She works at the front desk. She does medical and dental,” Roxanna said as she introduced each of her colleagues in detail. “Dental comes only on Monday and on Tuesday in Navajo Mountain, so she does both. She drives out from Inscription House every day.

Black is from Tódinéeshzhee’. She’s a licensed practical nurse, a title she recently earned. Roxanna and her colleagues a short time ago set aside time to have a celebratory luncheon for Black. The women came together to cook and celebrate her new title and long road to certification. Because of the COVID-19 pandemic, none of their families was able to join them for a cookout.

“Everybody was either in quarantine (or under stay-at-home orders),” Roxanna explained. “She (commutes) from Kayenta with our provider, Revina Talker, from Monument Valley.”

Talker is the clinic’s health care provider to not only Naatsis’áán residents but also to hundreds of patients across the region: from Page-Lake Powell and Tuba City to Kayenta and Monument Valley. She stepped up to be a provider when the New Yorker Duterte, better known as “Navajo Mountain man,” left after at least four years.

“She became the manager for the clinic also,” Roxanna added. “She’s also the provider in Monument Valley, which she covers on Fridays.”

Each of the women is influential and a soldier in a battle waged with bleach and a prayer. They have seen countless Diné patients, many of whom were infected with COVID-19, many of whom survived and some who died.

They are helping out at COVID-19 testing blitz events in Utah Navajo where they see more than 200 patients in one day. And they are the ones who inform a patient whose test comes back positive. “We still provide normal services, but we do it outside in a (triage) tent,” Roxanna said. “Before we go see the patient, we gown up and we’ll go into the tent to get their vitals and oxygen level and ask what they are being seen for.”

Because patients, including healthy individuals, aren’t allowed inside the clinic, the triage team communicates with the provider inside through a radio. Elders lost(sub) “We do get a lot of positive COVID-19 patients,” Roxanna said. “We did lose some elders in the community. That really hit us hard.” The loss of older women and men who died from the coronavirus is incalculable, said the women.

The virus hit Naatsis’áán with devastating force, killing elders and tearing through tight-knit families. One woman, a COVID survivor, lost her family to the virus, leaving her alone to take care of the livestock.

Roxanna, along with her colleagues, visits the woman regularly to check up on her. On one occasion, they found her worried about her future and grieving her family. On another occasion, the clinic team found her doing a lot better. When the Navajo Nation was hit by the coronavirus in March, the small Naatsis’áán clinic became one of the front lines where desperate patients visited, some sick, all of them afraid.

“When it first started, people really wanted to get seen, but we’re a really small clinic and we’re really rural,” Antonia Atene said. “A lot of (our people), they wanted to be seen and they wanted to be checked; to have their family members checked up on,” added Nicole Thompson, who is from Shonto, Arizona. “And it was very scary for a lot of the people in the community.”

At the beginning of the pandemic, Antonia, Roxanna, and their team had little choice but to soldier through the day with little rest. It was chaotic, but now it’s steady and they are seeing a lower demand for COVID testing. “People are pretty quarantined out here, even before the pandemic started,” Nicole said.

Medical workers like the women here have been celebrated around the world as heroes for their commitment to saving COVID-19 patients. But these heroes are hurting and sometimes they cannot control their anxiety. “It’s been restless, but I’m kind of used to it now,” Roxanna said. “It was crazy when this whole thing started. Sometimes I can’t even sleep at all because of what’s going on. I can’t really explain it because every day, (Talker) would ask, ‘How are you feeling? Are you feeling OK to go to work? No fever, no cough?’”

Sometimes I’ll say, ‘I can’t feel anything anymore,’” she said. “She would laugh and say, ‘Yeah, I understand.’”

Antonia said she also deals with anxiety because she has an 8-month-old son at home, and she needs to go home to take care of him. “I know (medical workers) are staying away from their families, but I still go home to be with my son. I take as much preventative measures as I can. I change before I go inside the house and I shower before I see him. I leave my (work) shoes in my truck and just (don’t) put them on until I’m going to work.

“You have to think about that every day. Of course, my chances are higher because I do see patients. So, I think of that before I go home to see my son.”

Nicole lives next door to her grandparents, both of whom are in their eighties. She helps her family take care of them and makes sure they eat well and get enough rest.

“That’s where I have to take precautions, for my grandparents,” Nicole said. “We’re only nine women in this clinic and we take care of a lot of people,” Antonia said. “All of us do more than one thing, so it’s kind of hard.” “We talk about it all the time,” Roxanna added. “We’re scared – we’re scared. Sometimes I’m scared to come home to my kids and my family. We’re all scared because we have kids at home and going home, we’re scared to be near them or hug them.”

UNHS allows its employees to get tested for COVID-19 whenever they need to, but some of the women have done it only once or twice because the test kits are needed for patients. The other women said they self-monitor for any virus symptoms.

The women see patients Monday through Friday, some of them needing a COVID nasal test, and then they have to make a trip to Blanding, Utah, to get samples processed in a timely manner because swabs can expire if they aren’t processed in time.

Roxanna often makes that daylong trip to Blanding on Fridays to get swabs processed at San Juan County’s Public Health Department. “I’ll return home sometimes late in the evening,” Roxanna said. “The past two months I’ve been doing that.” On her way home, she’ll meet up with relief groups, such as Pete Sands’ group, to get food to deliver to households in Naatsis’áán.

On weekends, some of the women take time out of their rest and family time to deliver food to local families. They also make house calls to families living down in Paiute Canyon, where some families don’t have transportation to travel for food and water.

“One of the elders told us to sit down, have coffee because she has not had any visitors (for months),” Roxanna said. “We didn’t go inside, we talked to her outside. She really liked it.” When the women make house calls, they say they always try to put a smile on the faces of families, which is priceless.

On a recent food distribution and house call trip, Roxanna and her team visited older folks’ homes to check in on them. She invited her husband and children because they wanted to know why she always came home late at night and was gone in the morning. The team found some elders needing a health check and found some needing human contact.