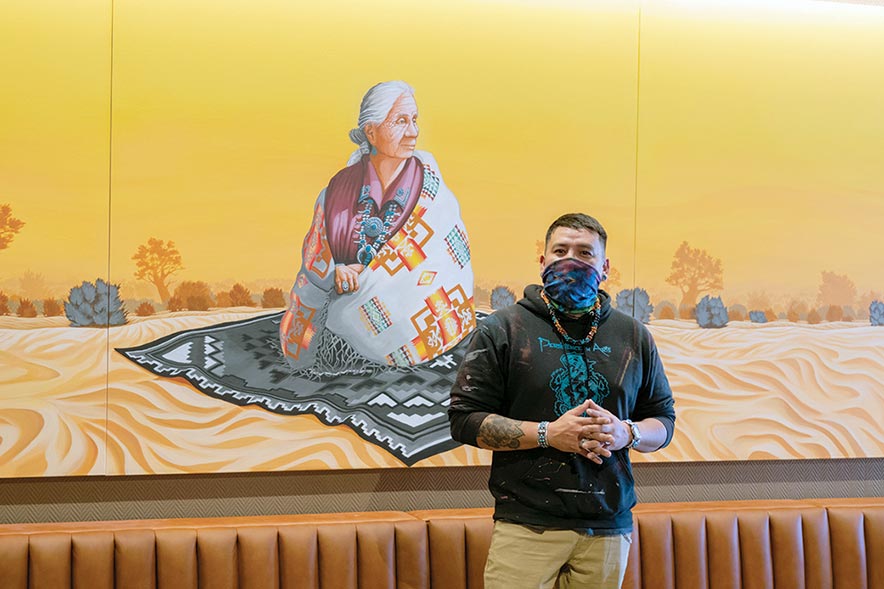 Special to the Times | Vanessa Tom
Daniel Josley stands in front of his mural titled “Grandmother of Direction” inside Starbucks located in northern Gallup on Nov. 30. It took Josley 14 days to complete the mural and Starbucks management is planning to commission him for future projects.

A group of 25 people gathered in the Starbucks located in north Gallup on Nov. 30 to celebrate the opening of the store and completion of Daniel Josley’s 54th mural titled “Grandmother of Direction.”

Gallup’s Starbucks is a part of the Community Store Program initiative that opens stores in low- to medium-income communities.

The Starbucks Community Store Program focuses on hiring locals, partnering with local nonprofits and working with diverse contractors and subcontractors.

The stores feature local artists and provide an in-store space for local events and programs.

Courtney Mains, with Starbucks public relations, said, “This store and dedication that happened last week is the first community store for Starbucks in New Mexico and the Navajo Nation.”

Starbucks has opened other community stores across the country for veterans and underserved communities and the Gallup location will be the first store with an emphasis on the Navajo community.

“It’s not just a Starbucks store,” said Mains, “it’s for the community, giving back to the community and employing the community. This store focuses on surveying the Navajo Nation.”

Josley, who’s originally from Shonto, Arizona, was contacted by Starbucks to paint a mural of a Diné elder with warm colors, showcasing the community of Gallup and the Navajo Nation.

“When I was contacted by Starbucks, I was really surprised,” Josley said. “They could have chosen anybody.

“There are a lot of inspiring artists around the community that are known for painting,” he said. “I guess my murals stood out to them. They really loved my colors and they wanted to go through with that.”

As the Starbucks staff laid down the details of a traditional Diné mural that they wanted, Josley got inspiration from his grandmother.

“Starbucks told me they wanted something of direction, something that is traditional, something looking forward, and an elder,” Josley said. “It all kept bringing me back to my grandmother.”

“And people would travel for hours to speak with her about it,” he explained. “So that was the whole reason I went with the idea of having my grandmother sitting on a Navajo rug, with a traditional Pendleton blanket, looking forward.”

The mural took 14 days for Josley to complete.

“During my stay in Gallup, I was working on two murals and had to travel to Phoenix for a demonstration at a school,” Josley said. “They were OK showing up wherever I wanted as long as I got it done before the date they gave me.

“After my grandfather passed away, I started this journey of painting,” he said, “Which led to murals, to meeting people of all walks of life. It’s been such a blessing.”
Josley’s late grandfather is John Wesley Josley.

“Everything I do starts by getting up and getting out there,” he said. “Expressing yourself on your time, not on anyone else’s time.

“I think it’s the hard times that really show how strong you are,” he said. “I am really appreciative of the struggles I have been through.

“My unique originals that were painted were made at a time I was broke, hungry and struggling,” he said. “Those were the times my original artwork really spoke out. I guess, in a way, it’s good to stay hungry.”

In the future Starbucks plans to have Josley paint inside stores located within the Navajo Nation.