Roller-skating for a cause: Victim specialist raises awareness of missing, murdered 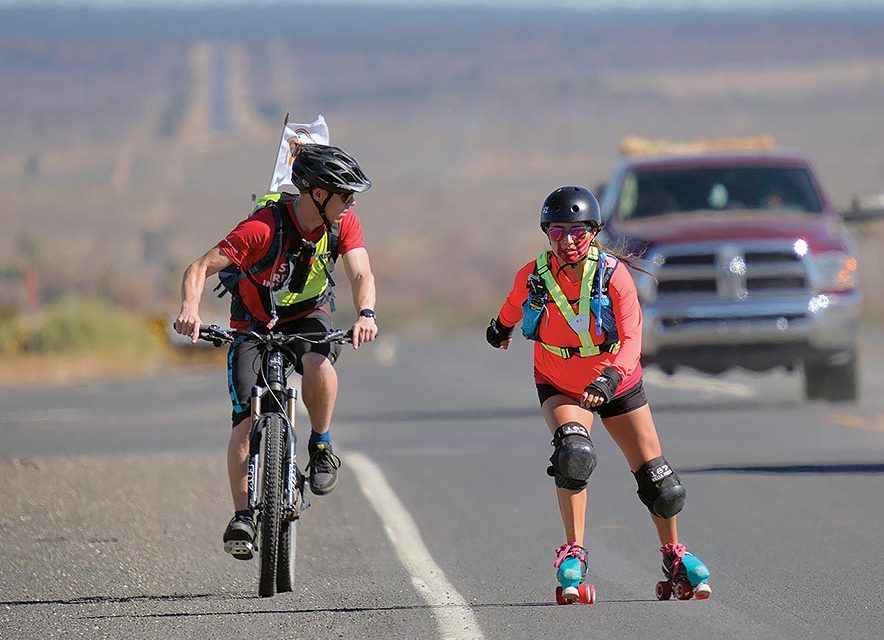 Early Saturday morning, Melissa Skeet, 33, started a journey to roller skate more than 300 miles across the Navajo Nation to raise awareness of the epidemic of Missing and Murdered Indigenous Women.

Skeet is roller-skating with her friend Daisy Purdy and her boyfriend.

She is Diné and is Rock Gap People Clan and Zuni Edge Water Clan.

She was born in Tuba City, raised at Grand Canyon National Park and currently lives at Yellowstone National Park.

She is also a former roller-derby athlete and when she stopped participating in the sport began trail skating because she did not want to stop.

“I just decided to go find some trail and skate and see how that goes,” Skeet said. “I just put on my headphones, got my dog and decided to skate. I was skating on some random trail just so you could feel your skates rolling with you.”

Soon after she began trail skating, she heard about Daisy Purdy, who skated more than 2,000 miles in the last year. Purdy was also Skeet’s peer advisor when she was an undergraduate at Northern Arizona University.

“Because of her, she kind of steered me in the right direction with what classes to take, my future career which I’m doing right now as a victim assistant,” Skeet said.

Skeet is a victim specialist, a job that consists of helping victims of crime in all national parks. She has been in this field for over 13 years and has noticed many things through that time regarding Indigenous people.

She said there is a lot of things going on with missing and murdered Indigenous women, children, two-spirit, and elders.

“Here within the criminal justice system, you kind of see the in-depth of what happens and how these cases just kind of disappear without any resolution or results to the case,” she said.

“I just had this passion to work with Indigenous families,” she said, “and I don’t necessarily work with them, but sometimes I do.” 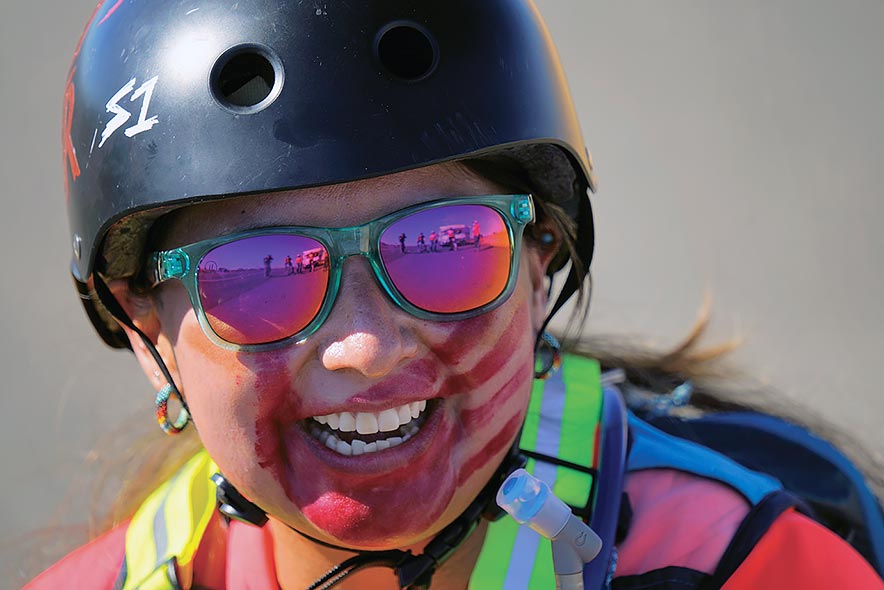 Navajo Times | Donovan Quintero
Melissa Skeet from Flagstaff smiles after making her way up a hill on skates Saturday east of Ganado.

She combined both of her passions of skating and wanting to help Indigenous families into trail skating with the goal of raising money for Indigenous organizations.

She began experimenting with this way of fundraising in July when 215 unmarked graves were discovered at the Kamloops Indian Residential School in Canada.

She partnered with the Legacy of Hope Foundation in Canada to raise donations for it while skating.

She asked them if she could raise donations while seeing if she could skate 60 miles in a day and they agreed. She reached almost $2,000 and skated 46.4 miles in one day for the foundation.
Soon after, she began planning for a week-long skating journey to raise awareness for MMIW.

“I know a lot of people have lost a family member or they never came home,” she said. “They still don’t know where they are, or they found that their family was murdered in the most awful and heinous ways that you can think of.

“It’s hard to actually see these families suffering though that,” she said, “and here comes a young, beautiful, white woman who was killed in the Grand Teton area.”

Gabby Petito was a white woman who was reported as missing in September and her remains were found a week later in the Grand Teton area. The case gained national attention from being broadcast by national news.

Skeet said she questioned why the Petito case was getting so much attention within a few days.

“The FBI was involved, all these other agencies were involved, like why aren’t these agencies giving voices to these other cases on the reservation?” she asked.

Skeet said she was struggling when she learned more about Petito’s case and felt bad for her family, but she continued to think about Indigenous families who do not get the same help and attention.

“I felt bad for her family,” she said, “but there are other families going through the exact thing they are going through, yet these families are not getting any justice, any resolution, or any notification about what is happening with their family members.” 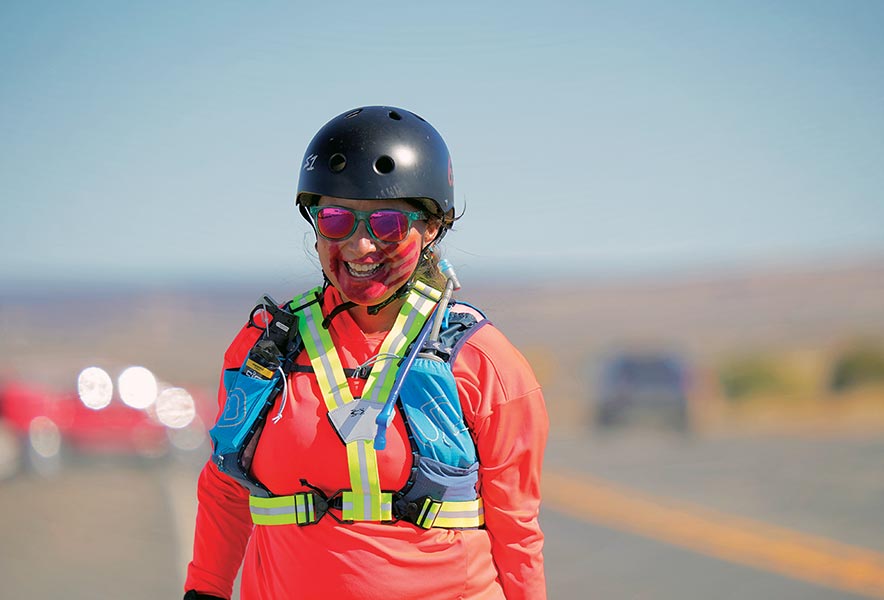 Navajo Times | Donovan Quintero
Melissa Skeet smiles as she makes it to an area where she can take a break after skating her way up a hill on Saturday east of Ganado.

With this thought and knowing skating would take a toll on her, it reinforced her to do a skate to bring awareness to MMIW.

Skeet described the burdens from having a cough due to her asthma to skating on rough roads, which resulted in a feeling like she was shaking even when she was standing still.

“I want the families to know I’m here,” she said. “I’m going to try to do what I can to raise this awareness for you guys because I know that you guys have been screaming and shouting to have your voices be heard.”

She was originally going to skate the trail of the Long Walk, however, her best friend advised her to do a different route because the trail has sacred land and burials sites of Diné. Due to this, she chose the route from Window Rock to Flagstaff and back again.

In Flagstaff, she said throughout the journey so far, she has been meeting many people who drive past her while she skates.

Sometimes they will stop and talk to her about what she is doing and where she is going.

She said she enjoys meeting people and talking to them because it pushes her to continue skating.

“There are times where I’m just like, ‘Oh, my god, my body hurts so bad, my feet hurt so bad,’” she said. “My lungs, you can tell from my voice right now, it’s just hurting like, oh, my god, what am I doing to myself?”

“Then meeting people,” she said, “they’re pushing me even more to do something great and not give up.”

She said many have thanked her for what she’s doing with bringing awareness to MMIW and she wants to continue to chat with as many people as possible.

She said at the end of day, it is not about the miles and is instead about bringing attention to the epidemic and the people she meets reminds her of that goal.

Skeet said her boyfriend and Purdy continue to remind her of the goal of awareness and encourage her along the way.

“They’re (Purdy and Skeet’s boyfriend) like, ‘I think right now it’s not about the miles, it’s about actually getting this awareness out and letting people know that you’re here and that you’re giving them a voice,’” she said.

She said she will be in the Flagstaff area on Thursday. On Friday she and her crew will be skating Route 77, then they will head back toward the Window Rock area on Saturday.

Skeet is raising donations for StrongHearts Native Helpline, Rollin’ for Rock Research, and Skate for a Voice! Crew.

The links to each donation can be found on her Instagram, @skeet_fighter.