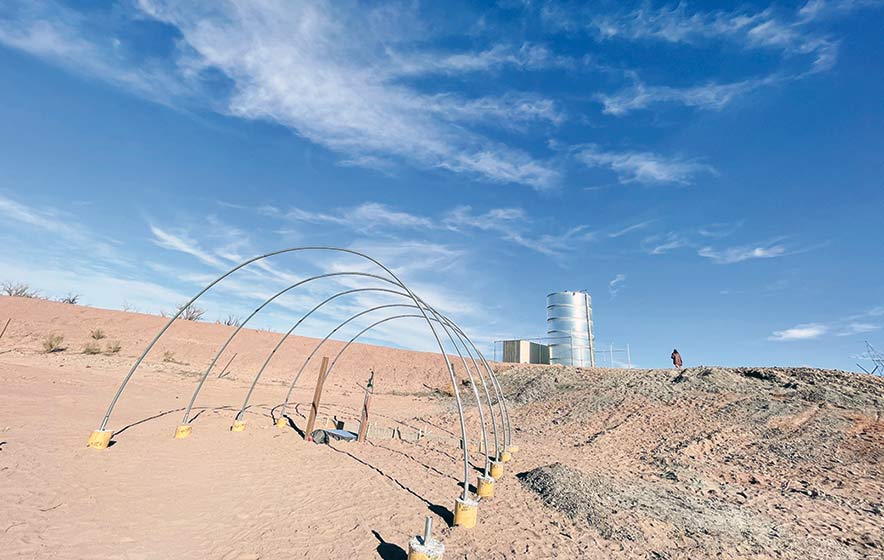 Special to the Times | Krista Allen
Cameron, Ariz., resident Mae Franklin, right, walks toward a 24,000-gallon water tank located at the Cameron Old Farm near the Little Colorado River. The farm is located on a grazing area her family once used. Franklin, who helped develop the farm, will help plant onions and other vegetables when the hoop house is completed.

The future rests on the soil beneath their feet.

On a warm Friday afternoon at the Cameron Old Farm, just a few people gather around the frame of a 100-by-16-foot hoop house construction project led by Tyrone Thompson, owner of Ch’ishie Farms in Tsiizizii, Arizona.

The Cameron Old Farm is comprised of a hoop house, a 24,000-gallon water tank, a solar water pump, a solar-powered water purification system and a one-acre garden – all of which can be found at the well site a few miles southeast of the Cameron Trading Post.

The well site is located within the grazing area that local Mae Franklin and her family once used. Food will be grown here, and water will be dispensed.

“So many community members had to drive 60 (to 80) miles round-trip in order to get water that they can use for their domestic needs,” said Stephanie Hall, the executive director for Tónehelį́į́h-based Tolani Lake Enterprises. “Now those community (members) have access to water, which is incredible.”

The Cameron Old Farm is just one of seven well sites underway in Western Navajo – one near Tsékǫ’ Haagééd, which is not completed, and six along Tółchííkooh between Tsiizizii and Na’ní’á Hasání.

A total of five have been completed since Tolani Lake Enterprises, or TLE, was awarded a $3.46 million grant on Dec. 8 through the Navajo Nation Department of Water Resources’ Coronavirus Aid, Relief and Economic Security Act budget.

The grant was awarded to TLE for its community-based water and food security projects in Western Navajo, the Former Bennett Freeze Area and the Navajo Partitioned Lands.

TLE in June 2020 began working with the Department of Water Resources, Navajo-Hopi Land Commission, and the Western Navajo Agency BIA to plan and implement a “Tolani Lake CARES Initiative.”

TLE was given only 22 days to projects which under normal circumstances would take up to a year to complete. TLE then asked the 24th Navajo Nation Council to extend the deadline from Dec. 30, 2020, to Dec. 30, 2021.

When TLE asked people for support letters to the Council, one letter that talked about Diné men and women leaving the Navajo Nation for school or work attracted attention. The letter, written by Black Falls, Arizona, resident Benson Willie on Jan. 12, also points out the new water tanks seen along Tółchííkooh and people stopping to take pictures because “it’s a realized dream.”

“They’re having a hard time internalizing the information,” Willie wrote. “Their eyes are trying to convince their brains. They’re trying to come to the realizations that we are to finally benefit from the water rushing down to Lake Mead that lets other people bathe twice a day when we have that benefit (only) once a week.”

He continued, “This CARES money (is) an opportunity for us to get water here at Black Falls to ensure our survival and our grandchildren’s survival in one of the most remote places on the (Navajo Nation).”

Thompson, who also manages North Leupp Family Farms, said the CARES funding is a dream come true for many people residing alongside Tółchííkooh.

“And it is built onto the capacity of what we’re able to do along the river,” Thompson said. “We have large plans of regenerative agriculture and having the capability to feed our own people, grow our own food, grow our own medicines –– we’re just extremely grateful and fortunate under that circumstance.”

Ch’ishie Farms’ Thompson and his team are not only constructing the hoop houses but also providing workshops on how to grow nutrient-dense vegetables year-round and how to grow salsa gardens during the summer. Other workshops include working with livestock and composting soil.

“We were able to construct six hoop houses in December, which is kind of unbelievable,” Thompson said. “But we pulled it off. Not only were they constructed but also planted and harvested and we were able to feed over 50 families. So, along with that, we butchered some sheep and distributed a lot of food boxes.”

TLE is still waiting for the green light from Council.

Working under an impractical deadline, TLE teams scrambled for supplies, equipment, and grappled with winter weather challenges in six weeks.

The initiative is made up of several projects, said Karen Malis-Clark, a volunteer spokesperson for TLE.

“Now we have people on the ground driving and delivering water to our most vulnerable community members – our elders – so they don’t have to go out into the border towns or other places that would put them at risk (for contracting the coronavirus) just by getting water,” Hall said.

Hall, along with her TLE team, said she celebrates every time a well is completed. She added that the CARES Act funding has been a big collaboration.

“We can test those sites,” Hall said. “We can test them for quality, for depth – and that type of data we (didn’t) have access to. With this new data set, we’re able to help our communities plan for economic well-being as well as agriculture development and other types of development that require water.”

Mae Franklin’s family was the original dreamers in the stark land here in Na’ní’á Hasání where water is the single most precious resource.

“And not too long ago we started putting some more time here and developing it more with my family,” said Franklin, who helped develop Cameron Old Farm, where she will be planting onions, among other food, when the hoop house is finished.

“And also with the Cameron Agricultural ad hoc committee that we formed and we’ve been working with TLE, Ch’ishie Farms,” she said. “They’ve been really instrumental in helping us with this hoop house and they have knowledge of installing it in communities. I’m excited.”

Franklin said the focus of the Cameron Old Farm is to control food production and to build a healthier community by empowering locals to increase their economic, environmental, and personal sustainability.

“In Cameron, there are three stores that are open, and they are convenience stores (selling) mostly deep-fried stuff and canned food,” Franklin said. “We either have to go into Tuba City or to Flagstaff, so trying to get restocked with fresh produce is quite the effort. It’s the same story with water too.”

“So we’re still in the process of working on some of those things and we’re also gaining momentum with other partners like Choice Humanitarian,” Thompson added. “They’ve come into these future sites and they’re allowing us to put up more hoop houses on these existing sites that didn’t get a hoop house.

“Water is everything,” she said. “We couldn’t do it without water and we’re really grateful for all the watering sites.”

Thompson said the grassroots movement has the potential to become the breadbasket of Arizona and, if not, the Navajo Nation because when it comes to food and water, the movement has an especially powerful force.

“A lot of this work out in these communities would not be possible without people like Tyrone,” Hall said. “We have a couple of other grassroots leaders who led their rain catchment objective, and they’ve far exceeded our expectations as far as being able to install what’s essentially a gutter system on hogans, trailers, and other homes throughout this region.”

The region though is facing the prospect of farming without water because Tooh Bikooh, the Colorado River, has dwindled and its enormous reservoirs are half empty.

Research suggests that climate change will contribute to a further 20% drop in stream flow by 2050.

“That big snowpack that our grandparents and parents are used to, we don’t have those anymore and our monsoons have shifted so we can no longer rely on rain systems to flood our fields before we actually have to plant,” Hall explained.

“So these innovations, these different ways to use water in our communities has really had to change. And we really had to rethink some of the ways that we receive water.”

The Black Falls well sites are the first water sources ever developed for the community, according to Navajo Thaw, an extensive economic development plan to address the long-term impacts of the Bennett Freeze and forced relocations.

But only six of the production wells were completed and equipped. The test wells become a tool, said Malis-Clark, who works with her husband, a retired engineer, on the projects.

The CARES Act funding has brought benefits to Diné communities in Western Navajo and will continue to do so with an extension, according to TLE.

The extension would allow this grassroots movement to continue over the next several months using the remaining balance of around $960,000 to help more people with water and food as the COVID-19 pandemic continues.

“We have five more that are going to be up and going, some in Tolani Lake,” said local Marilyn Reed, director for the nonprofit Choice Humanitarian. “One in Black Falls, another in Coppermine – so all of these communities are getting water. Once you get the water, you need to use the water. With the hoop houses, this is a way for people to use the water they have been found.”

Reed added, “We’re not just going to put up hoop houses and then suddenly disappear. We want to provide training and capacity building and expertise in a lot of different ways, and help the people be successful.”

“Grow from it and learn from it,” he urged. “Make the best you can from out of it. Let’s move forward in our lives. We’ve gone through such a terrible sickness that’s among us, this COVID-19. It’s a real tragedy that we’ve lost so many people.”

Biakeddy on Jan. 15 paid tribute to his former TLE colleagues Bill Edwards and Judy Wilson, both of whom he said were backbones of TLE and who kept the organization going.

“If this (CARES Act) funding is anything, it’s a silver lining that will guide us forward,” Hall added. “We could easily go into despair. We could easily go into hiding but this team has been incredibly resilient, and we’ve taken this funding and really built our strength, our resiliency to this virus by increasing our access to nutrient-dense foods, increasing access to clean water, and ensuring that our people are able to stay home.”