Warning: Invalid argument supplied for foreach() in /homepages/16/d210685788/htdocs/wp-content/plugins/leaky-paywall/include/class-restrictions.php on line 650
 Victim specialists: the softer face of the FBI - Navajo Times

Victim specialists: the softer face of the FBI 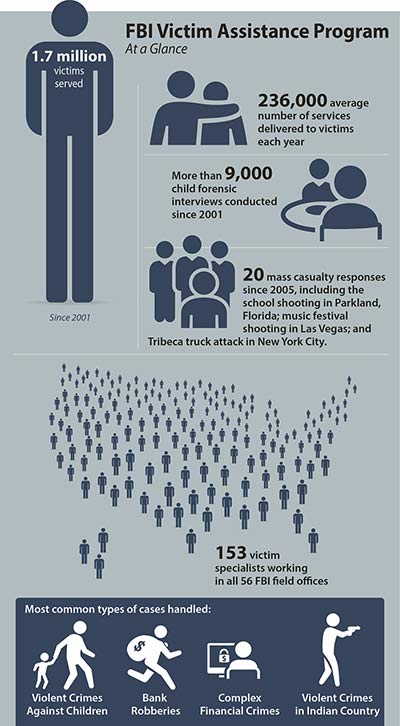 Data and graphic courtesy of the FBI

When most people think of the FBI, they think of hard-nosed investigators determined to track down a perp. But in the constant struggle between cops and criminals, there’s a third party who is often overlooked: the victim.

And the victim requires a softer approach. As part of National Crime Victims’ Rights Awareness Week, April 7 to 13, the FBI showcased its Victim Services Division, which since 2001 has been assisting victims of federal crimes throughout the investigation, the trial and beyond.

While perpetrators are only perpetrators while they commit the crime, “Victims are victims for life,” said FBI Special Agent Jenifer Mulhollen, who is stationed in Flagstaff.

“They have to keep dealing with what has happened to them.” When Mulhollen is called out on a case in which the victim might need some help, she calls Victim Specialist Sandy Rumore, one of seven victim specialists across the state of Arizona.