By Holly James
Special to the Times 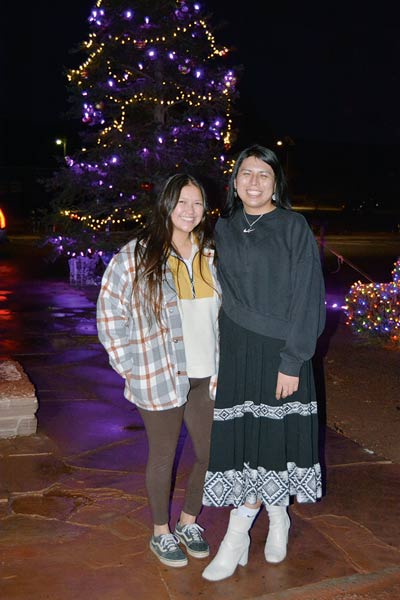 Kolton Nephew and SaraAnne Shirley, legislative staff assistants for the speaker’s office, volunteered for the decoration project. However, as soon as they began planning, the reality of the enormous effort quickly took hold.

On a chilly night freshly layered by the afternoon rains, Nephew and Shirley stood next to their canvas, the illuminated tree. As they began to reminisce about their decision, almost on cue, they turned to each other and let out vibrant giggles of relief as they started to explain their experience.

“We volunteered, it was asked who wants to decorate, and we raised our hands thinking, it’s decorating, this should be easy,” Nephew said. “We went into it with an initial plan, but that plan was quickly gone; there were so many variables and changing ideas, so from there, we let go of the plans and just went with it.”

He added they bounced ideas off each other.

“It was really way more than what I thought it would be,” Shirley said. “I didn’t realize how big of a job it turned out to be. The tree was the most stressful; trying to shop for giant ornaments took a lot of researching.”

Over two weeks, they began to plan and prepare for the event. Two full days were dedicated to taking storage inventory of prior year decorations, ensuring the lights worked, replacing any burned-out bulbs, gathering extension cords, checking for broken ornaments, unpacking ribbons, and tending to the smallest detail to the star on the tree.

Many of the decorations were recycled from last year, which helped keep the budget minimal. A few fellow staffers offered their help. One staffer was dedicated to wrapping all the presents to hand out to the kids and gifts that were used to decorate inside chambers. Timing the delivery of the tree was their marker that they were in the final stretch, where it all began to come together.

The Navajo Forestry Department provided the tree for the event, and NTUA employees delivered and erected the tree on Dec. 1. For safety precautions for the tribal employees, NTUA placed the ornaments on the tree.

Nephew and Shirley provided creative decoration guidance to the NTUA crew from below.

Inside the chamber, holiday-goers were greeted with hot chocolate, cookies, and baked goods. Families made their way through the display and were welcomed by Miss Navajo Nation Valentina Clitso, who gave gifts to the kids. Council Delegate Carl Slater’s voice came over the speaker, alerting the crowd that the lighting would begin in a few minutes.

With hot chocolate and cookies in hand, everyone went from the toasty chamber to the front of the tree. Slater and Clitso began the countdown, and the crowd joined in while fixating on the tree’s shadow. The anticipation could be felt on the faces of the little ones, smiling, their eyes looking as high as they could, and counting loud for all to hear.

In all its glory, the tree was illuminated right on cue; all that could be heard was a brief inhale of silence followed by a harmonious “ooh,” of satisfaction from the crowd. Some elders who were viewing the lighting from their cars were honking their horns and blinking their lights in appreciation as they weathered the chill from their warm chidí.

“Seeing the kids smiling faces; that really meant a lot,” Shirley said. “After we turned the lights on, and everyone went, ‘ooh.’ We looked at each other and said, ‘We did it; we saved Kéeshmish.’”

The two giggled and hugged, satisfied with the outcome and their hard work.

The holiday tree and luminaria display will be available for viewing through New Year’s Day.